Update: Gold extended the previous day's rejection slide from the very important 200-day SMA and witnessed some follow-through selling on Wednesday. The downward trajectory dragged the commodity to over one-week lows, around the $1,795 region in the last hour and was sponsored by a combination of factors. As investors assess the economic impact of the fast-spreading Delta variant of the coronavirus, a positive tone around the equity markets acted as a headwind for the safe-haven XAU/USD.

The risk-on flow was reinforced by a strong follow-through uptick in the US Treasury bond yields, which further contributed to driving flows away from the non-yielding gold. In fact, the yield on the benchmark 10-year US government bond shot to fresh weekly tops and underpinned the US dollar. This, in turn, was seen as another factor exerting some downward pressure on dollar-denominated commodities, including gold.

In the absence of any major market-moving economic releases from the US, the broader market risk sentiment will play a key role in influencing the commodity. Traders might further take cues from the US bond yields and the USD price dynamics to grab some short-term opportunities around gold.

Previous update: Gold price is extending previous losses following the rejection at the critical SMA200 one-day resistance at $1825. The rebound in the US Treasury yields is weighing on the yieldless gold amid risk-on sentiment, as the European market rises on strong earnings and positive close on Wall Street overnight. Meanwhile, broad-based US dollar strength also keeps gold price undermined, with the Delta covid variant concerns boosting the dollar’s safe-haven appeal. The greenback also draws support from the uptick in the yields, as the focus now shifts towards the US Senate’s early test vote on President Joe Biden’s infrastructure bill.

Gold’s fate hinges on the outcome of the key vote due later in the day and the dynamics in the yield and the dollar amid incoming virus updates and earrings reports. For now, the King dollar remains in a win-win situation, as a drive for safety remains in the backdrop.

The Technical Confluences Detector shows that gold price is heading towards minor support around $1802, which is the convergence of the pivot point one-day S1, Bollinger Band four-hour Lower.

A sharp drop towards Bollinger Band one-day Middle at $1796 cannot be ruled on a breach of the latter.

The sellers will then need to clear a dense cluster of support levels around $1793, where the SMA100 one-day, pivot point one-day S2 and the previous week’s low meet.

The intersection of the Fibonacci 23.6% one-month and pivot point one-week S1 at $1790 will test the bearish commitments.

Acceptance above the latter will call for a test of the $1819 level, the confluence of the SMA5 one-day and Fibonacci 38.2% one-week. 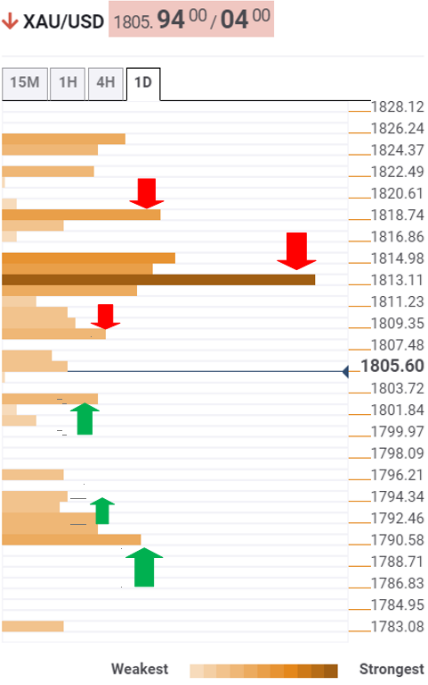