Update: Gold struggled to capitalize on its intraday positive move, instead met with some fresh supply in the vicinity of the $1,800 round-figure mark. The US dollar built on the post-FOMC rally and shot to over two-month tops. This, in turn, was seen as a key factor that undermined demand for dollar-denominated commodities, including gold.

It is worth recalling that the Fed took a sudden hawkish turn on Wednesday and brought forward its projections for the first post-pandemic interest rate hikes to 2023. The Fed also indicated that it will soon work on tapering down the current $120 billion in monthly bond purchases. This was seen as another factor weighing on the non-yielding gold.

That said, a combination of factors might help limit any deeper losses for the XAU/USD, at least for the time being. Currently hovering around the $1,775 region, the ongoing decline in the US Treasury bond yields might extend some support to the non-yielding yellow metal. Apart from this, a fresh leg down in the equity markets might further hold traders from placing any aggressive bearish bets around the safe-haven gold.

Nevertheless, the commodity remains on track to end the week with heavy losses and remains vulnerable to slide further. Sustained weakness below the overnight swing lows, around the $1,768-67 region, will reaffirm the bearish bias and prompt some aggressive technical selling. The next relevant support is pegged near the $1,755 horizontal level before gold eventually drops to the $1,725-20 region.

Previous update: Gold price is rebounding over 1% on the last day of this eventful week, although remains on track to book a 5% loss on the weekly basis. The retreat in the US Treasury yields is boding well for gold price, as it recoups a part of the Fed-led blow. Earlier this week, the Fed unexpectedly turned hawkish and signalled two rate hikes in 2023, which weighed negatively on non-yielding gold. Meanwhile, the US dollar index clings onto two-month highs heading into the weekly closing.

Gold price is likely to remain influenced by the dynamics in the yields and the dollar and a light economic calendar. Broader market sentiment amid quadruple witching will also impact gold price.

Read: Gold is bearish below 1790 zone

The Technical Confluences Detector shows that gold price is staging a decent comeback towards the $1797 resistance area, where the Fibonacci 61.8% converges with the SMA10 four-hour.

Further up, the bulls will challenge the $1800 round number.

Alternatively, a bunch of minor support levels offers immediate support around $1789, which is the intersection of the Fibonacci 38.2% one-day and the Bollinger Band one-hour Upper.

The previous low on the four-hour at $1776 remains the last hope for the gold bulls. 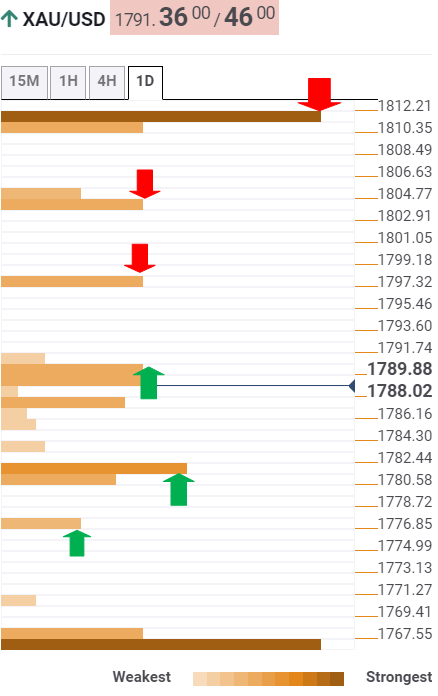