Where is the bottom? That is the question asked by those trading gold – and any other asset that is denominated in US dollars. The greenback's rise has been relentless following the Federal Reservel's hawkish decision on Wednesday. The world's most powerful central bank is moving toward printing fewer dollars and raising rates sooner rather than later.

The precious metal has an inverse correlation with America's currency and it is sliding despite a retreat in bond yields. How is XAU/USD positioned on the technical charts?

The Technical Confluences Detector is showing that gold has critical support at $1,766, which is the convergence of the previous month's low and the Bollinger Band one-hour lower.

Further down, a soft cushion awaits at $1,751, which is where the Pivot Point one-day Support 1 hits the price.

Looking up, initial resistance is at $1,781, which is the confluence of the Simple Moving Average 10-15m and the Fibonacci 23.6% one-day. 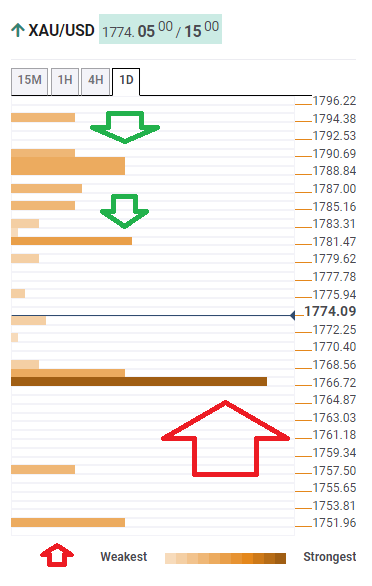