Gold maintained its offered tone through the first half of the European session and was last seen trading around the $1815 region, just above near three-week lows set earlier this Thursday.

Given this week's breakthrough a short-term ascending trend-line, a subsequent weakness below the $1830 horizontal levels supports prospects for a further near-term depreciating move. Hence, a fall back towards challenging 2021 lows, around the $1800 mark touched on January 18, looks a distinct possibility.

Meanwhile, technical indicators on the daily chart have been gaining negative momentum and are still far from being in the oversold territory. Hence, some follow-through selling below the mentioned level might be seen as a fresh trigger for bearish traders and pave the way for an extension of the downward trajectory.

The next relevant target on the downside is pegged near the $1787-86 area before the XAU/USD eventually slide to test November 2020 swing lows, around the $1765-64 region.

On the flip side, the $1830 level now becomes immediate resistance. Any further recovery might be seen as a selling opportunity and remain capped near the ascending trend-line support breakpoint, around the $1848-50 region. The latter coincides with the very important 200-day SMA and should now act a key pivotal point for short-term traders. 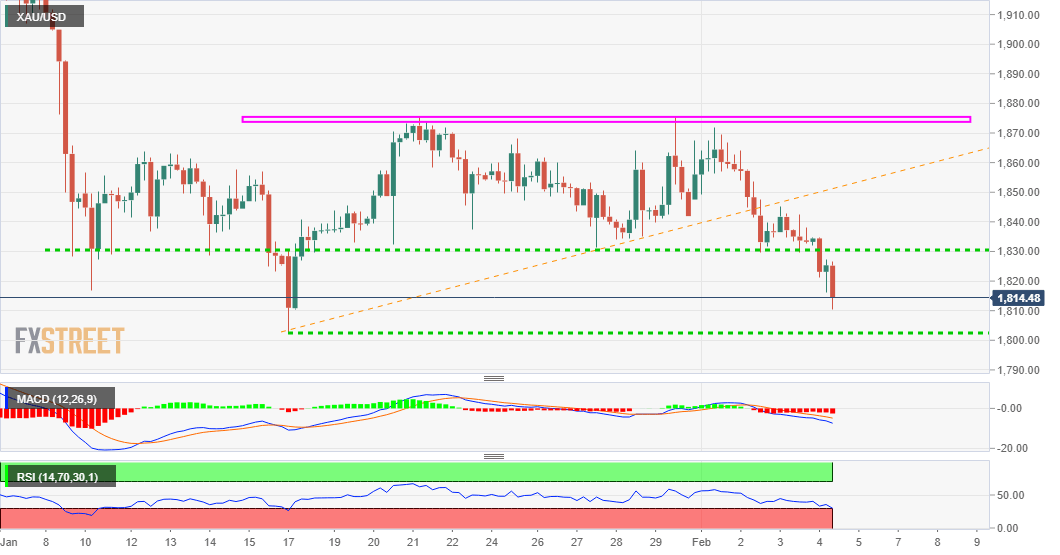