The improved sentiment in the risk-associated space is now motivating the ounce troy of the precious metal to slip back to the $1,550 area, or daily lows.

Gold weighed down by USD, risk

The yellow metal is extending the choppy performance so far this week amidst the better mood in the riskier assets, particularly following the recent signing of the ‘Phase 1’ trade deal between China and the US.

Also adding to the ongoing pullback, the greenback has regained some buying interest on the back of above-estimates results from Retail Sales, the Philly index and Initial Claims, which have somewhat reversed the pessimism following December’s inflation figures (released earlier in the week).

However, occasional weakness in the metal could be seen as temporary in light of the expected US-China trade frictions under the future negotiations of the ‘Phase 2’ deal and unremitting geopolitical concerns mainly in the Middle East.

GBP/USD is rising toward 1.3450, the highest since September, shrugging off Brexit concerns. France may reportedly veto a deal if it sees too many compromises from the EU. The final US Services PMI, vaccine developments and US data are all awaited.

The EUR/USD pair is firmly advancing beyond 1.2100, trading at levels that were last seen in April 2018. The dollar is under pressure amid hopes for US fiscal stimulus and an upcoming vaccine. Investors are shrugging off Germany's extended restrictions.

US Initial Jobless Claims Preview: What was old is new again 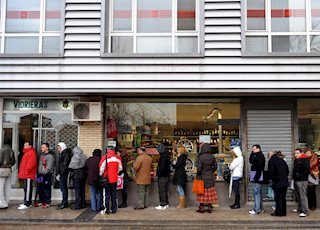 Jobless claims are again at the center of concerns about the US labor market and by extension the economic recovery. A increase of 67,000 in the last two reporting weeks is assumed to come from the new business restrictions in states with rising COVID-19 counts.