The GBP/USD pair nursed the previous session's post-BoE losses to two-week lows, with bears still awaiting a sustained break below the 1.2800 round figure mark.

The pair added to its recent losses and witnessed some follow-through selling on Thursday in reaction to the BoE MPC's 7-2 vote split to keep interest rates unchanged at 0.75%. The outcome suggested that the BoE is poised to change its stance on monetary policy and kept exerting some pressure on the British Pound.

On the other hand, the US Dollar failed to capitalize on the overnight strong positive move to near one-month tops and was being weighed down by a modest pullback in the US Treasury bond yields amid conflicting trade-related headlines, which seemed to be the only factor that helped limit deeper losses for the major.

Officials on Thursday that China and the United States have agreed to roll back tariffs on each others' goods in a "phase one" trade deal if it is completed. However, reports suggested that the subject of rolling back tariffs faced fierce internal opposition in the White House and raised some scepticism about a trade deal.

Hence, it will be prudent to wait for some strong follow-through selling below the 1.2800-1.2790 region before traders start positioning for any further near-term depreciating move towards challenging the 1.2700 round-figure mark amid absent relevant market moving economic releases from the UK.

Later during the early North-American session, the US economic docket – highlighting the preliminary release of the Michigan Consumer Sentiment Index for November – will be looked upon for some short-term trading opportunities on the last day of the week. 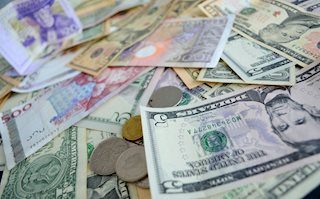