The EUR/GBP cross built on this week's positive move and gained traction for the fourth consecutive session on Thursday. The momentum pushed the cross to one-and-half-week tops, around the 0.8640-45 region during the first half of the European session.

The mentioned area marks a downward-sloping trend-line, extending from the 0.8715-20 region touched in April. This, along with strong horizontal support near the 0.8565-60 zone constitutes the formation of a bearish descending triangle on the daily chart.

The EU-UK collision over Norther Ireland protocol, along with fresh coronavirus jitters continued acting as a headwind for the British pound. This, in turn, supports prospects for an eventual breakout to the upside, though bulls seemed reluctant ahead of the ECB.

Meanwhile, technical indicators on hourly charts have been gaining positive momentum and have also recovered from the bearish territory on the daily chart. This further adds credence to the near-term positive outlook for the EUR/GBP cross. Some follow-through buying beyond the 0.8645 region (triangle resistance) will reaffirm the constructive set-up and lift the cross further towards the 0.8670 area. The momentum could further get extended and allow bulls to reclaim the 0.8700 mark.

On the flip side, any meaningful pullback might now be seen as an opportunity to initiate fresh bullish positions. This should help limit any further downside, rather assist the EUR/GBP cross to defend the 0.8600 mark, at least for the time being. A sustained break below will negate the positive bias and turn the EUR/GBP cross vulnerable to slide back to retest the 0.8565-60 support, marking the lower end of the mentioned descending triangle. 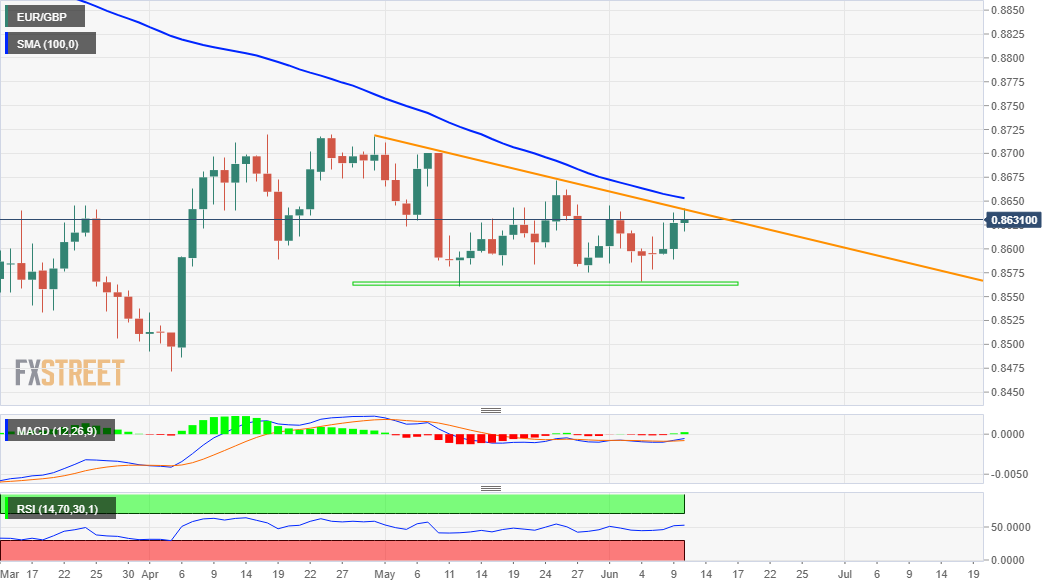