EPA:AXA has been a steady stock to own during the COVID-19 pandemic, and despite a dip back in March, shares have been fairly level compared to other publicly traded companies. On Thursday, AXA fell by 0.57% as it took a brief pause from a positive rally that has been taking place over the last months or so since the stock plummeted near the end of October. Like many companies, AXAHY has seen its business directly affected by the coronavirus pandemic that is now experiencing a renewed wave in Europe, but especially in its home country of France where they have seen over 520,000 new cases in the last 14 days.

AXAHY is an insurance giant in France although it operates in many countries around the world. Like with many companies in the insurance sector, AXA has been hit hard by a lack of travel both domestically and internationally throughout the pandemic. Insurance for travellers is a key part of their business and revenues streams, and just as the airline and hotel industries have suffered, so too have insurance companies. Currently, a majority of the analysts that cover Axahy as a stock have a buy rating on the company, as positive developments in terms of a COVID-19 vaccine have boosted optimism for a return to normalcy in 2021. 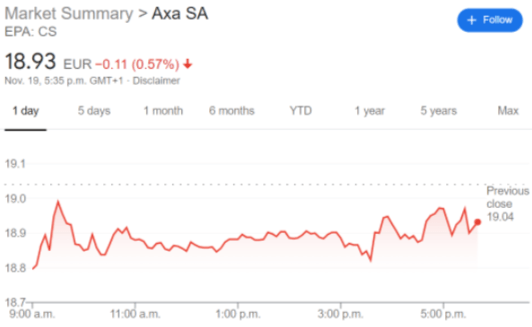 AXA SA is currently embroiled in accusations of not paying taxes in the country of Luxembourg during the early part of the 21st century. While it is never great publicity for this type of news to emerge, AXA is adamantly disputing the ruling that was made in court. While this should not have a direct impact on Axa moving forward, events like this can sometimes give pause to investors who are on the fence about investing in a company.

EUR/USD advances after US PCE inflation

EUR/USD pressures weekly highs as US core PCE inflation jumped to 3.4% YoY in May, as expected. High yielding assets accelerate their advances to the detriment of the greenback, as government bond yields hold steady.

GBP/USD remains depressed around 1.3900, pressured by the dovish BOE's surprise offsetting the renewed weakness in the US dollar. Worsening market mood amid Delta covid strain concerns weigh on the pound

Gold is picking up the bid tone in European trading, taking advantage of the retreat in the US Treasury yield and the dollar across the curve.

SafeMoon price has underperformed relative to top altcoins but is preparing for a move higher. A retest of the range low at $0.00000257 seems likely before SAFEMOON catapults.