Update 2: AMC shares continue to fall post the announcement from the company of an 11.55 million share offering. AMC has been tapping the market repeatedly over the last number of months as it needs extra cash to offset the lack of revenue due to the pandemic. Share sales are dilutive so usually not well received by investors. In the case of AMC those share sales have probably keep the company afloat so it is a double edged sword. AMC shares are down 20% at the time of writing at $51. The shares had dropped to nearly $40.

Update: Well, we do have to give ourselves a pat on the back. I am sure all of you read our comments below about doing a further capital raise, and who would have thought the main man, CEO Adam Aron, would take our advice and do exactly that shortly after we published. He must be an avid reader of our work! Enough joking around, but it was the smart thing to do given the volume and ease with which a share sale can be achieved. AMC can raise cash and use it for strategic acquisitions, improve its balance sheet, etc. The conditions may never be as favourable again, although shares were down as much as 10% in Thursday's premarket after the share sale announcement.

AMC shares have done it again and can truly lay claim to being the meme stock king. Gamestop who? AMC has totally dominated the retail meme stock rally with incredible gains as the stock smashed through the January high, which was called the GameStop rally.

Some GameStop protagonists ended up before congress, and GME is due to have a movie made about the saga. Seeing as how AMC owns those cinemas though, GameStop is now destined for a supporting, bit-part role. AMC caused some fury on Tuesday as it became clear that Mudrick Capital had done what appeared to be a nice turn on its investment with a quick day trading profit most would have been proud of.

However, now it is clear Mudrick left quite a few crumbs on the table, crumbs which were quickly devoured by the #AMCAPES, as the beast was roused and drove the stock higher in a frenzy of activity. Volumes again surged to new highs and dominated the New York Stock Exchange. AMC now finds itself in a position where it really could quite easily raise more cash as shareholders actually seem to reward it for doing so. Raising cash and issuing shares is dilutive to existing shareholders, so companies are usually loath to do so.

However, raising cash has enabled AMC to stave off bankruptcy, and it is not always a bad thing. Improving your debt profile, maturity and interest rate payments are positive balance sheet restructurings as are acquisitions that add to the bottom line in terms of revenue generation and possible diversification. At the current share price and volume levels, a quick further cash raise could be easily achieved, but does AMC actually need any more cash now?

It could buy out some of its landlords, pay down its debt or acquire some complementary businesses, of which there are now many that it looks down on in terms of market capitalization. AMC is now larger than nearly half the S&P 500 and is bigger than such notables as State Street. There are opportunities out there as AMC CEO Adam Aron alluded to on Twitter on Tuesday, saying AMC was going on the offense. Raising cash may now actually be the easy part, putting it to good use might be trickier.

But for now, the CEO can do no wrong in the eyes of shareholders.

Where to from here for AMC share price? It is tempting to give the easy answer and say the shares are way overvalued, it is a bubble... but that is not really helpful to the readership. FXStreet is not here to comment on the rights, wrongs, or otherwise of traders' whims but merely to try and help identify the trend, key levels so traders have more knowledge at their firepower. By now most know that this is a frenzy with stretched valuations. Traders should take caution, exercise good risk management, and know what they are buying into.

Many bubbles have been sneered at in the past, Indeed, Amazon was cited as an extreme bubble during its early existence as was Tesla. AMC does seem to be a different case with a more difficult turnaround and is not a start-up but in terms of a momentum play, it is exactly the type of volatility that the current wave of young retail traders thrives on.

AMC had been building to some form of breakout during May as it formed a triangle pattern that FXStreet successfully identified. We commented several times on the importance of breaking the $14.54 level but certainly could not have foreseen how things progressed.

In our May 26 article we prophetically titled "AMC breaks $14.54 resistance, to the moon next resistance" we added that AMC shares "taking out $14.54 was an extremely bullish move and sets up some intermediate resistance at $17.25, the high from Feb 1. Above there, AMC will test the r/wallstreetbets high of $20.36 and the next resistance level is the high from September 2018 at $21.44".

This target identified by FXStreet seems trivial now when you see AMC surge through $75 in Thursday's premarket. But clearly, we had the right idea. How high this can go is beyond forecasting now. Taking a longer-term monthly view shows the move in all its glory and shows Relative Strenght Index (RSI), Commodity Channel Index (CCI), and Williams %R as hugely overbought, at record overbought levels. Like all good things, this will likely come to an end to please have a plan and risk management in place if or when it does. 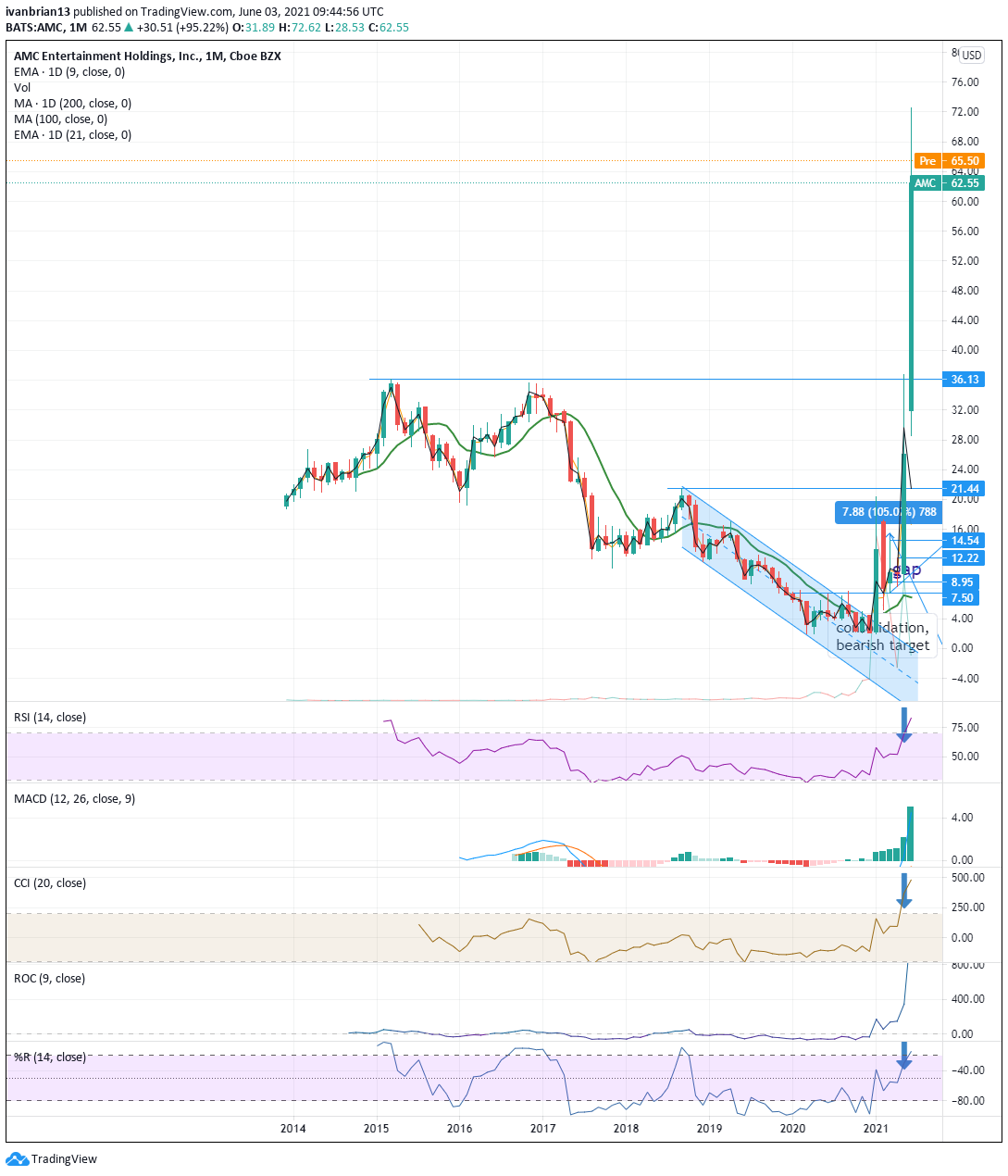 The author is long puts in AMC, how embarrassing!