Chart patterns are one of the most effective trading tools for a trader. They are pure price-action, and form on the basis of underlying buying and selling pressure. Chart patterns have a proven track-record, and traders use them to identify continuation or reversal signals, to open positions and identify price targets.

Chart patterns are specific price formations on a chart that predict future price movements. As technical analysis is based on the assumption that history repeats itself, popular chart patterns have shown that a specific price movement is following a particular formation of price (chart pattern) with high probability. Therefore, chart pattners are grouped into (1) continuation patterns – that signal a continuation in the underlying trend, and (2) reversal patterns – that signal reversal of the underlying trend.

In this article, we will show the top 10 chart patterns that every trader should know. The first part will reveal the reversal patterns and how they are used. 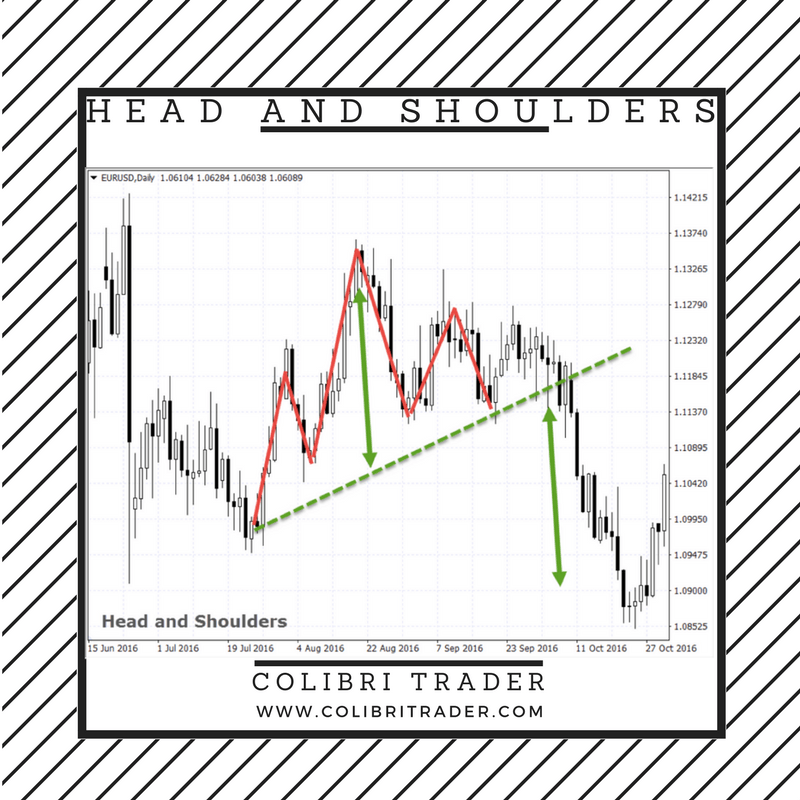 Head and Shoulders is a reversal chart pattern, that indicates the underlying trend is about to change. It consists of three swing highs, with the middle swing high being the highest (red lines on the chart). After the middle swing high, a lower high occurs which signals that buyers didn’t have enough strength to pull the price higher. The pattern looks like a head with a left and right shoulder (the three swing highs), and that’s how it got its name. The neckline is connecting the two shoulders, and a break-out below the neckline is considered a selling signal, with a price target being the distance from the top of the head to the neckline (green arrows). If the Head and Shoulders pattern occurs during a downtrend, the same inverse pattern (with three swing lows) is called an Inverse Head and Shoulders pattern. 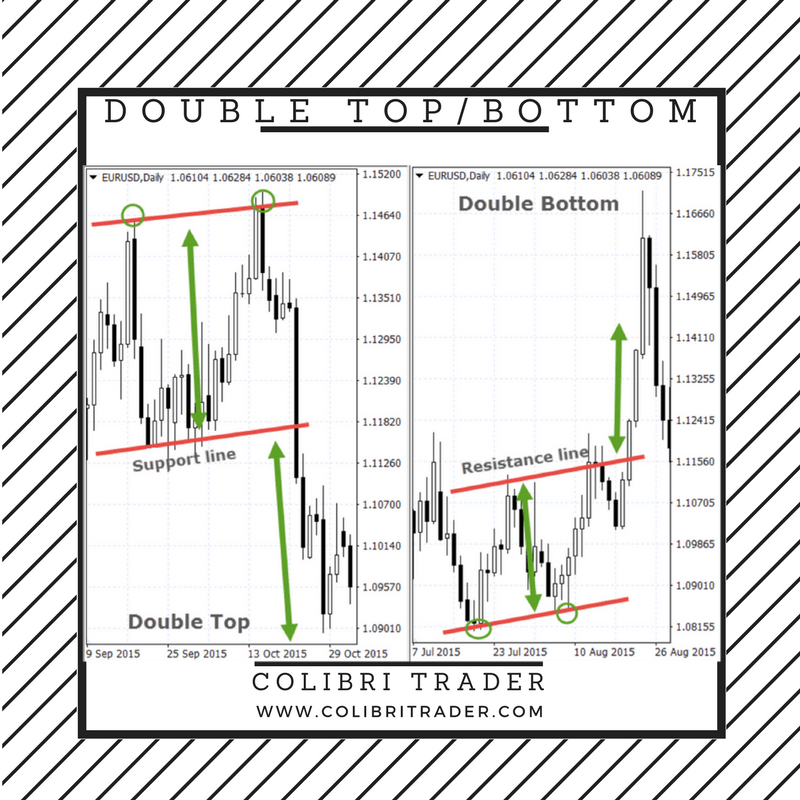 Double Top and Double Bottom are another reversal pattern, occuring during up- and downtrend, respectively. A double top, as the name suggests, has two swing highs at about the same, or slighty different price. It shows that buyers didn’t manage to push the price higher, and a trend reversal might be ahead. The trigger signal for opening a sell position is the break of the support line, with target price being the distance between the top and the support line of the formation. A double bottom pattern is the opposite, with two swing lows. Sellers didn’t have the power to move the price more downward. The trigger signal is the break of the resistance line, with the target price being the distance between the bottom and the resistance line. 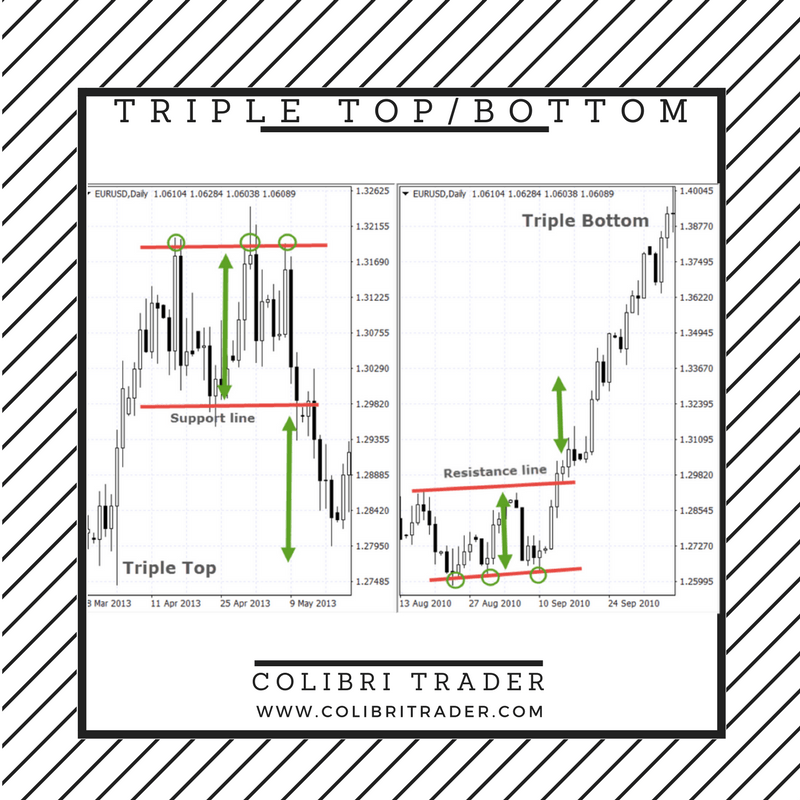 Triple Top and Tripple Bottom formations are basically the same as Double Top and Double Bottom formations. Both are reversal patterns, with the difference that Triple Tops and Bottoms have three swing highs and swing lows, respectively. Trigger signals are again the break of support and resistance lines, with target prices being the distance between the top and support line (for Triple Tops), and bottom and resistance line (for Triple Bottoms). 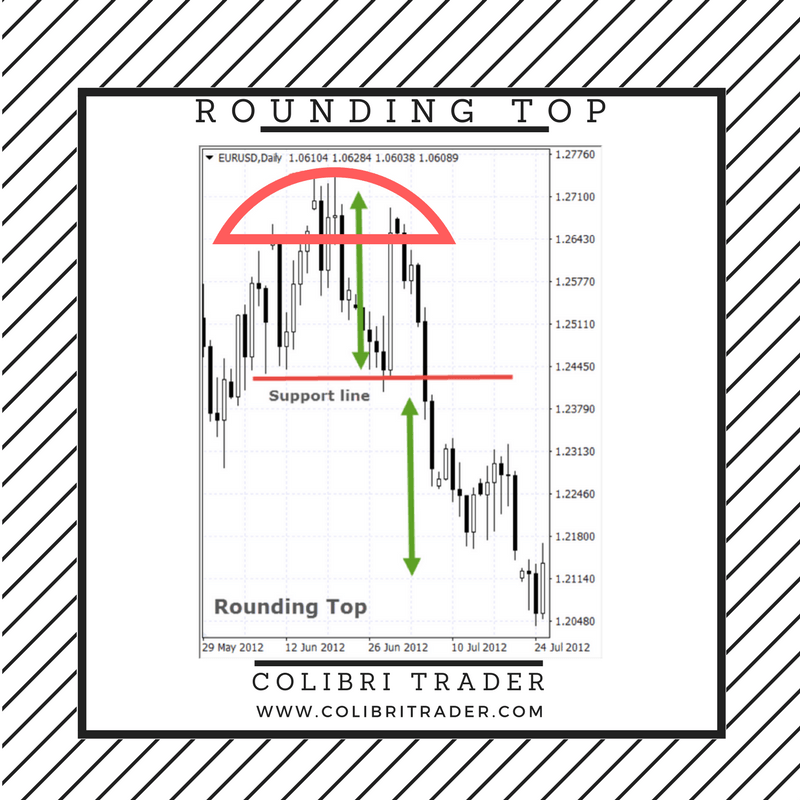 A Rounding Top pattern takes a little longer to form then the other mentioned chart patterns. It shows a gradual change of the sentiment from bullish to bearish. The price forms gradually a „rounded top“, as can be seen on the chart. The trigger for entering a short position is the break of the support line, with the price target equal the distance from the top to the support line. 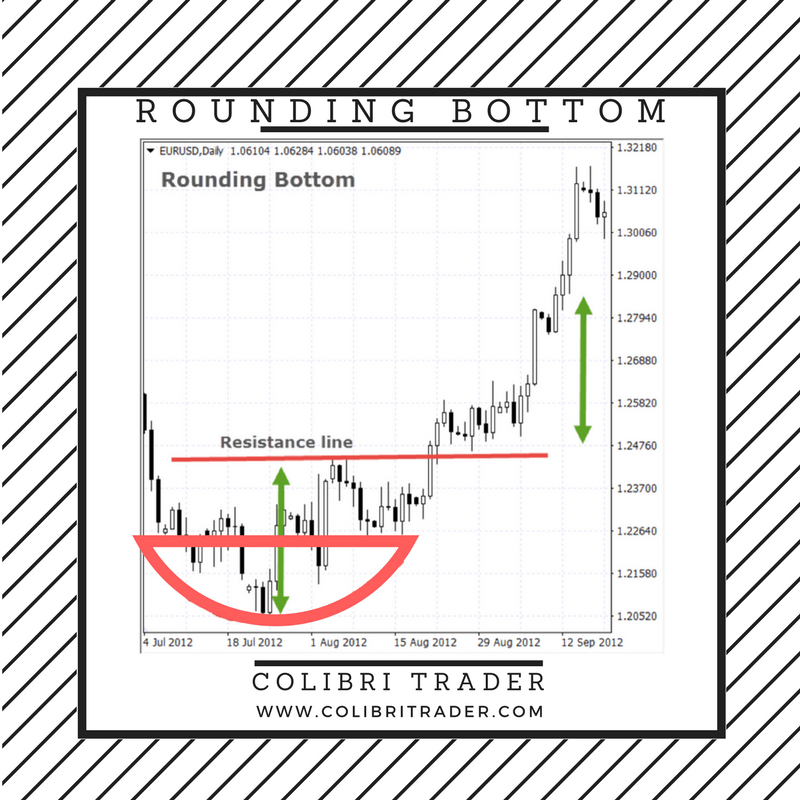 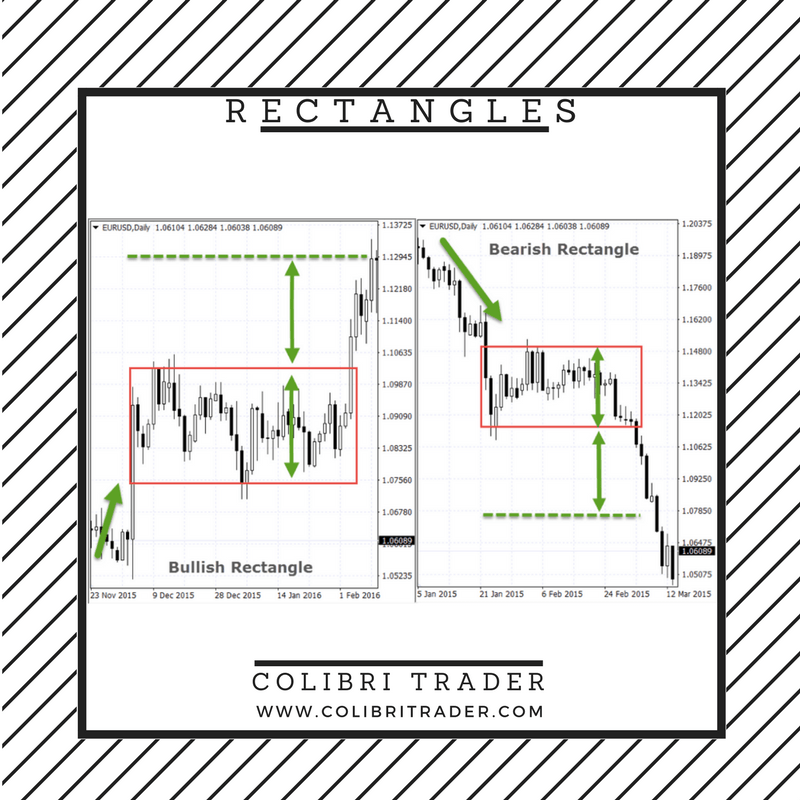 A rectangle is a continuation pattern, which means it confirms that the underlying trend should continue. It is divided into bullish and bearish rectangles, depending on the underlying trend. A bullish rectangle appears during an uptrend, when the price enters a congestion phase, during a sideways trading. The price will likely break out in the direction of the preceding trend. The trigger signal is the break of the upper line of the rectangle, with the price target being the height of the rectangle. For the bearish rectangle, the opposite rules apply. It forms during a prevailing downtrend, when the price enters a congestion phase and trades sideways. This means the trend will most likely continue downwards, with the break of the lower rectangle line. The price target is again the height of the rectangle. 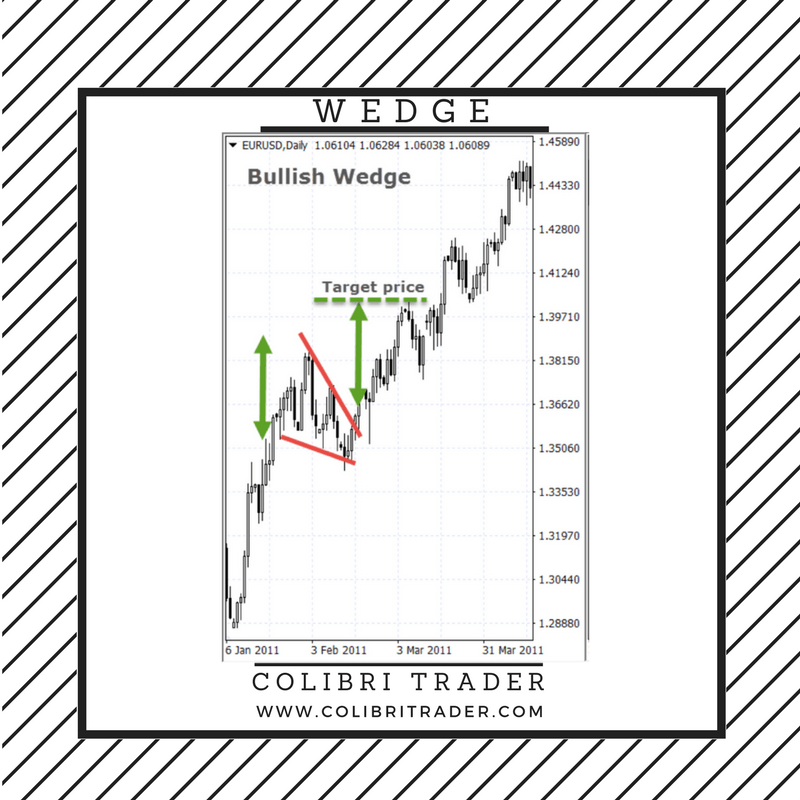 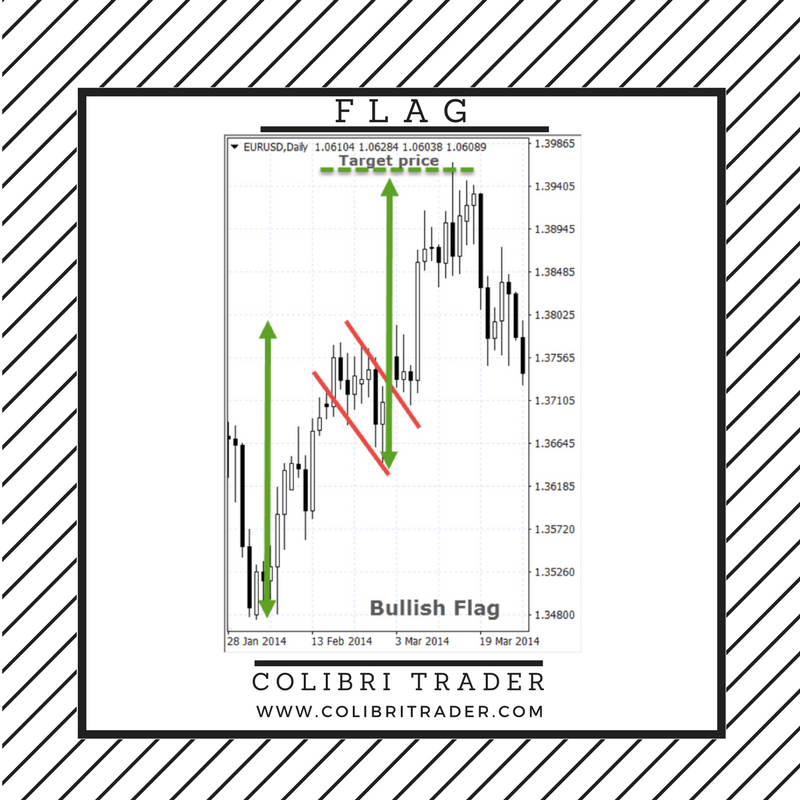 A flag is very similar to a wedge, with the difference that the trendlines which form the flag are parallel, and not converging. A flag pole is also a part of the flag pattern, because the target price is measured in a different way than by other chart patterns. Flags can be bullish and bearish, with a bullish flag shown on the chart above. A bullish flag forms during an uptrend, with parallel trendlines above and below the price-action, which form a down slope. A break-out above confirms that the uptrend is resuming. A bearish flag is pretty much the same as a bullish flag, with the difference that it forms during downtrends and has an up slope. The price target is measured as the height of the flagpole (green arrow) to the top of the flag, which is then projected to the lowest point of a bullish flag (or heighest point of a bearish flag). 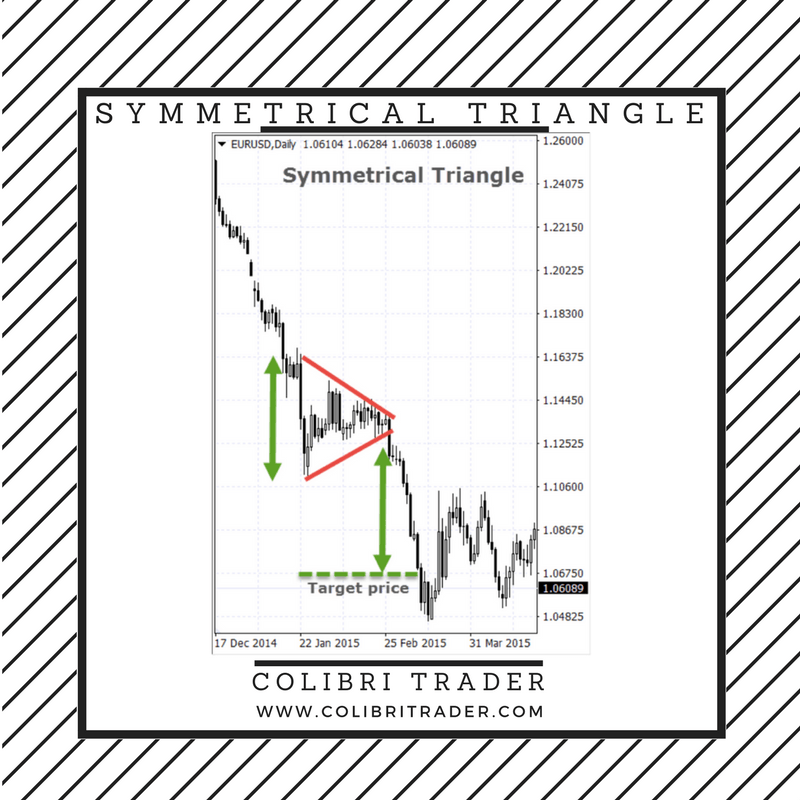 Triangles can be ascending, descending and symmetrical. All three types of triangles look pretty much the same, with the difference that ascending triangles have a flat upper trendline, and descending triangles a flat lower trendline. A symmetrical trendline is the most common, and forms during both up- and downtrends. It has converging trendlines, just like a wedge pattern, but the slope is neither pointing up or down. The breakout point of the lower trendline during downtrends confirms that the downtrend is resuming, while a breakout of the upper trendline during uptrends confirm the underlying uptrend. The target price is the height of the triangle, projected to the point of the breakout. 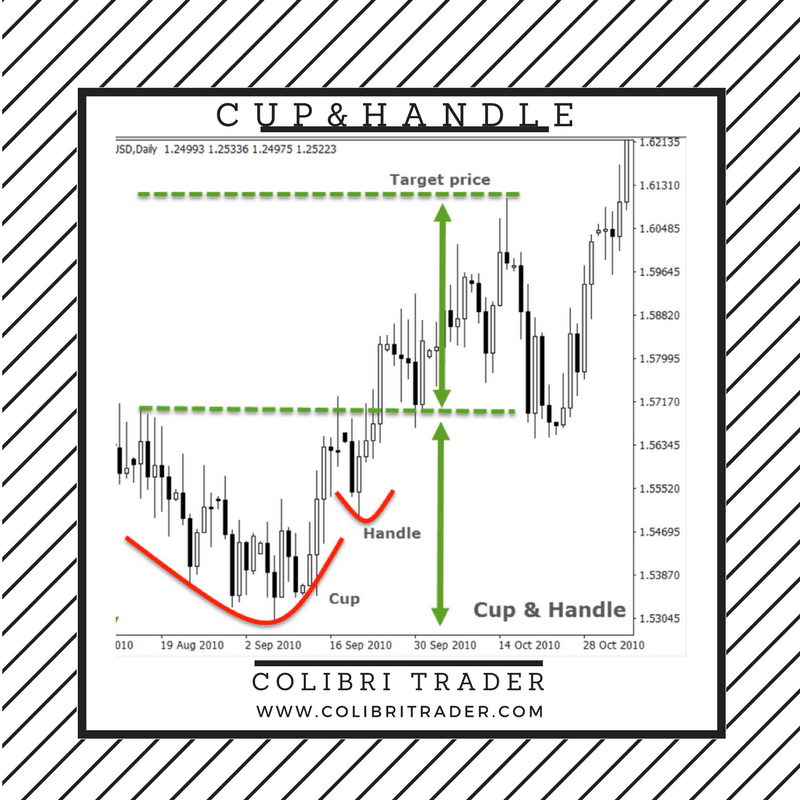 I have written this article with the main aim to show you another angle of trading. As can be seen, these chart patterns might help you determine trend direction, but you should not rely solely on them. I have covered the major 10 chart patterns every trader should know. I believe that these are the most important ones, but if you feel like I have omitted an important one, please share with the rest of us in the comments below. Once again- as I have outlined in my previous articles, you should take everything with a grain of salt. No indicator is good by itself or trading system is successful enough if placed in the wrong hands. You should find what works for you and stick to it.

The EUR/USD pair is displaying a lackluster performance below the round-level resistance of 1.0800 in the Asian session. The major currency pair has turned sideways, following the footprints of the subdued US Dollar Index (DXY). A volatility contraction in the USD Index is expected by the market participants after a one-sided vertical move on Friday.

AUD/USD is finding its footing while extending the rebound toward 0.6950 amid the upbeat Australian Retail Sales data. The Aussie shrugs off the looming US-China tensions even as Chinese stocks are down over 1% so far. Pre-RBA anxiety could keep AUD bulls on the edge.