Momentum works across all markets

One of the greatest anomalies in finance is that momentum works. Momentum – the strategy of buy high, sell higher or sell low and sell lower – is one the great mysteries of the market because it works on every asset, every market every time frame.

There have been numerous academic studies to prove this point across a variety of US and international databases going back a century or more. No less than the father of Efficient Market Theory Eugene Fama noted the following, “ The premier market anomaly is momentum. Stocks with low returns over the past year tend to have low returns for the next few months, and stocks with high past returns tend to have high future returns.”

The outperformance is massive. As this graphic from Larry Swedroe and Andrew Berkin shows, the pick up premium wallops all other factors.

Momentum works because human beings are social animals no different than schools of fish. When aggregated into a large gathering such as the market investors will begin to act in unison sometimes driving prices to seemingly insane levels way beyond rational valuation.

This year alone we’ve seen two extreme cases of momentum with GameStop (GME) and Bitcoin (BTCUSD) and perhaps even Tesla (TSLA) as investors plowed into each instrument at any available price. In some cases the moves were coordinated in others they were simply expressions of the general mood but in all instances the power of momentum created outsized returns that far surpassed the market averages.

One of the great ironies of momentum is that while it works well on assets, it is almost always a terrible strategy on asset managers. In addition to chasing price, investors love to chase performance by giving their money to the hottest performing fund manager. That is perhaps the single worst bet they can make.

Study after study after study has shown that investment performance tends to mean revert rather than trend. Investment managers who were in the top decile in the current year were almost always absent from the leaderboard five years forward. In fact the only strategy that seems even more profitable than momentum is mean reversion on money managers. Academics have shown that best performers in one year have often wound up in the lower half of the table two or three years forward, while the worst performers often returned back to the top. 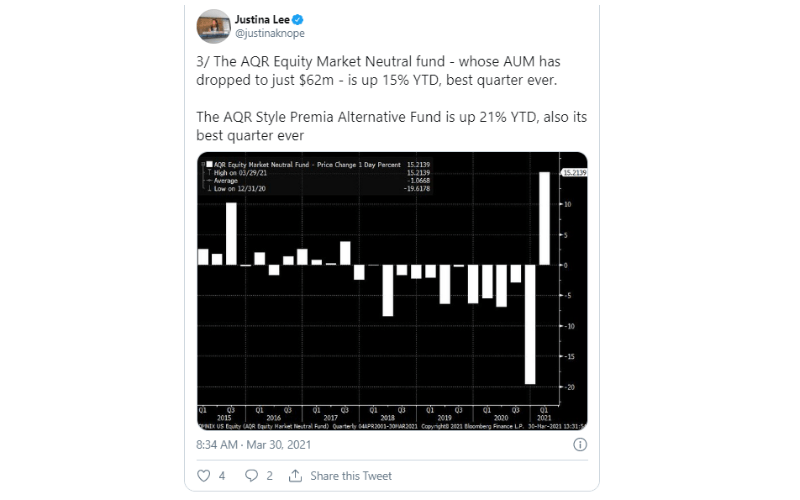 This thesis was once again proven right by the recent news that the AQR family of funds which has been eviscerated by terrible performance and near universal fund outflows just had its best quarter ever.

USD/JPY drops below 110.00 after uninspiring US data

USD/JPY is edging lower for the second straight day on Tuesday. Durable Goods Orders in US rose less than expected in June. US Dollar Index stays in the negative territory near 92.50.