In today’s difficult and especially unpredictable trading environment, one of the best tools to help you find exit and entry signals might incorporate a practical Fibonacci retracement strategy in conjunction with other widely used technical indicators such as support and resistance levels, MACD and momentum indicators such as RSI.

Fibonacci retracement works well using MACD because the parameters of market swings can be pre-set with the moment indicator (MACD) confirming a reversal in the trend.

Take for example the USD/JPY chart below: 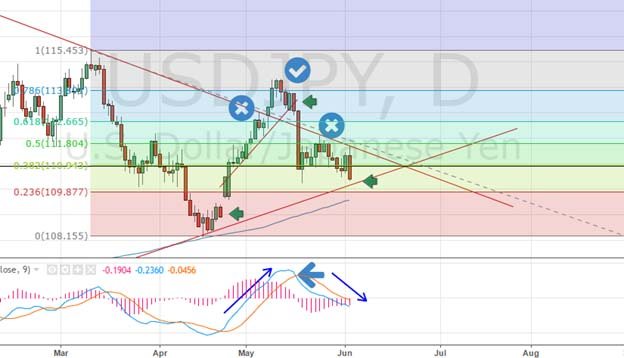 Around mid-April the price bottoms out and bounces up from the long-term upwards trending support line. The price stabilises and the MACD indicator produces an upward cross. The combination of these important signals might convince a trader to jump in long at the first green arrow.

As the price moves up with momentum, it becomes clear that the limits of the short-term range are in place and Fibonacci lines can be drawn over the chart.

The first challenge to the upwards price momentum occurs at the first blue cross set at the 0.618 Fibonacci level. A trader might plausibly argue that the move has run its course and can go no further than the long term downwards trending resistance line. However, the MACD indicator says otherwise and signals the US dollar still has legs. In this case, indicators working hand in hand, we can see that a correct exit sign has yet to be produced and a wiser trader would hold the position.

The price then breaks out up past resistance and hits the 0.718 Fibonacci level where it stalls. This is the level before the currency fully retraces and presents a formidable trial.  At this point momentum and MACD starts to stabilise. The price falls slides below a minor support line and the MACD throws up a downwards cross.

CombiningFibonacci, MACD and resistance/support we obtain a solid exit point, which is also ashort entry signal indicated by the second green arrow. The wise trader then swaps the buy position for a sell.

Finally, as the price heavily drops back into the long-term triangulating range it immediately bounces up to hit the long term downwards trending resistance line indicated by the second blue cross and the 0.50 Fibonacci level. The calm trader would hold the short position as the MACD indicator foretells further selling pressure. After a couple of days, the price continues its journey south towards the upwards support line which is another exit (and potentially entry) signal indicated by the third green arrow. If the MACD crosses over at this point, it would then confirm the swing.

The Fibonacci Retracements at 23.6%, 38.2%, 50% and 61.8% stem from ratios found within the Fibonacci sequence. The 50% retracement is not based on a Fibonacci number. Instead, this number stems from Dow Theory's assertion that the Averages often retrace half their prior move and represents an important level.

Fibonacci works well with momentum indicators such as the relative strength index (RSI) because it helps to identify levels at which the price might turn up or down from overbought or oversold regions.

Take for example the daily USD/CHF chart below: 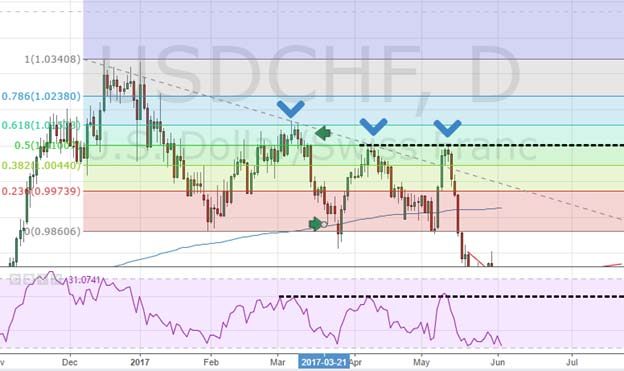 In this chart, we can see that the price rose to the 0.618 Fibonacci level, hitting at the same time an overbought point indicated by the RSI signal line touching 0.60. The price stalls at this level and starts to double back producing a sell signal.

The position is closed at the point at which RSI goes to oversold coinciding with the price dropping to the formidable 200 day moving average. It should be noted that following this trade, the price can be perceived as range bound with strength limited by the 0.50 Fibonacci level and weakness supported at the 0% Fibonacci level.

In summary, we can see that Fibonacci percentages are best used in combination with other technical indicators. In fact, most analysts would say that it is quite ineffective by itself. Fibonacci levels should never be seen as exact points to enter or exit positions and therefore other technical indicators must provide important context. Fibonacci levels on a chart should be viewed as approximate areas at which the market considers its next move and not as a clear cut mathematical marker.