This article has been born with the help of the Investija.com customers and visitors. Popularity of the candlesticks is huge, for that reason an amount of questions about it is understandably big. All the questions have a tendency to clarify which candlestick pattern works most. I decided to write an article about my understanding about candlestick charting and give my view about practical approach to candlestick charting.

Biggest mistake in the candlestick charting is to look for the single candlestick pattern and trade in that particular direction, without taking into the account the whole picture. Candlestick or it's pattern is just pattern, nothing else. There is no such thing as a signal or anything else. When white candlestick appears on the chart it means just one thing: there were more buyers than sellers for that particular period (1 hour, 4 hours, day and etc.) and possibility of the next candle to be white as well. I would like to draw your attention – I have used past time in the sentence and word possibility. It is very important to make it clear: candlestick describes the past period, not the present. About future it tells us just about probability, not certainty. So certainly when after the white candlestick, next candlestick is black, the above conditions remains for the black candlestick as well. There are no exceptions. Now, if we take difference not just in the colour, but main bodies of the two candlesticks as well, we have even more information: candlestick with the bigger body and shorter wicks, plays major role in the game. But lately if black candlestick's wick is to long towards up side, it could tells us another story. And at the end next candlestick can clarify situation completely or just opposite, can confuse even more. So, candlesticks just describing situation on the market and there are no signs of the future. By reading candlesticks we analyse the situation what has happened and what the next possible move can be. Due to the theory of the probabilities or our presumptions, we do expect one or another thing and take some actions. We are humans so predictable, that those actions will be nearly identical from time to time, so candlestick patterns took the place as a possibility of the reaction of the traders to the current situation. And it works. Because we all have fears, we all have an emotions. So those patterns appeared to be very useful to predict next move of the traders, but you all will agree with me on one thing: not always. In fact many times, those patterns are simply just wrong, or as we call it “failed signals”. So, where is the problem with those signals? Why sometimes it works, sometimes not? I will try to answer those questions and give some examples, comparing my support & resistance method to the candlestick trading.

Sokyu Honma “Sakata Constitution” or “Sakata's five methods” was created by the man named Sokyu Honma and after chart has been created, this method was successfully applied to the chart. “Sakata's five methods” has a “magic” number three. Three mountains, three rivers, three gaps, three parallel lines and three methods. About those methods traders can read in the book called “Japanese Chart of Charts” by Mr. Seiki Shimizu. I just would like to bring a attention to the same thing once more again: candlestick patterns have been used in the conjunction with the whole picture, not just single line or signal.

Now, let's take a look at the some examples. 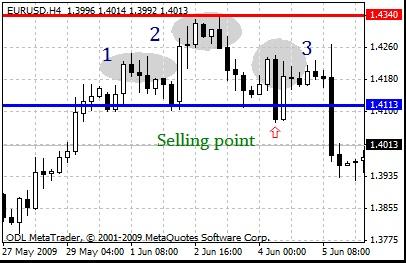 As we all know, already EURUSD making a big progress towards the sky and positive trend just unstoppable. But from the picture we see head & shoulders reversal pattern or in “Sakata's five methods” it would be called “Three Mountains”.

Let's read the chart. At the first number we met one negative candlestick and prices started to fall down a bit, but later positive trend was re-established by the few positive candlesticks, and at the number 2 appeared another few negative candlesticks. Yes, market declined again to the same point, but bounced back and just at number 3, where market sharply declined, started real selling. This third point was marked with bearish engulfing candlestick pattern and selling on the close price is recommended. Basically it matched with my method – support line has been broken, but I would place order to sell on the broken support line. My stop would be above the candle number three and here I loose money, because it was long wick up, washed out my stop loss and just later sharply declined. Trading by the candlesticks, you always wait for the candle to be completely drawn and just after that you take a decision. So in this situation, candlestick traders are the winners.

From the chart we see market for some time has been flat and there are three candlestick patterns. First one – evening star, second and third ones – bearish engulfing patterns. If we had sold on the first one, without waiting for market to develop into something (trend was positive), we would be lucky in this case, even market would have been testing our nervous system for few times, by trying to climb up. At the third point on the close of the bearish engulfing pattern, selling was much easier and as we later see became very successful. By my method, selling was just after price broke a support line, But was successful as well, even it was done later. Basically, candlestick charting won again over my method by few pips.

And one more example of the candlestick chart usefulness. 1 hour CADJPY. 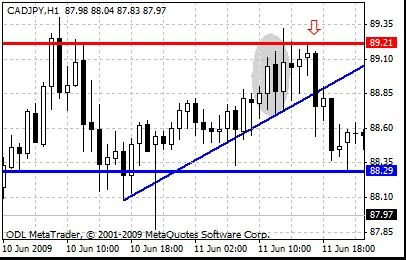 From the examples we can see if candlestick patterns are used with the whole picture, trading by them is very profitable, even time by time there are some losses. Trading by my method is profitable as well, but time after time loss appears on my screen. Probably does not exist 100% successful method, but trading with candlestick patterns brings positive results, if... If you are not trying to catch every single pattern, without looking at the whole picture. If you have patience to wait. If you read them correctly.

USD/JPY continues to trade in the negative territory around 109.00

USD/JPY is falling for the fourth straight day on Tuesday. 10-year US Treasury bond yield is down nearly 1%. Broad-based USD weakness doesn't allow USD/JPY to rebound.