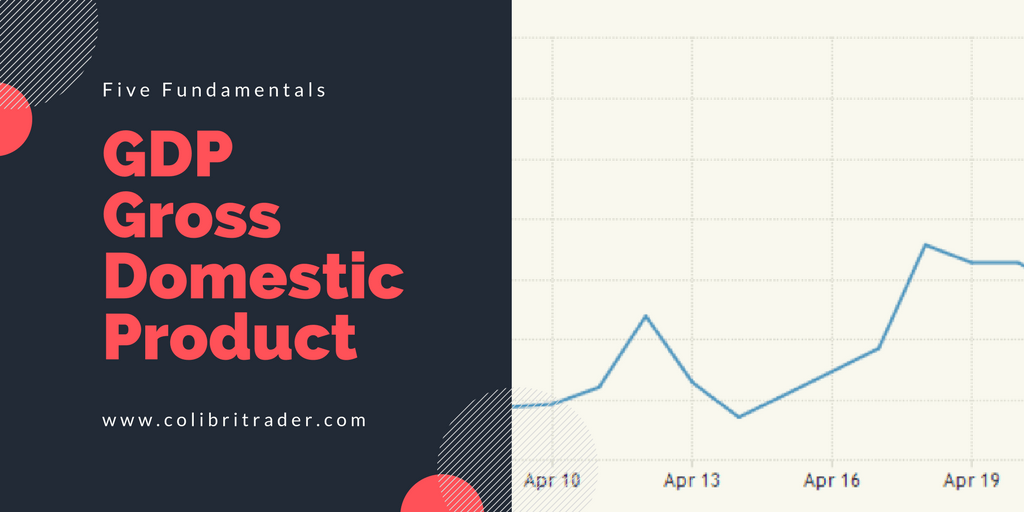 The GDP release remains the broadest and most comprehensive indicator available to assess a country's economic condition. The Gross Domestic Product represents the sum of the market value of all finished goods and services during a specific period of time (usually one year), produced inside a country, regardless of the ownership of the resources. For example, all cars produced by Ford in Germany, are included in the German GDP, while all cars produced by Mercedes-Benz in Mexico, are included in the Mexican GDP.

The U.S. GDP is reported quarterly by the Bureau of Economic Analysis, and contains data on personal income and consumption expenditures, corporate profits, national income and inflation.

Being a quarterly release, most of the movements in the GDP are already anticipated by the market. GDP, as the most comprehensive indicator, is usually forecasted by some other indicators and priced into the market. There are 3 versions of GDP released a month apart – Advance, Preliminary, and Final. The Advance release is the earliest and thus tends to have the most impact on the currency market.

2) The Release to Watch on First Friday – The Nonfarm Payroll 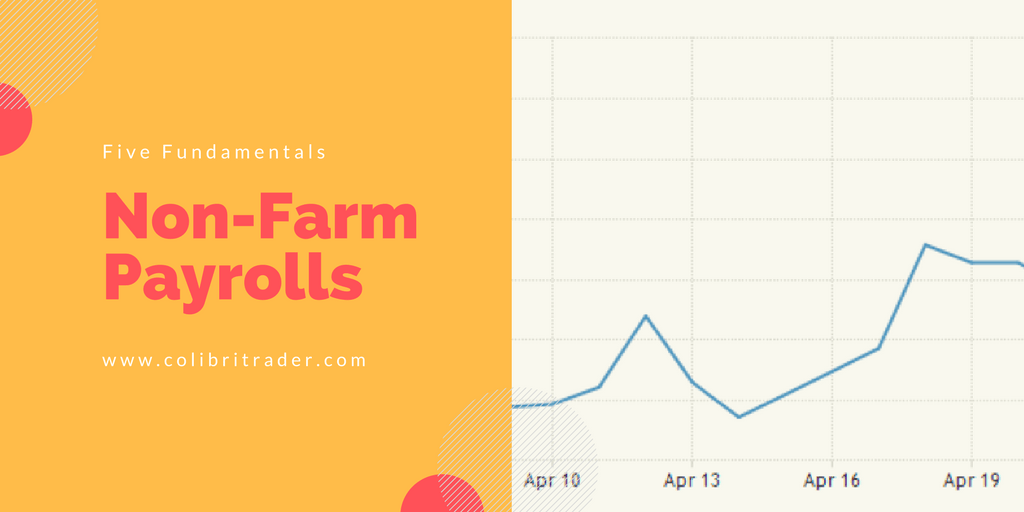 The NFP report is one of the most market-moving indicators related to the US dollar. It includes any job except farm work, military and intelligence, self-employment and employment by households. Job creation has a close tie with the future consumer spending, which makes the NFP a leading indicator of consumer spending.

The NFP is released monthly by the US Bureau of Labor Statistics, on the first Friday in the month. The most important headline is the change of the total nonfarm payrolls compared to the previous month.

The usual impact the NFP release has on the market is positive for the dollar if the actual release if above the forecasted, and negative if the actual release is below the forecasted. However, trading the NFP is not that simple, as other labour statistics are released simultaneously with the NFP. These are the average hourly earnings and the unemployment rate. Traders need to take care of all the released data to make a sound analysis. For example, a rising NFP combined with falling average hourly earnings can have a more negative effect on the dollar value than expected.

The retail sales is another release which traders should monitor closely. The US Deparment of Commerce releases the retail sales report, about two weeks after the record month, at 8:30 a.m. ET. The report presents the dollar value of sales for the retail sector, as well as the month-to-month change in that number, and is known for a volatile impact on the currency market. Retail sales have a big impact on the GDP, as personal consumption represents the largest contributor to the gross domestic product.

The retail sales are very difficult to predict, some analysts go out to shopping malls every weekend to get an idea of how strong or weak the custmers' spending is. Other count the number of cars and empty parking spaces in the shopping malls. These are all crude measures of the retail sales value. On April 14th, the retail sales report showed a –0.2% fall vs. 0.1% forecasted on a month to month basis. The EUR/USD made a long bullish candlestick in minutes after the release (USD fell in value).

The CPI tracks the change in price of a weighted basket with a few hundred goods and services. The basket represents a household's typical monthly purchase of goods and services, like food, energy, entertainment and others. The Bureau of Labor Statistics (BLS) calculates and reports on the consumer price index (CPI). The CPI is released around the middle of the month at 8:30 a.m. ET, for the previous record month. The release is often followed by an increase of volatility in the financial markets.

As the CPI report is unpredictable and creates a volatile trading environment, traders should try to use other types of analysis to predict the CPI. One strategy is to keep an eye on commodity and material prices. An increase in production inputs tend to influence price hikes on the final products. For example, a rising price of gas and oil will significantly increase the energy component of the CPI, especially during winter and the heating season. This is also known as cost-push inflation. Monitoring these values will give you a heads-up for the CPI release, and you can position yourself accordingly on the market. The CPI release on April 14th was -0.3% vs. 0.0% expected. This created a short-lived impact on the USD, which lost around 20 pips in 10 minutes against the euro. 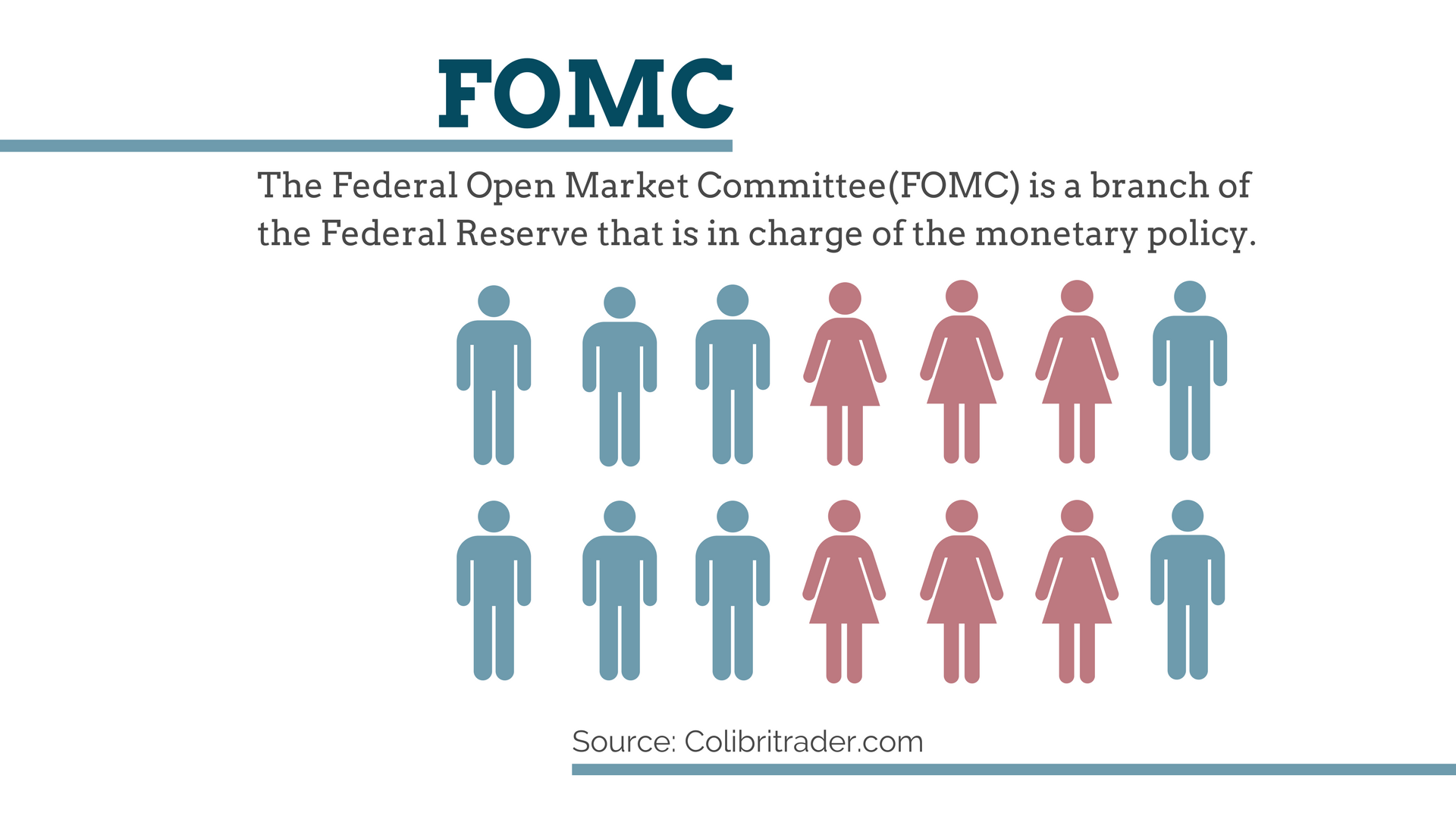 The Federal Open Market Committee (FOMC) is a branch of the Federal Reserve that is in charge of the monetary policy. The FOMC consists of the board of governors and Reserve Bank presidents. The role of the FOMC is to implement open market operations, which include the buying and selling of government securities, to impact the available money supply. For example, by selling government securities on the market, the FOMC decreases the available money supply in the market. This is also described as "tightening" the money supply. The FOMC operations have a direct impact on the interest rates.

With the important role of the FOMC, traders pay great attention to the FOMC meetings and their statements. The FOMC has eight scheduled meetings during a year, but can also meet more often if necessary.

The FOMC meetings are secret in character, and Wall Street and analysts try to predict what their outcome might be – will the FOMC tighten or loose the money supply, and thereby hike or lower the interest rate. As the outcome creates a big impact on the markets, the best bet is to stay away from trading during the meetings and wait for the market to settle down.