Bitcoin showed an impressive rally for over a thousand dollars last week. What's more, the altcoin market tried to rise from the dead. For a long time, there was no even hope for that. However, all the right things once ended. In our case, maybe it's just interrupting. At the beginning of the working week, Bitcoin lost almost 5% and traded around $8,650 on Monday morning. Investors considered the excess of $9K as enough level to take-profit. In the short term, it will be essential for Bitcoin not to decline below $8.5K and stay above the 200-day average. Altcoins also fall similar to bitcoin.

However, there was an important precedent: the buried by almost everyone asset class suddenly rose and showed at least speculative demand. Therefore, despite the impressive growth of the Bitcoin, it was still the altcoins that were the main event of the past week. Price of the Ethereum (ETH), the second most capitalized cryptocurrency, jumped 22%, while Bitcoin Cash (BCH) soared 48% and reached its maximum. The star of the Pump&Dump scheme, which strongly reminded market participants 2017, was the Bitcoin SV coin, spiked by 167% between January 13 and 15.

In a broader perspective, bitcoin-maximalists still believe that the "altcoin season" will be relatively short. Nevertheless, it will provide its holders with the opportunity to earn from significant spikes of volatility. 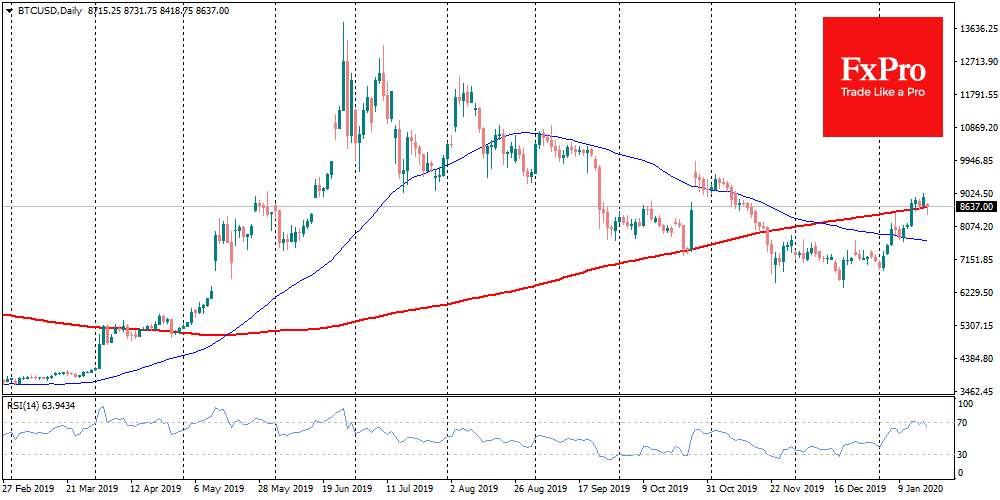 Still, the main star of 2020 should be bitcoin, where the $10K threshold may boost new wave due to internal factors (halving, institutional trading, real-world companies' collaboration), as well as external factors from the traditional financial market. Among the latest, we should name short sighted monetary policy that depreciates national currencies, geopolitics, populism, and the imminent approach of stock market correction. Cryptocurrencies could become a kind of the "second pole" in the world of financial flows if the infrastructure for investment continues to be improved. It should be understood that these digital assets will become much more "down-to-earth" and, as before, the market will always play against the mass sentiment.

The Seoul-based event has offered a welcome return to in-person interaction but failed to tackle the industry's most burning themes or challenge its panelists.  Bitcoin snaps its four-day rally; ether and other cryptos are lower.

Solana price is trading inside a symmetrical triangle with liquidity resting on either side of it. Although SOL came close to breaking out, it was rejected and pushed into two barriers, where it is likely to consolidate.