A Tokocrypto spokesperson would not confirm the deal, which has been widely reported by regional media. Binance is a Tokocrypto investor; bitcoin jumps back above $17K.

Insights: Tokocrypto would not confirm reports that Binance is acquiring the Indonesia exchange. In the interim, Tokocrypto token holders are seeing the token price rise.

BTC/ETH prices per CoinDesk Indices; gold is COMEX spot price. Prices as of about 4 p.m. ET

Bitcoin ignored concerns about inflation, a cratering economy and the latest crypto woes, rising 2.3% over the previous 24 hours after a late Thursday surge.

The largest cryptocurrency by market capitalization was recently trading above $17,230, its highest point since early Monday.

BTC subsequently struggled to clear the $17,000 support it has held for much of the previous 10 days as fearful investors returned to risk averse crouches. Crypto markets have been fearful of events within the industry and beyond that might send prices tumbling to lower levels.

"It's going to be a a bit slower growth pattern," JJ Kinahan, CEO of online trading firm IG North America told CoinDesk TV's First Mover program, although he added that he sensed "new money wanting to get into the market," saying that investors were "over" a "crisis of confidence."

Kinahan added that for the remainder of the year, he will be watching if investors return to crypto or "if people say, 'hey, I'm gonna regroup, wait til 2023 and reinvest at that time,' which is a behavior pattern we often see in other asset classes."

Ether was recently changing hands at just below its most recent $1,300 support, a more than 4.5% gain from Wednesday, same time. The second largest crypto in market value rose after Ethereum developers determined that the network’s next hard fork, called “Shanghai,” will have a target release time frame of March 2023. The March fork and a second one in the fall will give developers time to focus on technical issues and alleviate stress for individuals who have their ETH (and any accrued rewards) locked in the Beacon Chain staking smart contract.

Crypto news has been anything but straightforward this year, though. Earlier in the day, CoinDesk analyst Omkar Godbole wrote that an ETH bear market was likely to intensify after dipping below pivotal support. ETH fell 17% last month, breaching an ascending trend line connecting June and October lows. Later Thursday, CoinDesk also reported that shares of the world’s largest bitcoin fund, Grayscale Bitcoin Trust (GBTC), hit a record-high discount rate of nearly 50% relative to the price of bitcoin.

“The fact that Grayscale’s Bitcoin Trust is now trading at nearly 50% discount is just awful for holders of GBTC. It really highlights the vast differences in structure quality between different investment vehicles,” Bradley Duke, co-CEO at ETC Group, said in a note to CoinDesk.

Grayscale and CoinDesk are both subsidiaries of Digital Currency Group.

Most other major cryptos were recently in the green with MATIC, the token of layer 2 platform Polygon, up about 3.3% and popular meme coin DOGE climbing almost 3%. The CoinDesk Market Index (CDI), an index measuring cryptos' performance, jumped more than 2%.

Major equity indexes snapped a five-day losing streak with the tech heavy Nasdaq and S&P 500 increasing 1.1% and 0.8%, respectively despite recent macroeconomic uncertainties. On Friday, investors will be eyeing the University of Michigan's widely watched consumer sentiment index, which is expected to tick up a few fractions of a percentage point in its preliminary December reading compared to the previous month.

IG North America's Kinahan sees cryptos' recent sideways movement as a victory. "If you get through the end of the year going sideways, I would look at that more as building momentum," he said. "If you're long right now, you're saying to yourself, 'can we just stay in 1% to 3% of the levels we're at right now because that's building a base that will be longer-term confidence.'"

There are no losers in CoinDesk 20 today.

Media reports from Indonesia say that Binance is in the process of acquiring Tokocrypto, one of the country’s largest crypto exchanges – except this deal hasn’t yet been completed.

It's far from official. Despite the narrative that says otherwise, there’s no signed acquisition agreement.

When asked by CoinDesk Indonesia about the acquisition process, Rieka Handayani, Tokocrypto’s vice president of corporate communications, said the exchange doesn’t comment on “rumors and speculation that are circulating.”

There’s been one beneficiary of this preemptive announcement: token holders. According to CoinGecko data, Tokocrypto’s exchange token, TKO, jumped 97% after the first story was published, and is up 50% over the last week. 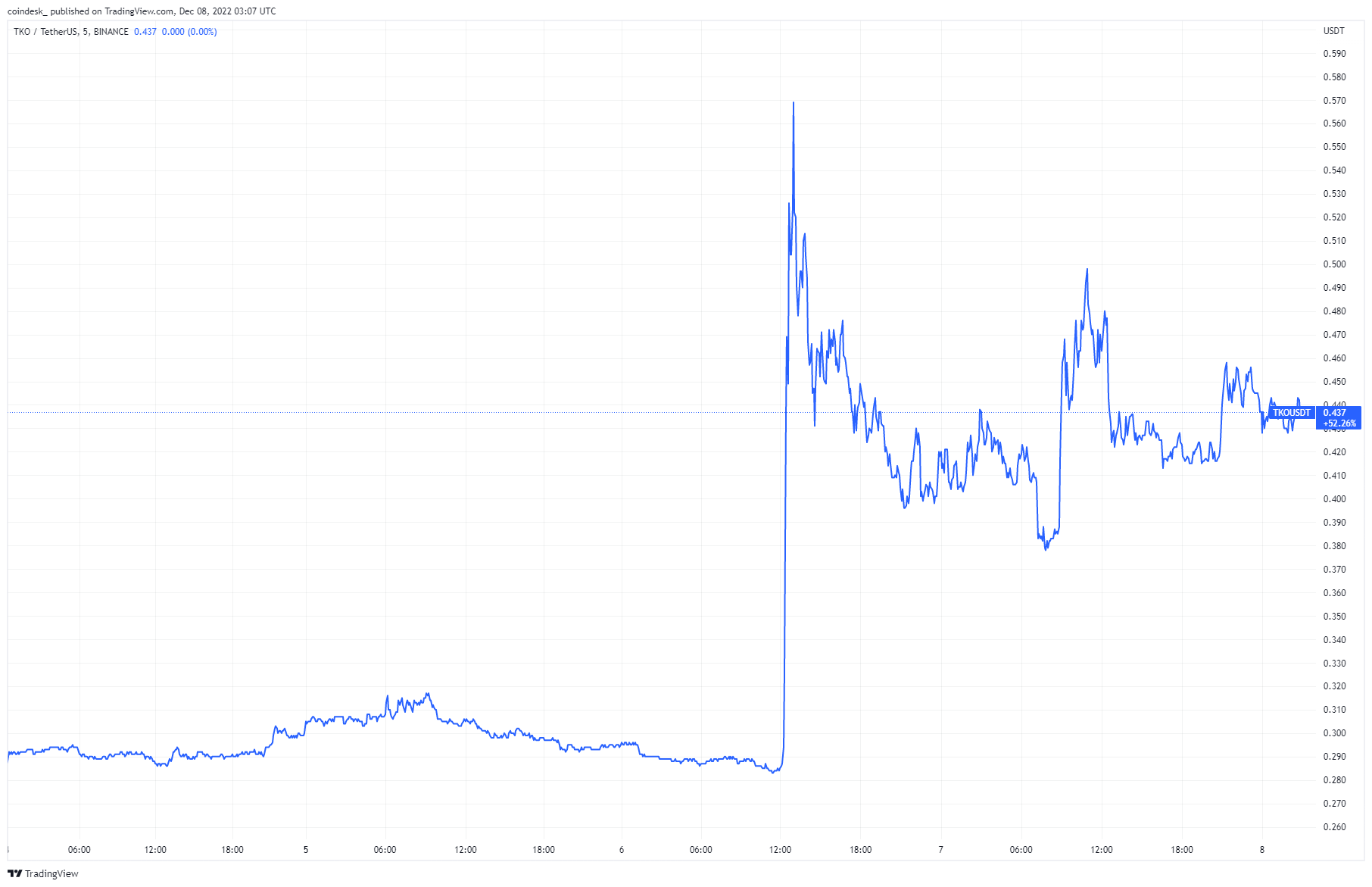 TKO’s trading volume has jumped from around $3 million pre-story to around $67 million as of Dec. 8.

Binance acquiring Tokocrypto would make a lot of sense. Indonesia has 16.3 million crypto users registered with its national know-your-customer system, and a population of 280.7 million. As of August 2020, the country reportedly has more crypto investors than stock market traders.

Meanwhile, Tokocrypto has had a rough crypto winter. In the past month, the exchange has laid off 20% of its employees and has begun separating out its business units, such as T-Hub (a crypto lounge community in Bali) and TokoMall (a non-fungible token marketplace), into separate entities and will likely spin them off to raise cash.

A Binance acquisition would be the perfect opportunity for the struggling exchange. It’s not that the deal will never happen; it’s just not official. Yet. But somebody has already made a tidy profit on the rumor.