A recent study by the London Block Exchange shows that the number of women that would potentially invest in cryptocurrency has doubled in the last six months. At the end of 2017 just 6% of women surveyed would consider investing, but as of June 2018, that number jumped to 12.5%. Among only Millennial women, that number was even higher at 20%.

At the same time, no substantial growth was seen among men. If the trend continues, cryptocurrency could become a gender-balanced industry by this time next year — a welcome change of pace from the notorious chauvinism of financial services sector. Historically, the industry has not been kind to women: aside from women being paid 40% less than their male counterparts (double the usual average of 20%), the financial sector reportedly hides a culture of rampant sexual harassment.

To be fair, though, women in cryptocurrency still have a way to go. Currently, the industry remains a male-dominated field, with 91.22% engagement by men against only 8.78% by women. 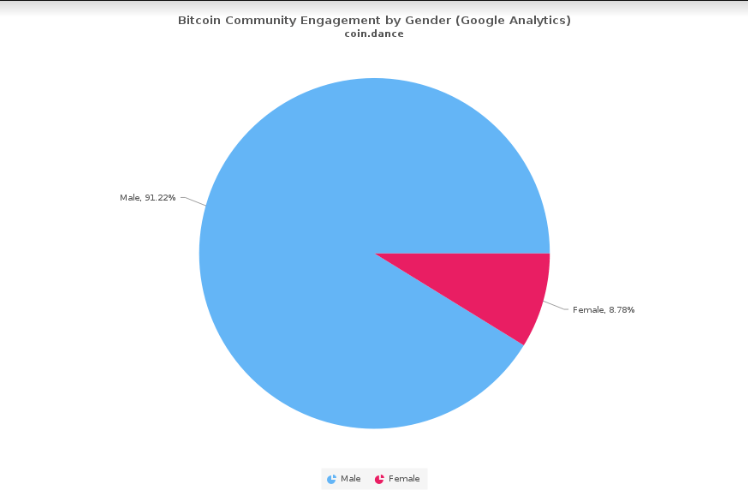 In fact, until recently cryptocurrency has been severely criticized for its lack of women, which makes LBE’s new study arrive at a good time. However, researchers are optimistic that the floodgates have opened, and women are now ready to dismantle the “Blockchain Bros” mentality. Nydia Zhang, co-founder and chairwoman of the Social Alpha Foundation, is “confident that the number of female leaders in crypto will double in the next six months,” creating a sizeable presence at the start of 2019.

There are already women in cryptocurrency?

Despite women making up only a minority of participants, there are still plenty of female role models within the cryptocurrency world. Traditionally a fashion magazine, Glamour broke form to profile nine prominent women leaders in cryptocurrency. Among their list are Elizabeth Rossiello, founder of BitPesa; Elizabeth Stark, CEO of Lightning Labs; and Connie Gallippi, the founder of the nonprofit Bitcoin charity The BitGive Foundation. (Also listed was Kathleen Breitman, co-founder and CEO of Tezos, although recent bad press has undermined her position.)

A female presence in cryptocurrency makes sense, considering it circumvents one of the common obstacles for women in any business: raising money. Over the last few years, women-founded companies have only received roughly 2% of the total venture capitalist funding. Except for a spike in 2014, that percentage shrinks the farther you go back. Cryptocurrency, however, lets female entrepreneurs appeal to the public rather than a small group of investors. ICOs level the playing field a bit and remove some of the investor gender bias, setting the stage for an industry more welcoming of women than others.

BTC/USD bears took the price down from $9,236.20 to $9,228.26. The daily confluence detector shows a lack of healthy support levels on the downside. On the upside, there is one strong resistance level at $9,280.

ADA/USD continues to trend in a narrow $0.011–range

ADA/USD bears took charge of the market following two bullish days and took the price down from $0.1273 to $0.1243. Initially, the bulls managed to take the price up to $0.136, before the bears took charge. The MACD shows decreasing bullish momentum, while the RSI is trending along the edge of the overbought zone.

Ethereum Price Prediction: For how long will ETH/USD stay in consolidation?

Ethereum, just like Bitcoin is in a lull with the price pivotal at $240 for a few days now. The motionless trading is taking place despite activities in the Ethereum network skyrocketing. For instance, last week the (DeFi) ...

LINK/USD is in good shape as long as it stays above $7.00

Chainlink (LINK) hit $8.53 on Monday, which is the highest level on record, and retreated to $7.24 by the time of writing. The coin has lost over 6% in the recent 24 hours and slipped to the eleventh place in the global cryptocurrency market rating.