Ethereum price is making subtle upside corrections with a rise of 0.37% on Wednesday 4. ETH/USD has also maintained trading within the confines of an ascending channel after the bullish trend that re-ignited on June 29. The price surged past the resistance at $440 and settled a short-term bullish flag pattern supported at $450 before resuming the bullish trend that breached the next resistance target at $480.

Ethereum traded marginally above $480 although briefly before seeking balance from the overbought levels and supported at the 50% Fibonacci retracement level with the last high leg at $542.94 and a low of $408 at $460.It is also supported by the lower bullish trendline at this same level. Ethereum price is currently trading at $465 while technical indicators like the stochastic RSI is above 80% and still sending bullish signals for the short-term.

The moving average gap is also beginning to narrow to show that the buyers are gaining control but will have to deal with the resistance at $470 and $480 respectively before gaining momentum to attack $500 in the medium-term. As mentioned in the second paragraph ETH/USD is supported by the 50% Fibo and the 100 SMA at $460.The 50 SMA will also stop declines at $450 but the demand zone on the downside is still at $410. Ethereum must keep above $460 in the medium-term to allow the buyers to gather momentum and push for higher corrections. 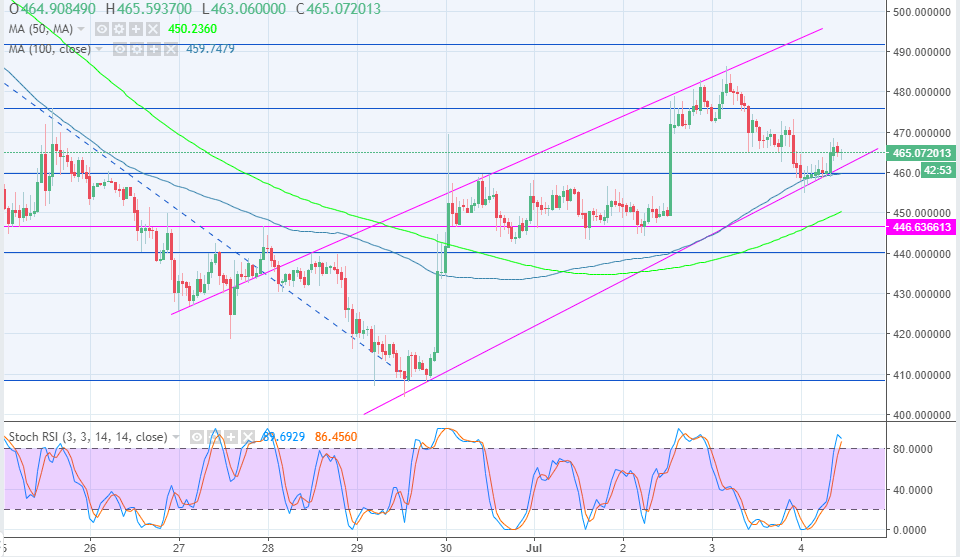