Sending money home can be an expensive business. But it doesn't have to be. Digital currencies offer the possibility of lower fees, giving rise to more frequent and cheaper transactions. This has implications for the FX world, particularly the dollar.

Shortly after Facebook announced the development of its own digital currency, Libra, policymakers around the world were quick to point out the potential pitfalls and risks of launching such a project on a global scale. Their immediate concerns relate to the disintermediation of the traditional banking system and the potential loss of monetary sovereignty. However, one unintended consequence is that it has greatly accelerated the debate on the development of digital currencies, including the possibility that central banks could launch their first pilot of Central Bank Digital Currency (CBDC) within the next five years. Is there an immediate link between digital currencies and markets and how could that play out?

Remittances could be an immediate use case for digital currencies

The global remittances market reached $689 billion in 2018 and will grow beyond $700 billion by the end of this year, according to World Bank estimates. The market is growing at an exceptional rate: if we exclude China, remittances now outpace foreign direct investment (FDI) flows. Moreover, the global average cost of sending remittances currently stands around 6.84%, which is relatively high. The rise of digital currencies could push transaction fees lower and give rise to more frequent and cheaper transactions. 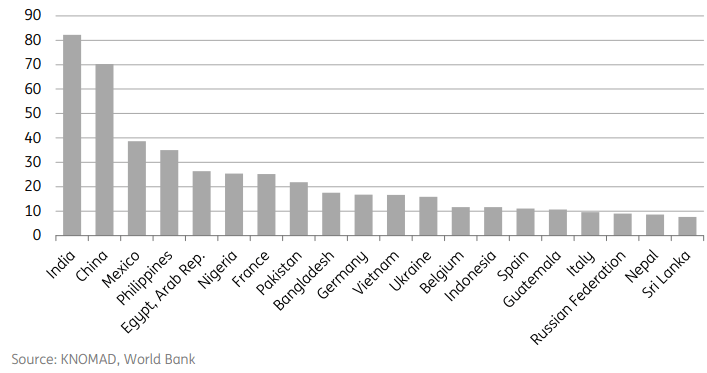 The end of dollarisation?

So what does this mean for the currency market? Let’s take a look at Ukraine, which is a highly dollarised economy. The World Bank estimates that Ukrainian workers will send some $16 billion (11.8% of Ukraine’s GDP) back to their home country this year. Moreover, the total average cost for sending $200 of remittances from the US to Ukraine stands at around $9.90 (or 4.95%). This includes both the transaction fee and the exchange rate margin cost. The launch of either a private or a publicly-issued digital currency (e.g. the National Bank of Ukraine conducted an e-hryvnia pilot this year already) could compress both costs, which would offer Ukrainians another (digital) channel to send their remittances back to their home country. And if digital currencies are accepted by retailers at point-of-sale and on e-commerce platforms, this could in theory diminish dollar demand. To be sure, regulatory and policy challenges are unlikely to disappear but markets should start thinking about these issues and their immediate implications.

Bitcoin Cash is wrecked after dropping like dead weight in the air. The entire crypto market is in bloodshed as volatility returns. BCH/USD has corrected lower by 3% on the day.

Ethereum (ETH) experienced a sharp sell-off to the intraday low of $229.78 and recovered to $230.80 by press time. The coin has entered a recovery mode; however it is still vulnerable to a new shell-off below $230.00 as the bearish pressure remains strong.