According to Chainalysis, the downfall of FTX is likely to have a relatively smaller effect on the crypto ecosystem than the demise of Mt. Gox.

Blockchain analysis firm Chainalysis has compared the fall of Mt. Gox to FTX to determine how FTX’s bankruptcy will impact the ecosystem.

It concluded that FTX was a relatively smaller part of the crypto industry than Mt. Gox was at the time and that the industry should bounce back stronger than ever.

In a Nov. 23 Twitter thread, Chainalysis’ research lead Eric Jardine began his comparison by first looking at the market share of the two firms, finding that Mt. Gox averaged 46% of all exchange inflows in the year leading up to its collapse in 2014, compared to FTX’s average of 13%, which operated from 2019 to 2022.

Exchange inflows of CEXes compared to DEXes between 2013 to 2022. Source: Chainalysis

Jardine mentions, however, that FTX was slowly gaining in market share while Mt. Gox was seeing theirs steadily decline, and that business trajectories are worth considering, adding:

Mt. Gox was becoming one exchange among many during a period of growth for the category, taking a smaller share of a bigger pie. FTX on the other hand was taking a bigger share of a shrinking pie, beating out other exchanges even as its raw tx volume declined.

Despite this, Jardine concluded that Mt. Gox was a “linchpin of the CEX category at a time when CEXes dominated,” making it a bigger part of the crypto ecosystem at the time of its collapse than FTX was.

Jardine then goes on to examine the recovery of the crypto industry after the fall of Mt. Gox and found that while on-chain transaction volume was stagnant for a year or so, activity soon picked back up.

Customers who had holdings deposited on the exchange have still not received their funds back, but the Mt. Gox Trustee announced on Oct. 6 that creditors have until Jan. 10, 2023, to select a repayment method for the 150,000 BTC reportedly in their possession. 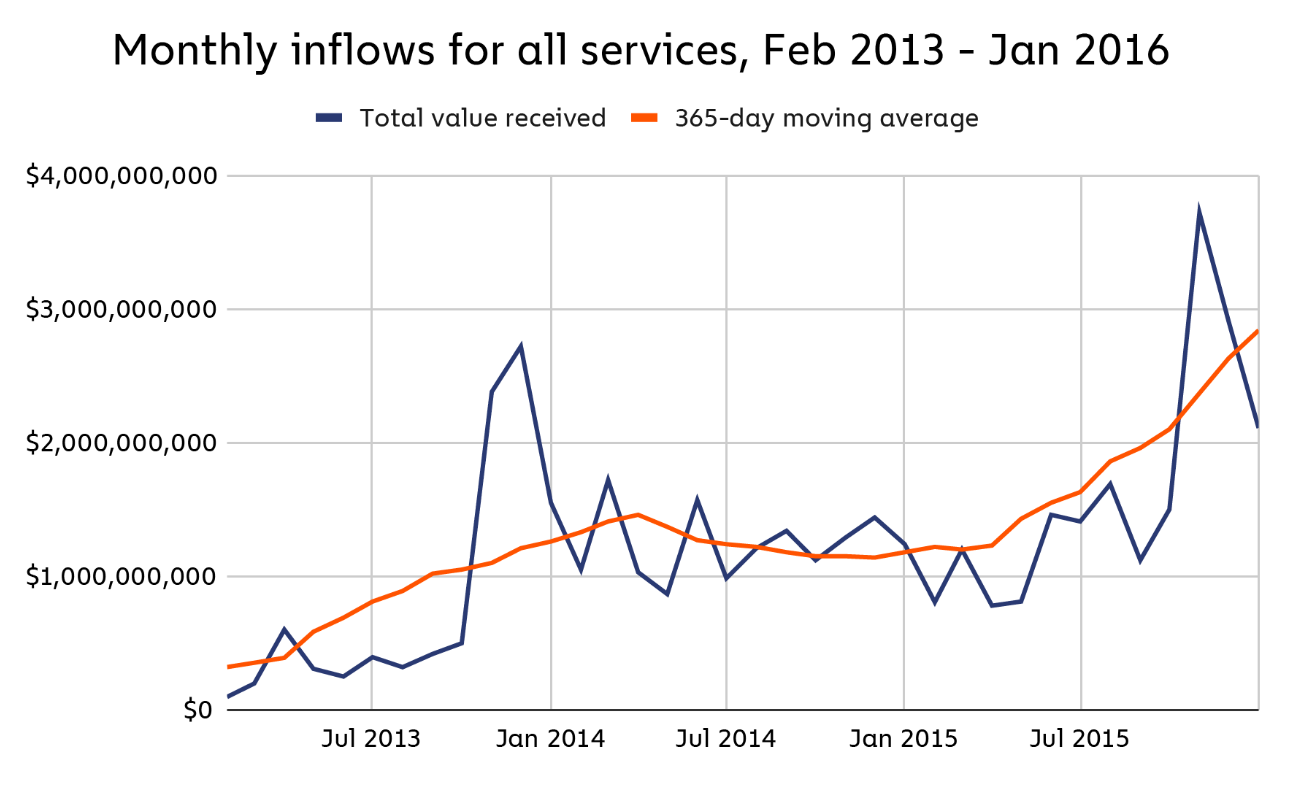 Monthly service inflows for crypto before and after Mt. Gox collapsed. Source: Chainalysis

Jardine believes that although there are other factors such as Sam Bankman-Fried’s large public presence, the “comparison should give the industry optimism,” as when it’s boiled down to market fundamentals, “There’s no reason to think the industry can’t bounce back from this, stronger than ever.”