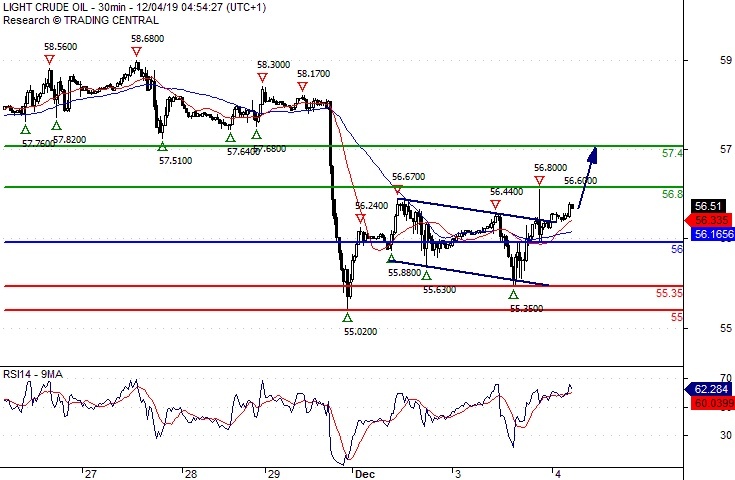 WTI (oil futures on NYMEX) caught a fresh bid wave last minutes and broke the Asian consolidative mode in Europe, as the bulls look to regain the 57 handle amid improved market mood.

The risk sentiment witnessed a major turnaround on the latest Bloomberg report that triggered a fresh risk-on wave across the financial markets in Europe. Bloomberg cited people familiar with the trade talks, as saying that the US and China are moving closer to a trade deal despite the escalating tensions over the Hong Kong and Xinjiang bills.

The buying interest around the black gold gathered steam alongside other risk assets such as the equities, Treasury yields and Wall Street futures. At the time of writing, WTI is up +1.20% near 56.80 region, having jumped to three-day tops of 56.91 on the trade headlines.

The barrel of WTI also continues to derive support from a drop in the US crude stockpiles, as reported by the American Petroleum Institute (API) late Tuesday. The API data showed that the US crude inventories fell by 3.7 million barrels, more than double expectations of a decline of 1.7 million barrels. Read more...

Why is the market falling today?

The trading week is coming to an end, and the crypto market leaders seem to be inviting people to go on holiday and come back in a few weeks to see if anything has happened by chance. The current low volatility is never comfortable for the active trader, aware that today's extreme calm is the prelude to an explosion of instability in the future.

XTZ/USD recovers from a sudden drop below $3

Tezos is still trading inside a massive daily uptrend and is not facing a lot of resistance until $4. The current daily candlestick is a bullish one, especially if the buyers can hold Tezos price above $3.24.