Bitcoin (BTC) is at the start of another week with China’s latest “ban” behind it — but its next “FUD” story is already brewing.

The United States’ infrastructure bill is back on the table, with this week likely to see a definitive vote on what could shake up cryptocurrency businesses.

At the same time, fundamentals and on-chain metrics alike continue to be more bullish than ever, and traders are betting on — at worst — a moderate price dip to a floor no lower than $36,000.

What are the odds? Cointelegraph takes a look at five things that could move the markets in the coming week.

The macro narrative switches from China to the United States this week as lawmakers decide the fate of the so-called “infrastructure bill.”

H.R.3684, fresh from Senate approval, should see a final vote on Monday — despite rumors that it may yet be delayed.

The bill includes a contentious description of a “broker,” one which could have far-reaching implications for U.S. crypto businesses. Efforts are still underway to change its language, with figures such as Wyoming Senator Cynthia Lummis and advocate Caitlin Long leading the way.

The current text describes a broker as “any person who (for consideration) is responsible for regularly providing any service effectuating transfers of digital assets on behalf of another person.”

While potentially a thorn in the side of the local crypto industry, H.R.3684 arguably matters little to seasoned Bitcoin hodlers.

Nonetheless, on the back of the latest China “ban” debacle, market sentiment is sensitive to “FUD” stories from any quarter.

“Bitcoin is bipartisan. Digital assets are apolitical,” Senator Lummis summarized on Twitter ahead of voting day.

It’s a familiar tale for BTC spot price action this Monday as BTC/USD returns to $44,400.

That heralds the start of a resistance level, which ultimately sparked rejection last week after the pair briefly passed $45,000.

So far, this attempt to break out has not been much different, with $44,000 failing to hold at the time of publishing.

Nonetheless, compared to forecasts of a return to the mid-$30,000 range coming as late as Sunday, the latest progress is refreshing. 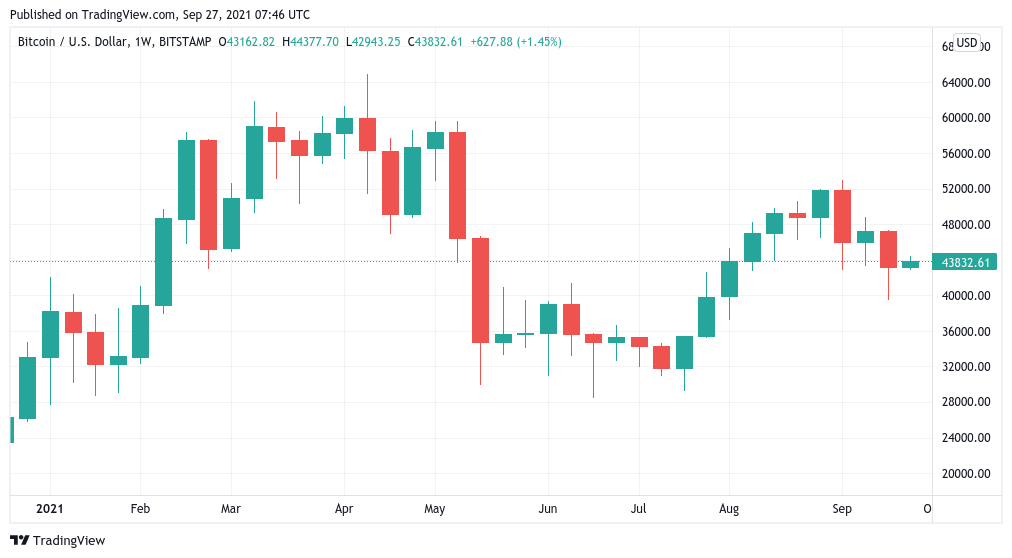 The weekly close, a source of contention in recent days, didn’t disappoint, coming in at $43,144 — above the minimum cut-off points that some traders highlighted.

Trader and analyst Rekt Capital had demanded a $43,600 closing price, something which failed to materialize on time but came hours later.

“BTC continues to be sandwiched by the Pi Cycle 111-day MA support and this immediate red resistance area,” he added in further comments. 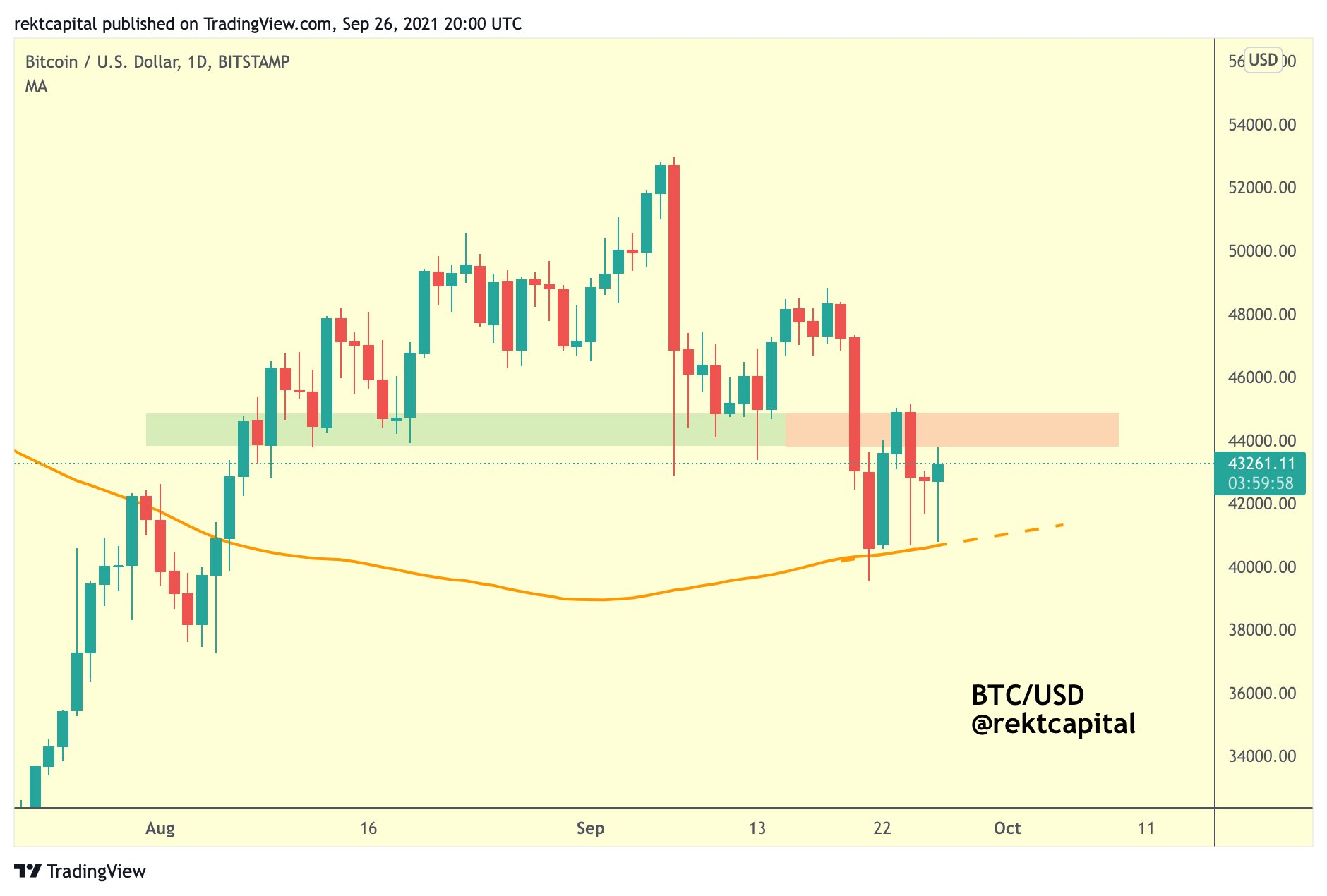 It’s all smiles for Bitcoin network fundamentals for yet another week running as estimates call for a sixth consecutive difficulty increase.

Following last week’s fifth increase in a row — a rare feat in itself — data suggests that in eight days’ time, Bitcoin will seal a further upward difficulty readjustment. That would be its first six straight increases since mid-2019’s seven.

It’s not just difficulty — the hash rate is now at around 145 exahashes per second (EH/s) and just 23 EH/s away from all-time highs.

The stats are testament to the conviction of miners, as well as to the extent of their comeback since China’s mass exodus just four months ago.

On the consumer side, the story is no less impressive. The Lightning Network, fresh from its El Salvador adoption success story, is nearing 3,000 BTC capacity. Since the start of 2021, that capacity has nearly trebled.

Late last week, the Index, which takes a basket of factors to determine sentiment, dipped to its lowest levels since mid-July — before BTC/USD began its run to $53,000.

As of Monday, the Index is slightly higher at 27/100 — still firmly within the “fear” zone.

As analysts often note, just when everyone is leaning bearish provides an ideal moment to long BTC and trip up the majority of speculators.

“Never gonna give you up…”

Those words, and other excerpts from English singer Rick Astley’s 1987 song of the same name, have become a meme for Bitcoiners.

They describe the mindset — and investment habits — of hodlers who never sell their BTC, no matter the circumstances.

Hodling through any storm is a galvanizing force among long-time market participants, but right now, the “Rick Astley” investor may even be pointing the way to new all-time highs. 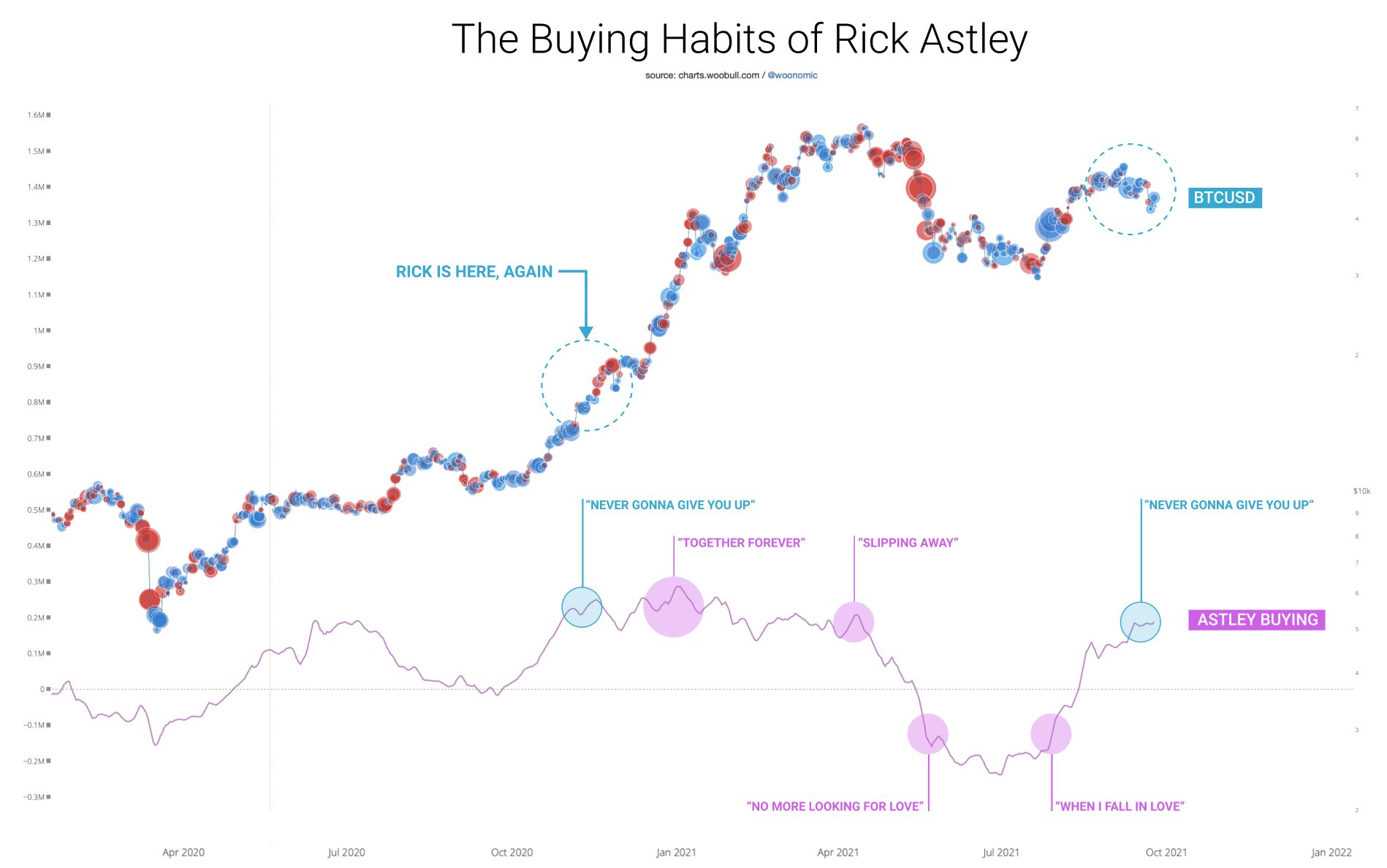 As noted by analyst Willy Woo, those Rick Astleys have hodled long and hard, and historically, the good times are now set to roll.

“Bitcoin has entered the Never Gonna Give You Up phase of the Astley Cycle,” he argued alongside an amusing chart comparing Rick Astley buying habits to BTC price action.

The effects may yet come sooner than many imagine. Against a sudden $2,000 uptick on Sunday, van de Poppe called time to “party” across Bitcoin and altcoins.

More broadly, strong hands have taken control of an increasing segment of the BTC supply, Cointelegraph reported, with this figure reaching its highest since October 2020 this month.

Ethereum has posted better than 900% gains over the past year, offering traders and holders a high risk-adjusted return compared to other altcoins. Ethereum’s historical price action has paved the way for a run to $19,000.

The launch of ProShares Bitcoin ETF has analysts predicting a target of $250,000 for the end of the cycle. Crypto traders have waited a long time to launch the Bitcoin futures ETF, and the upcoming rollout has triggered a rally in BTC price.

MATIC price is traversing an ascending triangle pattern and is edging closer to a breakout. A decisive close above the $1.71 resistance level will confirm the start of an uptrend.

The United States Securities & Exchange Commission’s (SEC) lawsuit against Ripple and XRP has moved from something that was supposed to be quick to a battle of attrition.