Bitcoin has settled $712 billion already in 2020, while stablecoins have already seen their biggest year ever.

Cryptocurrency public blockchains will settle more in 2020 than ever before and have already topped $1.3 trillion, data shows.

Compiled by analytics firm Messari on July 21, the figures reveal that Bitcoin (BTC) has settled $712 billion so far this year, while Ether (ETH) is on $147 billion.

Messari: Blockchains have not “failed” as payment systems

The Ethereum network, which supports stablecoins including market cap leader Tether (USDT), has added another $423 billion to the total. Growth in combined stablecoin transaction value is conspicuous, with the first seven months of 2020 topping last year’s total of $337 billion and 2018’s $146 billion.

For Messari, the overall record for settlement is a firm rejection of the concept that cryptocurrencies cannot compete with legacy systems as a means of payment.

“Many people think blockchains have failed as payment systems. The typical argument goes something like, ‘you can’t buy a cup of coffee with Bitcoin, therefore it has failed as a payment system,’” it summarized.

“Along this line of argument cryptocurrencies like Bitcoin and Ether also suffer from extreme volatility making them unable to serve as payments mediums. Both premises aren’t entirely inaccurate, but the conclusion definitely is. In fact it is about $1.3 trillion wrong.” 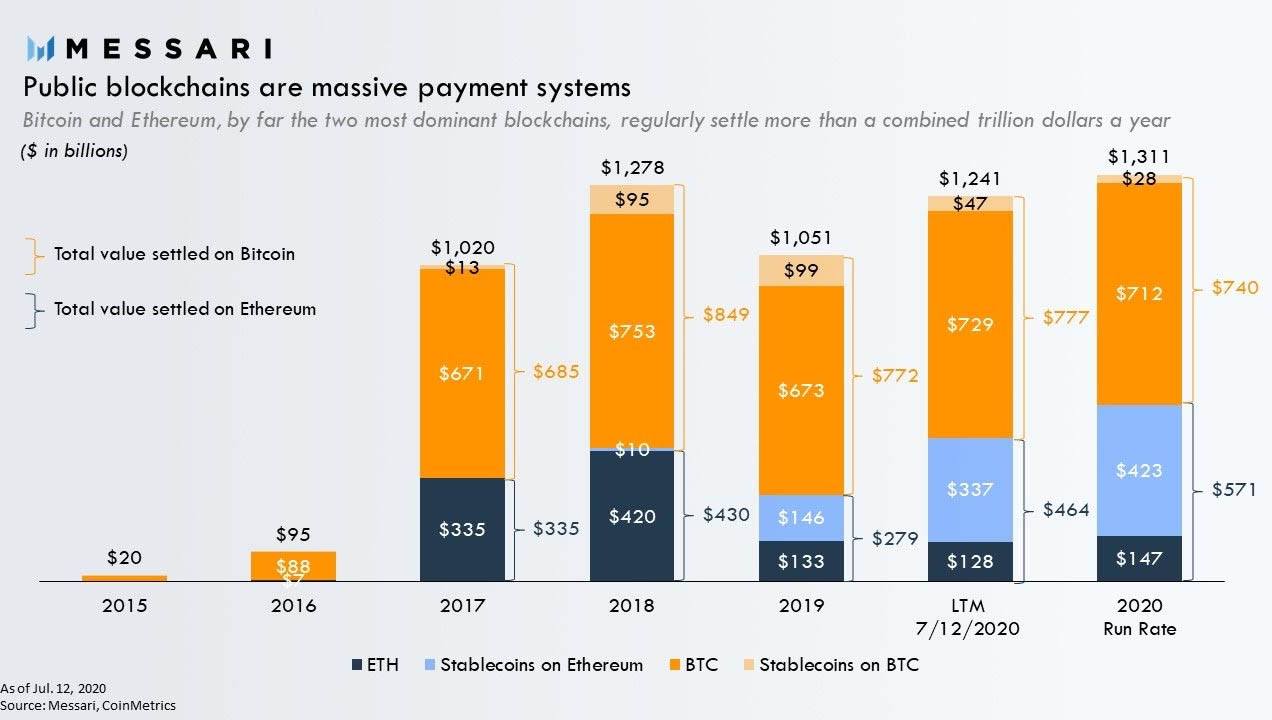 Continuing, researcher Ryan Watkins argued that it was unsuitable comparing blockchains to payment networks such as Visa.

A better comparison would be the umbrella settlement systems of the fiat realm, such as Fedwire.

“The purpose of these systems is to fully guarantee payments so that they cannot be repudiated, reversed, or charged back without agreement of the recipient, and they’re meant to settle immediately,” he wrote on Twitter.

Cryptocurrency consumer payments are still firmly within the discovery phase. Many mainstream options represent a “bridge” to fiat, such as cryptocurrency debit cards.

These, and anything else which is dependent on the fiat economy, are also subject to disruption due to centralized control of the underlying infrastructure.

Decentralized cryptocurrencies, and specifically Bitcoin, are designed to make it impossible for a third party to control network activity.