The run-up in bitcoin (BTC, -3.9%)‘s price witnessed during the final days of July is facing pressure from sellers looking to cash in their profit amid tensions over a proposed U.S. infrastructure bill’s language.

The pullback from Saturday’s top of around $42,400 to current prices of around $39,500 is likely associated with uncertainty surrounding the bill, according to Daniel Kim, head of capital markets at Australia-based decentralized lending company Maple Finance.

An earlier version of the bill sought to increase information reporting requirements and a broadening of the definition of a “broker” for any parties that might interact with crypto, including decentralized exchanges.

Subscribe to First Mover, our daily newsletter about markets.

“This ultimately created a lot of fear, uncertainty, and doubt with users moving funds off platforms, reducing liquidity, and uncertainty of price with this impact,” Kim said in relation to the bill’s proposal on Thursday.

Crypto exchange FTX’s bitcoin reserve almost doubled in July while Binance’s reserve dropped by 70,000, and this has left a lot of uncertainty in the market, Kim added.

Bitcoin had been mounting a significant push toward resistances near $42,000 and cemented a 10-day winning streak, the crypto’s longest in eight years, on Sunday.

The rally came to an end later in the evening and has fallen 5.5% over the last 24 hours, CoinDesk data show. 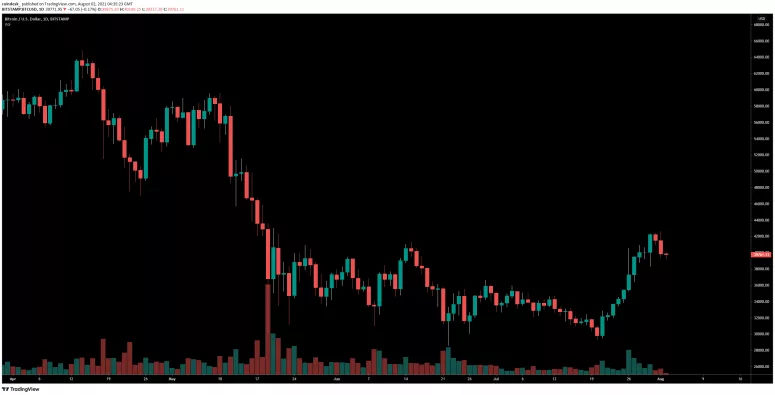 The bill, which is being debated in the Senate, seeks to bolster tax receipts in order to fund the more than $1 trillion in infrastructure improvements across the country, $28 billion of which would come by way of crypto transactions.

Criticism over the bill’s definitions as it relates to the crypto community has been vocal with some suggesting the bill is too broad and could apply to most economic activity in the U.S. crypto industry.

An updated version of the Senate’s bipartisan infrastructure bill, revealed Sunday evening, seeks to narrow the definition of “broker” to people who provide digital asset transfers.

The bill’s revised language does not explicitly include decentralized exchanges, nor does it explicitly exclude miners, node operators, software developers, or similar parties.

The options market, however, is painting a somewhat different picture. Bitcoin has been rallying into “the largest open interest strike” of the July expiry, Coinbase announced in a newsletter.

Other notable cryptos in the top 20 by market capitalization also fell with XRP (-1.28%), link, and theta shedding the largest amount, between 5-7% over a 24-hour period.