Bitcoin price led the brief bullish momentum in the market yesterday where it gained more than $200 in less than 1 hour. Bitcoin used $7,120 as a support while the bulls were eyeing $7,600. At the moment, BTC/USD is trading a bullish flag pattern pending another upside breakout.

It is still unclear what caused the sudden upsurge in Bitcoin on Tuesday 29, however, one of FXSTREET writers, Yohay Elam believes that there is a connection between the political discord in Italy. ‘Italexit’ might have been the boost that took Bitcoin from trading $7,120 to above $7,500. The elections in March resulted in an economic crisis in the country. Italy’s stock prices have plummeted almost similar to the Brexit situation in Great Britain. The money flowing out of Italy’s bonds, the Euro as well as the global stocks could have ended up in the crypto market. Elam Yohay wrote referring to the crisis in Italy, “When the establishment is in crisis, alternatives are sought after.”

However, at the time of writing, Bitcoin price is supported at $7,500. There is a bullish trend in progress which could test $7,600 again. There are a couple of other support areas at $7,440 and $7,400 respectively. The MACD is slightly in the positive region, moreover the Stochastic is above the 70 mark showing that the bulls still have the momentum to push for higher corrections. 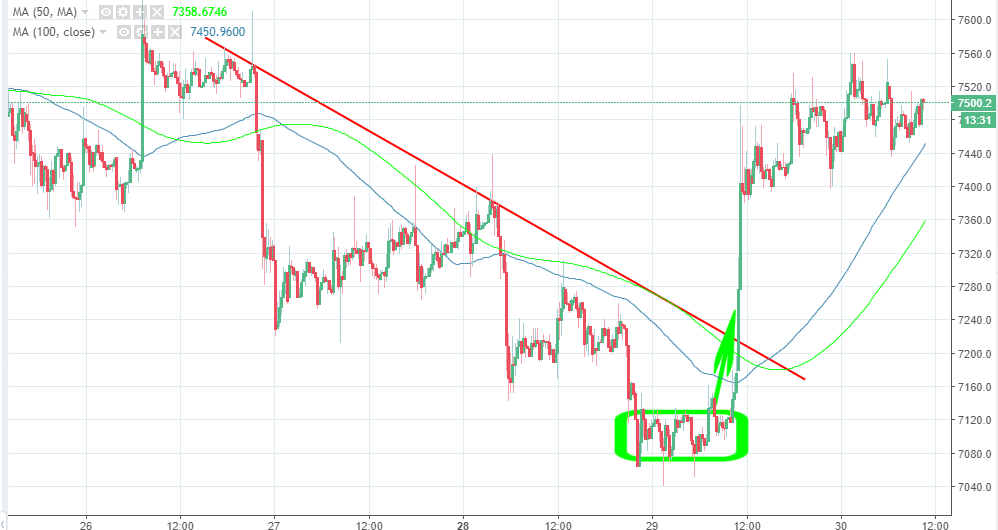