Bitcoin is trading with a heavy tone amid signs of excess leverage and greed in the market.

A pullback was overdue, and more downside volatility could be in the offing, according to analysts. “Estimated leverage ratio is about to hit a year-high. It seems obvious that the market is over-leveraged now,” Ki-Young Ju, CEO of data analytics firm CryptoQuant said. “We’ll see some volatility with huge liquidations shortly.”

The estimated leverage ratio is calculated by dividing futures open interest across all exchanges by bitcoin reserves on exchanges. Open interest refers to the number of contracts traded but not squared off with an offsetting position.

The ratio essentially shows the degree of leverage of an average investor. While a rising ratio indicates increased risk appetite, a very high number reflects excess leverage buildup and has marked price tops early this year. 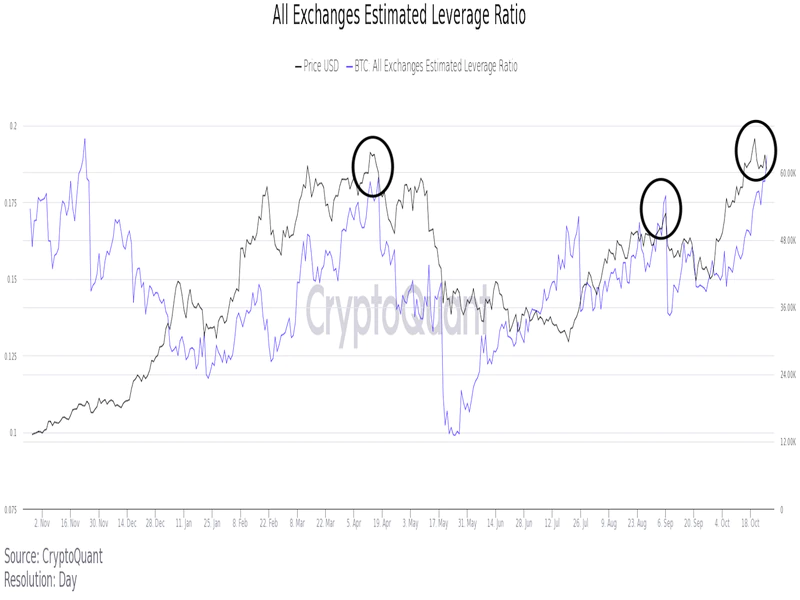 The leverage ratio currently stands at 0.19, the highest since November 2020.

“Dog coins are mooning again, which has historically been a pretty good indication of an overheated market,” analysts at Delphi Digital said in a market note published on Oct. 25. “The first time dog coins went wild was Apr. – May this year, and quickly cratered as crypto markets cooled off. In early Sept., dog coins were all the rage again and the broader crypto market saw a fairly deep de-leveraging.”

SHIB clocked a record high of $0.0000595 during the Asian hours, taking the month-to-date gain to over 600%, Messari data shows. The token has gained 48% this week, courtesy of the SHIB army’s frenzied campaign to get the online brokerage platform Robinhood Markets to add the coin to its platform. Early today, #shibainu was the top Twitter trend in India, the world’s second-most populous country. A spokesperson from Mumbai-based WazirX, one of the largest crypto exchanges in India, said SHIB has overtaken bitcoin’s position as the top traded token in the Indian rupee market this week, generating a volume of $489 million.

A surge in activity in a highly risky coin like SHIB indicates speculative fervor may be reaching a tipping point. “The Crypto Fear and Greed Index is back to highs we haven’t seen since early March, officially marking “Extreme Greed” levels,” Delphi Digital said in Tuesday’s market update.

Moreover, the optimism generated by the recent launch of futures-based bitcoin exchange-traded funds and the bullish mood seems to have waned. The cryptocurrency widely touted as digital gold failed to pick up a bid during the Asian hours even though Australia reported core inflation at a six-year high. According to JPMorgan, rising inflation expectations played a big role in pushing bitcoin to new record highs earlier this month.

Bitcoin’s technical picture now supports the case for a deeper pullback. The drop below support at $59,800 has confirmed a head-and-shoulders bearish reversal pattern, exposing support near $54,000. 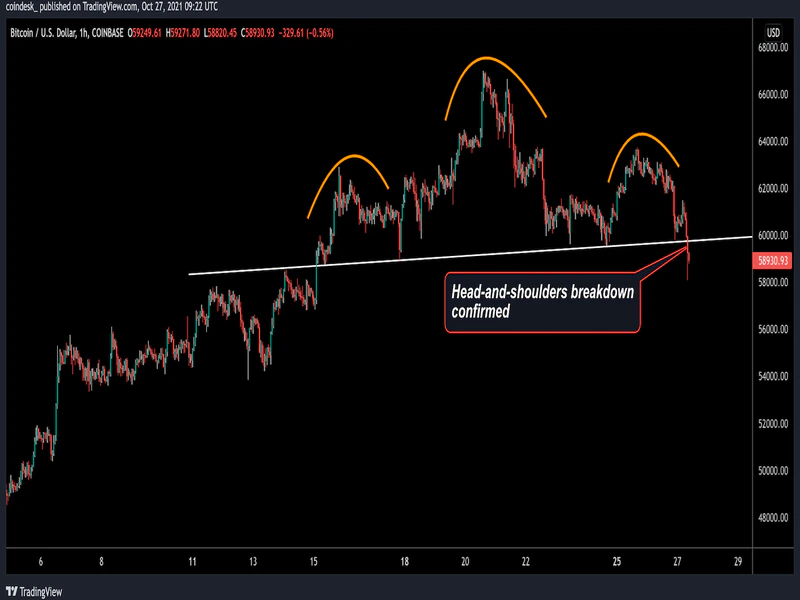 The sell-off may be much more severe if traditional markets wilt due to rising odds of faster scaling back of stimulus by the Federal Reserve.