Bitcoin (BTC) is at a crossroads as it starts a new week — hovering around $40,000 but with serious headwinds keeping it from bouncing higher.

A reversal and consolidation were broadly expected — the pace of gains over the past week has rattled an investor base that until recently was still forecasting a drop to the $20,000 range.

Cointelegraph takes a look at five factors which could shape BTC price action in the coming days.

Stocks and the U.S. dollar continue to diverge from predicted behavioral patterns when it comes to Bitcoin.

After China took aim at big tech late last month, Bitcoin began a serious rebound but stocks were delayed in making up for lost ground.

United States markets are now back on the up, however, while China remains nervous. As a result, the U.S. dollar is losing ground against its peers, something which runs contrary to predictions.

At the time of writing, the U.S. dollar currency index (DXY) traded at just above 92, down from highs above 93 a week ago.

As Cointelegraph reported, analyst Crypto Ed believes that DXY needs to hit local highs of its own at around 94 before reversing downwards and giving Bitcoin room to breathe. This, under current circumstances, is looking difficult to fulfill.

“The dollar appears to be breaking down from the local ascending wedge,” fellow trader and analyst Scott Melker summarized last week. 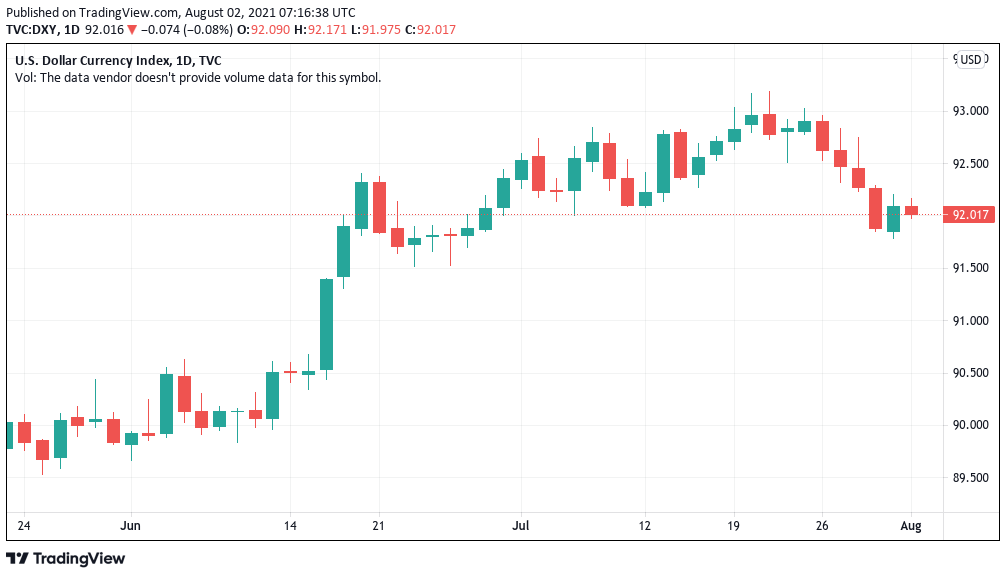 Beyond China, however, traditional markets still face familiar problems of their own, these still apt to put the cat among the pigeons when it comes to longer-term performance.

“Shares remain at risk of a short-term correction or volatility as coronavirus cases rise globally, the inflation scare continues and as we come into seasonally weaker months, but surging company profits in the U.S. and lower bond yields are providing support,” Shane Oliver, head of investment strategy and chief economist at AMP Capital, said in a note quoted by Bloomberg Monday.

When it comes to Bitcoin price action, it’s a tale of two markets this week.

The blistering rally over the past seven days brought one group of investors in particular into focus — the large-volume buyers and sellers on over-the-counter (OTC) markets.

While retail also picked up, it was these larger players who were on the radar of analysts.

As exchanges’ BTC balances began to fall precipitously, speculation began to flow that institutional entities were back buying up the spare Bitcoin supply in a big way.

At the same time, some old hands appeared to be selling, a phenomenon put down to “disbelief” which nonetheless formed a sticking point for further price gains.

As the weekend drew to a close, however, OTC activity also began to err on the side of caution. Data from major derivatives platforms, notably FTX, showed bets piling up for a price dip, something which popular trader Pentoshi suggested could be linked to a cryptocurrency tax bill that could be ratified by U.S. lawmakers this week.

“$131B worth of $BTC moved yesterday, but only 1% from the exchange deposits/withdrawals. Fund Flow Ratio for all exchanges hit the 2-year low,” on-chain analytics service CryptoQuant noted Monday.

“This might indicate $BTC OTC trading by big players.”

It’s by no means all doom and gloom in Bitcoin, despite changes in trading habits.

The difficulty, arguably the key regulator of the network, saw its first positive adjustment since the May price crash this weekend — up 6% and set for further gains in 11 days’ time.

This is no mean feat — the huge upheaval among miners caused by China is now in retreat as players settle overseas or increase existing non-Chinese operations. 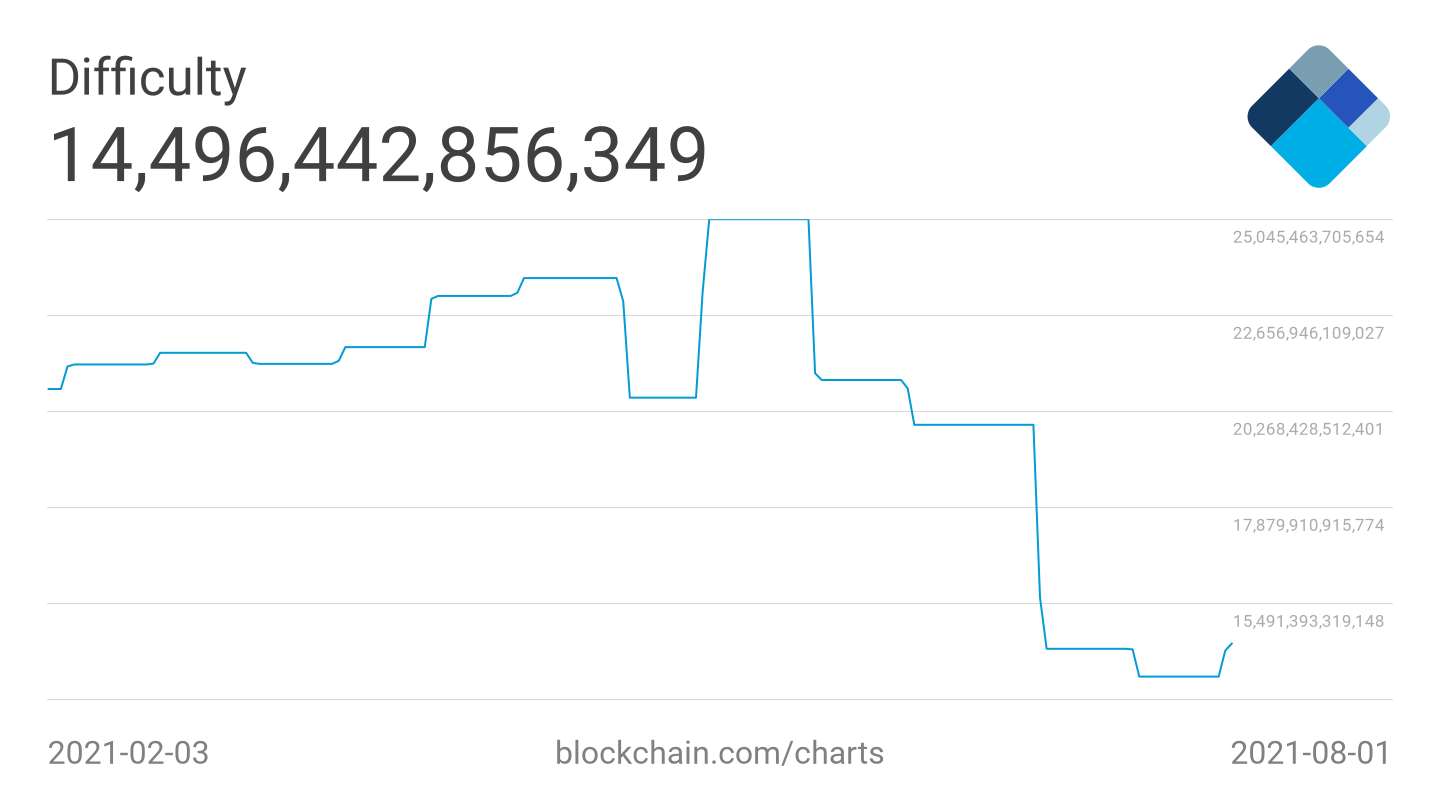 This is further evident in hash rate, which according to best estimates briefly surged back above 100 exahashes per second (EH/s) over the weekend.

“It's stunning that Bitcoin hashrate just had its largest drop in history and price is up 40% in 10 days,” asset manager Travis Kling reacted at the weekend.

“Antifragile to an awe-inspiring degree. The world's never had anything like this thing and it's an honor to just be involved.”

Besides the China narrative, another key talking point that appears to be diminishing in importance is the pit of Bitcoin’s mini bear market — the Grayscale Bitcoin Trust (GBTC) share unlockings.

While dubious as a market force at best, the unlockings caused uproar among even mainstream financial entities, who were convinced that they would crash the BTC price further.

This turned out to be a non-starter, and with the unlockings almost over, GBTC itself is increasing its real-time market appeal.

This is apparent in the fund’s premium trending back to zero from a maximum of -15.5%. At the weekend, with the latest data yet to become available, the premium stood at around -6%.

“The final batch of GBTC unlocks have cleared, causing the GBTC premium to recover significantly from a 15.5% discount on the 15th of July to a discount of just 6.67%, possibly a signal that investors are confident in BTC’s recent recovery,” Delphi Digital, a research, consulting, and investment firm, argued at the time.

No room for greed... yet

The slight cooling from local highs above $42,000 has in fact been therapeutic for market sentiment based on one metric’s evaluation.

According to the Crypto Fear & Greed Index, which takes multiple factors into account when gauging sentiment across crypto markets, the dip below $40,000 has flushed out “greed.”

In the meantime, $40,000 is by no means lost, with BTC/USD fluctuating around the level while doing its best to flip it to sturdy support. BTC price action, therefore, has room to grow without impacting sentiment to the extent that a sell-off is hugely likely.

For contrast, Fear & Greed languished in the “extreme greed” zone just one week ago, seeing a giant transformation as Bitcoin ran up and exited the $30,000 zone.

“Wow, Bitcoin Fear-And-Greed-Index significantly recovered from its heavy lows seen after the major bearish declines. Showing a lot of demand in form of greed came into the market with recent volatility upside bounce,” trader, investor and analyst Vince Price commented in one of many surprising reactions to the changes.