Spot gold price rose above $1500 handle on Friday, recovering from $1507/ $1483 dip after Fed rate cut. Widely expected action of the US central bank resulted in rather mild action of the dollar that kept the yellow metal, which usually moves in opposite direction, largely unchanged. Gold price holds in two-week consolidation range after pullback from $1557 (new six-year high) found footstep at $1484 zone (reinforced by the top of rising daily cloud), but recovery attempts were limited and capped by converged 20/30DMA's at $1515 zone. Near-term action lacks firmer direction signals as daily techs remain in mixed setup, suggesting that current congestion may extend. The yellow metal will look for a catalyst to spark fresh action and signal direction, with Brexit story and forecasts on Fed's next steps, to be also in focus of traders. Higher base and daily cloud top ($1484) mark pivotal support, followed by rising 55DMA ($1476), with firm break lower expected to generate stronger bearish signal for extension of pullback from $12557 peak. Conversely, lift and close above $1515 resistance zone would signal completion of higher base and shift near-term focus higher. 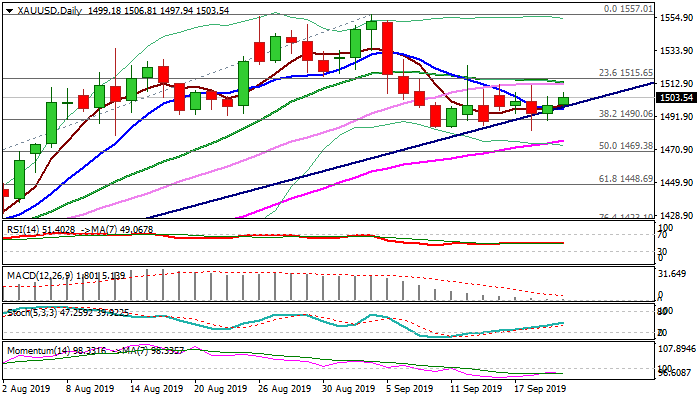 Interested in Gold technicals? Check out the key levels

AUD/USD consolidates the rally above 0.67 on China's PMI, weaker USD

USD/JPY drops back towards 107.50 following another failed attempt towards 108.00, despite a risk-on rally in the Asian equities. The spot tracks broad US dollar weakness, especially after US President Trump's softer stance on China boosted risk appetite.