XAUUSD, H4 – Gold prices rose to test 1,900 again after May’s US CPI inflation report showed a continued rise. The annual inflation rate rose from 4.2% in April to 5% in May. This was against market expectations of 4.7%, the highest inflation figure since August 2008, while core inflation (excluding food and energy prices) rose to 3.8% from the 3.0% seen in April. The continued high inflation was a result of rising consumer demand as economic activity began to resume. 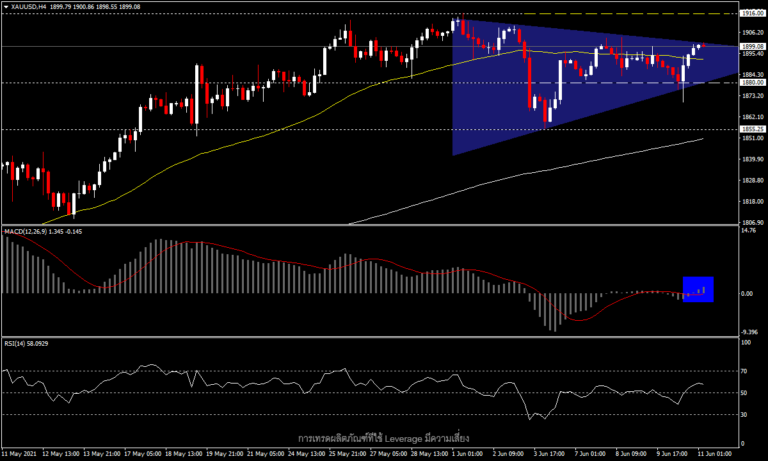 However, despite the reported higher than expected inflation data being the highest since 2008 and given the Fed’s previously unclear stance on inflation, the inflation jump was only temporary and is just a reflection of the impact of Covid-19 in the past year. As a result, during the inflation report last night the Dollar strengthened initially, with the USD index rising from the 90.00 zones, making a high at 90.30 before returning to 90.00, but now at 89.93.

However the data failed to positively impact the US Dollar; instead, the USD depreciated after the publication of the data, showing a “buy the rumors, sell the news” move in the market. The USD index declined and re-tested the 90.00 psychological support level although it jumped briefly to the 90.30 level after the data was published. The USD movement is seen to remain in a small range between 90.00-90.30 in the near term. EURUSD was relatively volatile before the US session following the announcement of a relatively neutral ECB policy meeting as expected, then remained trading in the small range between 50-period SMA and 200-period SMA in H4 between the 1.2180 – 1.2140. USDCHF, which is seen as moving in line with the USD index, is also back trading near the S1 Weekly pivot support level and is expected to remain traded in the weekly S1 pivot point range (0.8940-0.9000). XAUUSD surged to a post-CPI high from $1871 to $1894 but was seen to be a bit off the resistance at 50-period SMA in H4 at $1894. The pressure on gold is still downwards and is now trading in the weekly pivot point area. 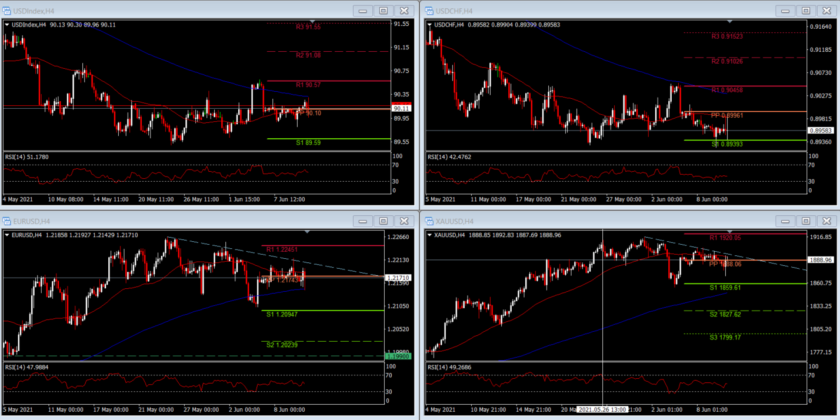 The narrative of the USD movement is expected to be closely watched as the FED policy meeting (FOMC) takes place next week. Investors want to see if the FED will now take the impact of inflation seriously in their meetings or will they still stand firm with the stance that the impact of high inflation is only temporary?

In the meantime, continued high inflation reports and a lack of recovery for the Dollar coupled with the 10-year US Treasury yield, which has fallen more than 7% this week to a six-week low of 1.43%, will be key boosts for gold prices on Friday and may continue into the next week as the Fed is due to follow up over the weekend ahead of the meeting.

However, even though the fundamentals are supportive for XAUUSD, technically XAUUSD is facing significant resistance at 1,900, above the 50-day SMA, where MACD is able to rise above the 0 lines but the RSI is making a downward move. If the price manages to break up the next resistance will be at the original high of 1,916, while today’s first support is at the 1,880 zones.