Incoming economic data shows deceleration but the overall picture is still historically inconsistent with imminent recession. The 10yr-3m yield curve hasn’t yet inverted. And the 10yr-2yr has recently been steepening with rising interest rates rather than steepening with falling interest rates (which is typically the recession warning sign). The 10yr-2yr is probably still in an overall flattening trend and seems likely to invert again before the next recession.

In terms of magnitude, the recent oil price spike is not quite consistent with past instances that catalyzed recessions. Weakened demand from China is perhaps countering some of the negative supply shock. Nevertheless, the China slowdown is still a headwind for the global economic outlook on net.

Leading indicators for the labor market, looking at the San Francisco Fed model, continue to be strong. Overall, the data suggests modest but continued economic growth in the near-term.

Last week’s jobs report was mixed. Headline job gains were good (+428k), but the labor force participation rate fell and there was a discrepancy between the establishment and household surveys (establishment= +428k, household= -353k).

Rising mortgage rates are likely to diminish housing demand somewhat but the picture of overall housing activity–as seen in building permits and housing starts–is still inconsistent with going into a recession. 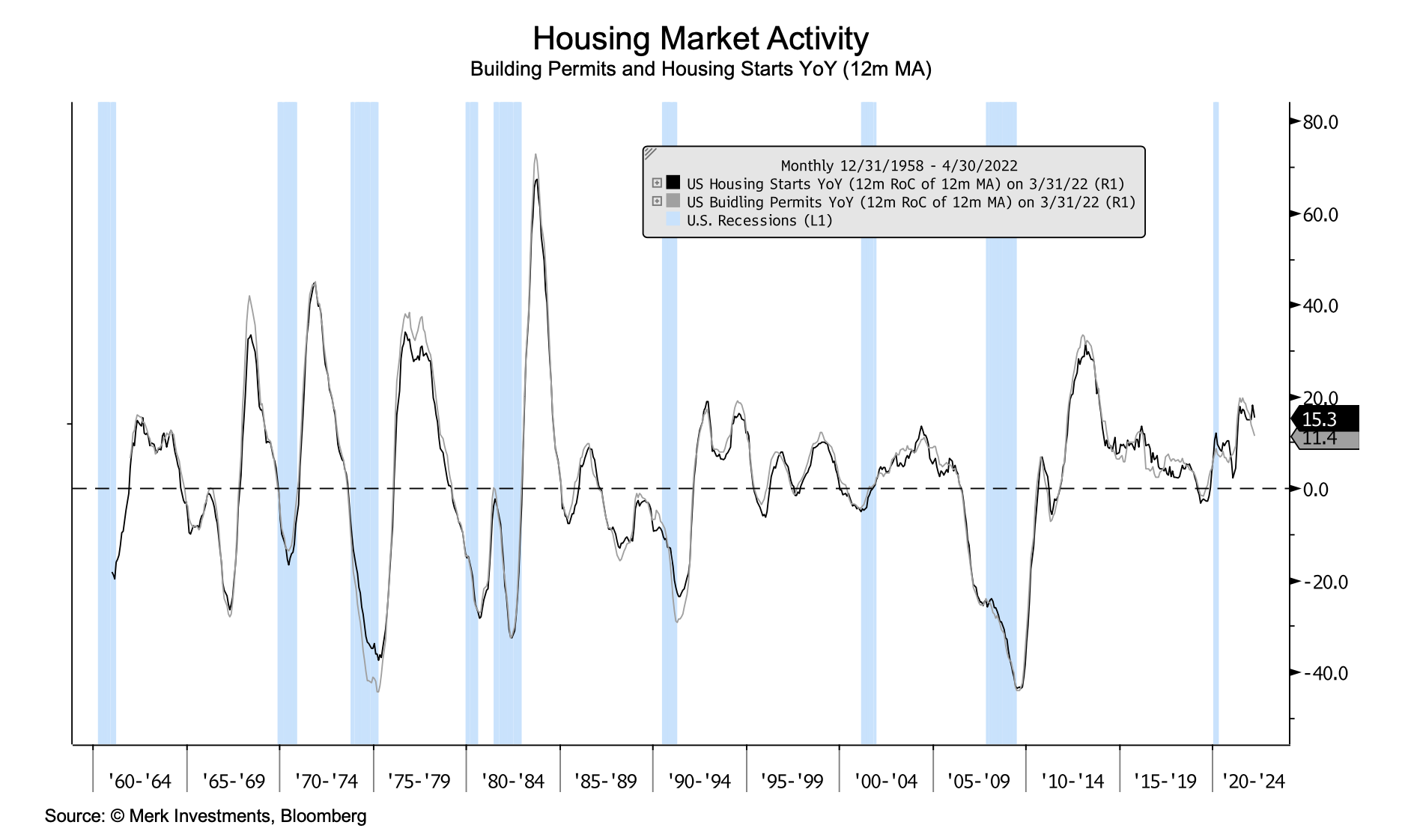 In general, the data suggests we remain in an ongoing, albeit mild, expansion. Expansion is the natural state of the economy, so the burden of proof is always on the pessimists. While recession risk is definitely elevated, the evidence is not beyond a reasonable doubt that the economy will go into recession over the next six months. More medium-term (i.e., 6-24 months), I think a soft-landing or mild recession remain more likely than a major recession.

Nevertheless, there is a great deal of global uncertainty–with exogenous shocks from the Russian invasion of Ukraine and China lockdowns.

The Merk Hard Currency Fund is a no-load mutual fund that invests in a basket of hard currencies from countries with strong monetary policies assembled to protect against the depreciation of the U.S. dollar relative to other currencies. The Fund may serve as a valuable diversification component as it seeks to protect against a decline in the dollar while potentially mitigating stock market, credit and interest riskswith the ease of investing in a mutual fund. The Fund may be appropriate for you if you are pursuing a long-term goal with a hard currency component to your portfolio; are willing to tolerate the risks associated with investments in foreign currencies; or are looking for a way to potentially mitigate downside risk in or profit from a secular bear market. For more information on the Fund and to download a prospectus, please visit www.merkfund.com. Investors should consider the investment objectives, risks and charges and expenses of the Merk Hard Currency Fund carefully before investing. This and other information is in the prospectus, a copy of which may be obtained by visiting the Fund's website at www.merkfund.com or calling 866-MERK FUND. Please read the prospectus carefully before you invest. The Fund primarily invests in foreign currencies and as such, changes in currency exchange rates will affect the value of what the Fund owns and the price of the Funds shares. Investing in foreign instruments bears a greater risk than investing in domestic instruments for reasons such as volatility of currency exchange rates and, in some cases, limited geographic focus, political and economic instability, and relatively illiquid markets. The Fund is subject to interest rate risk which is the risk that debt securities in the Funds portfolio will decline in value because of increases in market interest rates. As a non-diversified fund, the Fund will be subject to more investment risk and potential for volatility than a diversified fund because its portfolio may, at times, focus on a limited number of issuers. The Fund may also invest in derivative securities which can be volatile and involve various types and degrees of risk. For a more complete discussion of these and other Fund risks please refer to the Funds prospectus. The views in this article were those of Axel Merk as of the newsletter's publication date and may not reflect his views at any time thereafter. These views and opinions should not be construed as investment advice nor considered as an offer to sell or a solicitation of an offer to buy shares of any securities mentioned herein. Mr. Merk is the founder and president of Merk Investments LLC and is the portfolio manager for the Merk Hard Currency Fund. Foreside Fund Services, LLC, distributor.