The WHO seems to have provided a degree of respite to the market fears over the Coronavirus. The World Health Organisation has stated that there was not enough information yet to declare a “global emergency” surrounding the spread of the virus that has already killed now 26 people in China. Markets are breathing a sigh of relief this morning and that is resulting in a swing back out of safety and back into risk plays. The question is whether it is simply some respite before the next swing back into safety. The development of the Coronavirus will be key. For now though, bond yields are recovering higher, which is pulling back on assets such as the Japanese yen and gold. The Chinese yuan which is clearly acutely impacted, is stable this morning a shade under 6.93 versus USD. The oil price has found some support, whilst equities which had threatened a correction in recent days, seem to be getting back on the bull train. Broader forex moves are a little cautious still, perhaps as there is still the potential for the virus to spread further and wider. However, the euro, which has been under increasing pressure in recent sessions, does not look overly positive right now. In the wake of yesterday’s ECB meeting, there has been a decisive negative move. Christine Lagarde cut a cautious President in the press conference. Economic risks are still “tilted to the downside” (which some had expected to have been tweaked). Furthermore, as the review of monetary policy operations by the ECB was released on its website, traders seemed to meet the announcement with a degree of frustration. Perhaps that it will take a year to complete was enough to see selling pressure on the euro, driving EUR/USD below key technical supports. 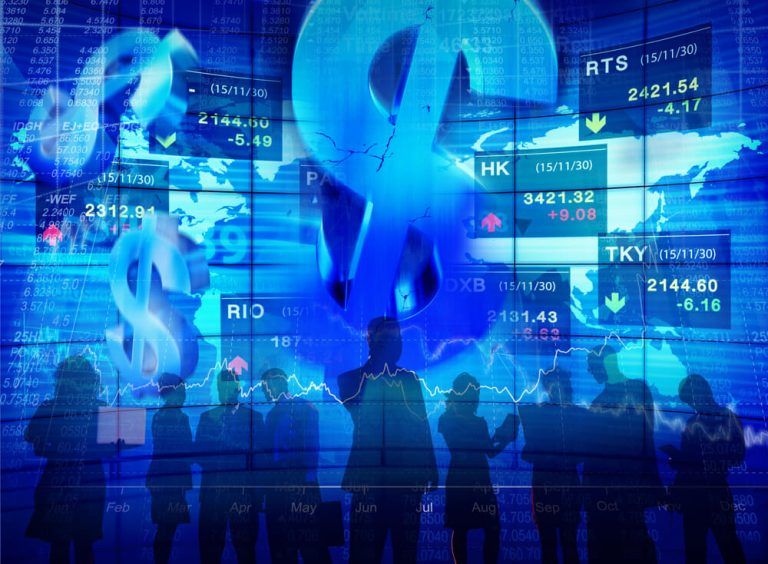 Wall Street closed a shade higher yesterday as the S&P 500 unwound all the earlier losses to end +0.1% at 3325. With US futures also higher there was a degree of stability on the Nikkei, even as the Shanghai Composite continued to fall sharply (-2.8%). In Europe, the outlook is set for recovery, with FTSE futures +0.7% and DAX futures +0.8%. In forex, there is limited decisive moves, although a marginal risk positive bias as JPY and CHF underperform. In commodities, there is a mild slip back on gold by -$3 but the consolidation essentially continues. There is a minor pick up on oil this morning amid respite from sharp recent selling.

The outlook for the DAX has been very positive until the last couple of sessions. Two decisively negative candles in a row threaten the positive outlook, but we see this to be part of the next buying opportunity. Breaking out above the resistance at 13,425 early in January took the market to two year highs and effectively completed a ten week range breakout. The implied target of the break remains 13,900. However, the bulls were unable to sustain a breakout above resistance at 13,596 for an all-time high and the market has since corrected back from 13,640. However, we see this corrective slip as a pullback to the latest breakout and should be a chance to buy. There is gap support at 13,334 which is now a buying area and this morning futures are looking for a reaction higher. Momentum indicators remain strongly configured, with the RSI consistently bottoming around the 45 mark whilst MACD and Stochastics are positively set up. The support of a five month uptrend comes in around 13,210 today, so there is still some potential room to correct back, however, we are increasingly looking at this move as a buying opportunity now. We expect further new all-time highs above 13,640 in due course. 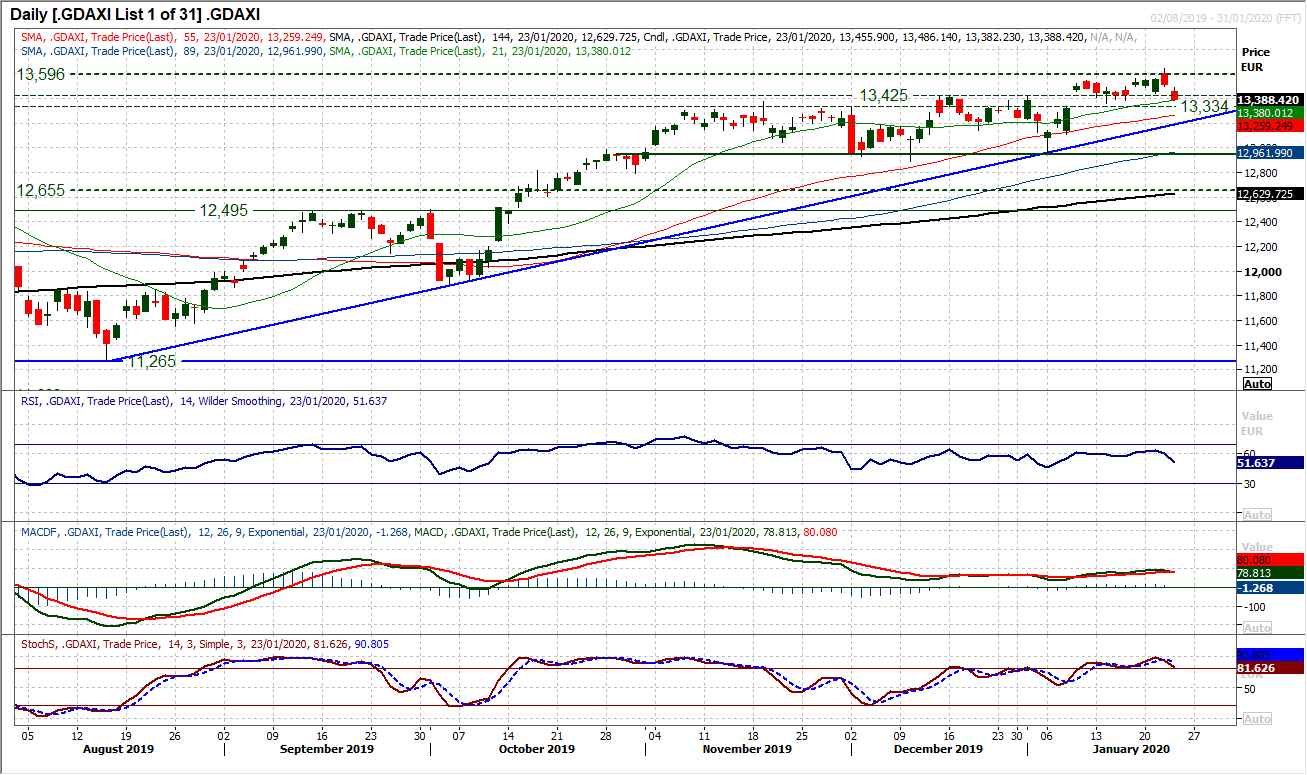 After the sharp recent sell-off, the oil price begun to steady. Having held the support of the November low (the bottom of the band $54.75/$55.00) the bulls have finally found some sort of footing in the market. The question is how sustainable it is. The hourly chart shows initial resistance at $56.05 with the 61.8% Fibonacci retracement (of $51.00/$65.65) at $56.60. Momentum remains very negative with MACD and Stochastics especially suggesting the bulls have a lot of work to convince even support is forming, let alone recovery. A close below $54.75 would be a key downside break. Tentative signs are there but it is very early days. 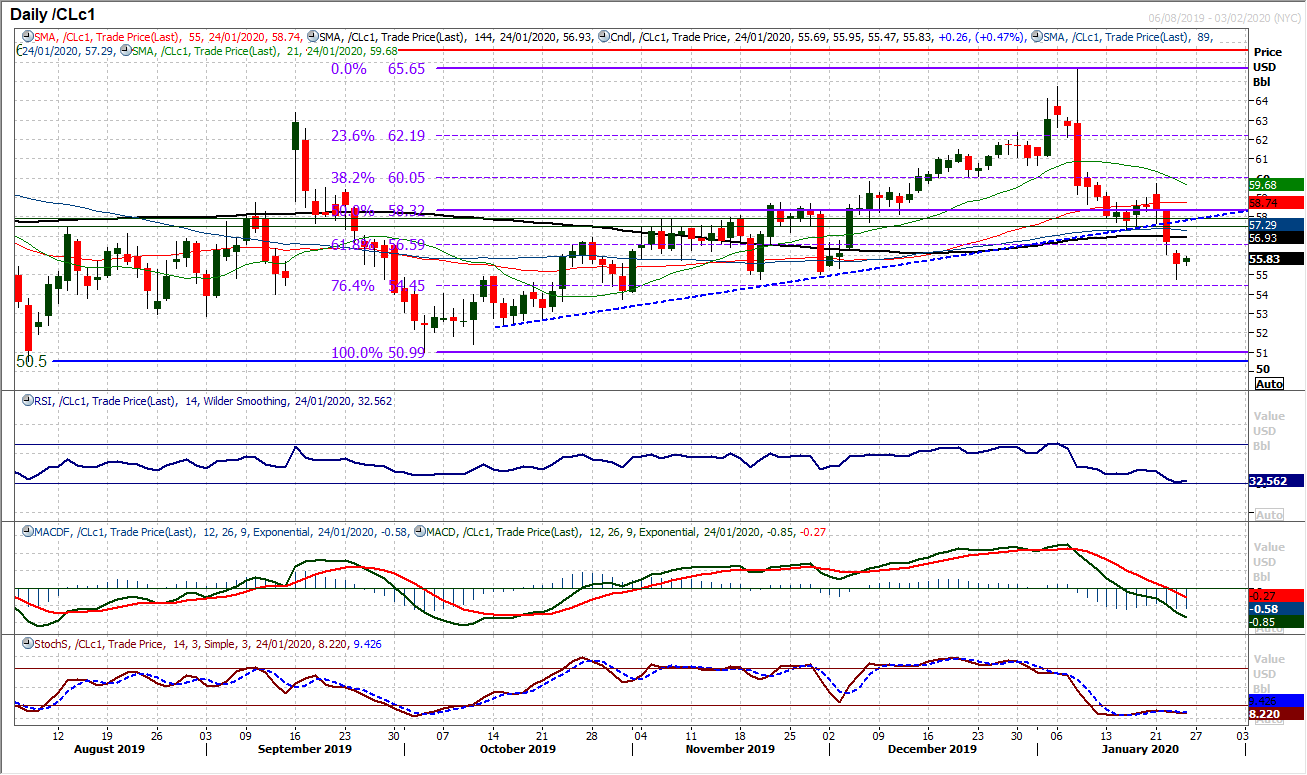 We continue to see the Dow as a buy into near term weakness. All the trends remain positive and momentum is strong. The slip back over recent sessions should be seen as an opportunity. Despite the market closing lower yesterday, the one day candlestick was actually positive (closing above the open) as an intraday correction was solidly bought into, forming a hammer candle pattern. The fact that the low of 28,967 was in the 28,789/29,010 support band, in a move which bolsters the five week uptrend (rising at 28,955 today) increases the conviction of the support. Momentum indicators are positively configured on a medium term basis, and the recent move has just helped to unwind any sense of stretched momentum to renew upside potential. This week’s all-time high at 29,373 now comes back into view for a retest and ultimately further all-time highs. Initial support now 28,967. 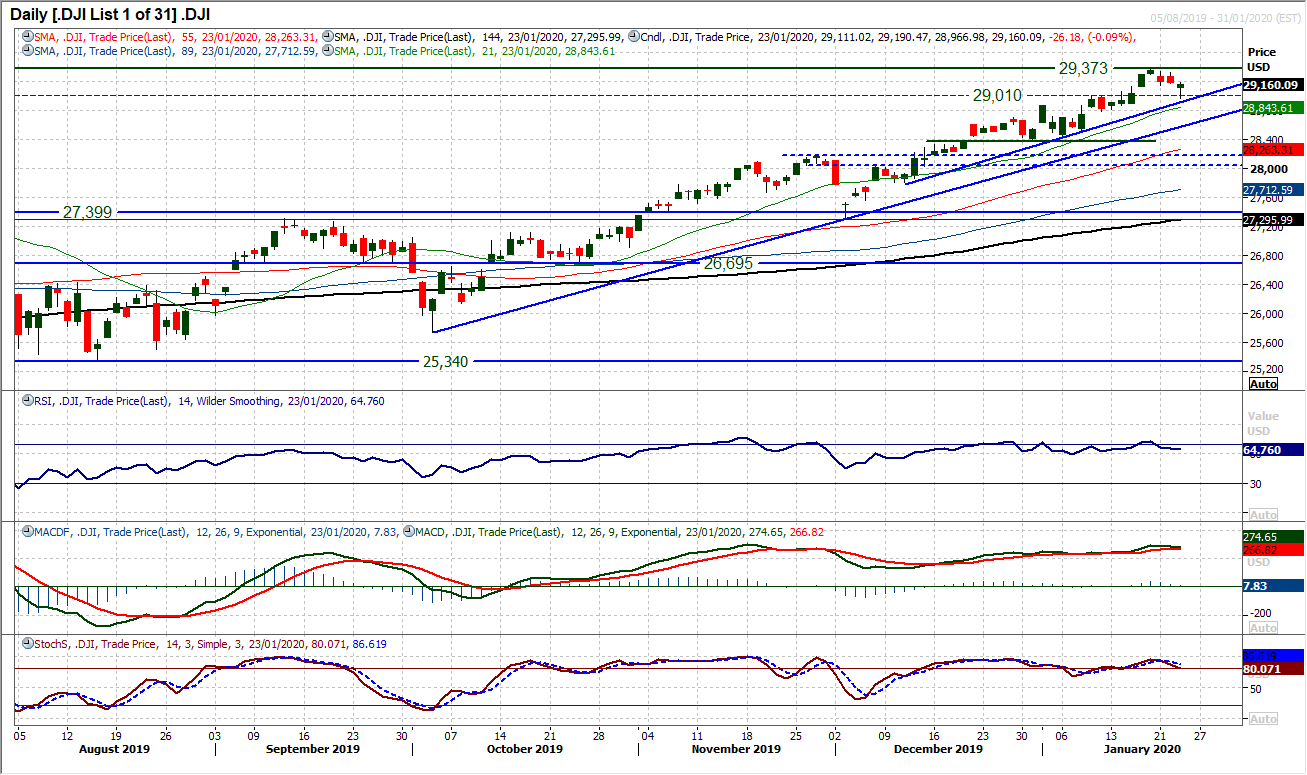