Markets have become more optimistic on Brexit, after the UK and Irish leaders said they see a ‘pathway’ to a deal. Yet, if Boris truly watered down his stance enough to make a deal possible, he will likely lose the support of his hardline Brexiteers, so any accord may be rejected by Parliament. Hence, another Brexit extension that is followed by an election still seem inevitable. Since that could make both a future deal and a second referendum more likely, sterling may extend its relief rally. That said, it’s still doubtful whether this is the beginning of a healthy, sustainable uptrend.

Last week, the EU shot down the latest Brexit proposals by British PM Boris Johnson, which sought to replace the controversial Irish backstop, a policy designed to prevent a hard border on the island of Ireland. The EU insists there should be no physical border between Northern Ireland (UK) and the Republic of Ireland (EU), as that could endanger the fragile peace. The UK agrees, and proposed a plan that eliminates physical checks on that border, replacing them with customs checks at ‘designated locations’ miles away.

However, that doesn’t go far enough for EU officials, who point out that leaving the Irish border open with such scarce checks post-Brexit would lead to smuggling and may endanger food safety. That could impair the free movement of goods and therefore put the entire EU single market at risk, so the UK’s proposals didn’t even form a basis for deeper negotiations.

All this made a deal before October 31 – the date the UK is scheduled to leave – look extremely unlikely.

Yet, headlines yesterday turned this whole narrative around. The British and Irish Prime Ministers met in a last-ditch attempt to find a way forward, and said they may have found just that – a “pathway” towards a deal. The details were scarce, but from the reports that have emerged it appears that Johnson softened his position on the Irish border, allowing the negotiations to get back on track.

If the reports are accurate, the compromise was that Northern Ireland officially leaves the EU customs union but continues to follow EU customs and single market regulations, eliminating the need for checks on the Irish border. That would mean a customs border would be erected along the Irish sea, between Northern Ireland and mainland Britain, so any checks may be conducted at the ports. The pound soared, as the renewed optimism saw investors unwind some of their massive short positions.

Letters from Theresa May

While all the above certainly raise hopes that a deal may be within reach, it’s much too early to get excited. If reaching a solution on the Irish border was so easy, it would have happened ages ago, under Theresa May’s administration. Should Boris truly go for such a major concession, he could lose the support of the die-hard Brexiteers in his own party, who he desperately needs for any deal to pass the UK Parliament.

They might see the deal as jeopardizing the UK’s constitutional sovereignty, by effectively leaving Northern Ireland ‘behind’. Hence, he might reach a deal with the EU, but then face the same situation Theresa May did: a rejection in Parliament. Indeed, it’s highly doubtful that Northern Irish politicians would accept this either, as the DUP party which prop up Johnson’s minority government are against having separate customs arrangements for Northern Ireland.

As such, a deal before October 31 still seems very unlikely, as it may be blocked by UK lawmakers. That is, assuming the two sides can even get to a deal.

But a no-deal exit on October 31 is equally unlikely, as the UK Parliament implemented a law forcing Johnson to ask for an extension by October 19, after the next EU summit concludes. Johnson insists he won’t, and while he might fight that law in the courts, his refusals look more like political theatrics intended to win over voters that have defected to the Brexit Party, rather than a serious ‘last stand’.

Another extension is therefore around the corner. That would make a General Election all but inevitable. Boris has dared the opposition to bring a no-confidence vote several times, but opposition leader Corbyn declined to do so, saying he will only do so once an extension is secured. Hence, Britons could go to the polls to elect a new government by late November or early December.

What might that mean for the pound? The initial reaction may be higher once an election is called. The blueprint for this may be the 2017 snap election called by Theresa May, which saw sterling soar on expectations she could get a bigger majority and strengthen her negotiating hand, helping her secure a better deal. Of course, every election is different, so let’s examine this one.

One look at opinion polls reveals that Johnson’s Conservatives are leading the field, polling in the 30-35% neighborhood. Meanwhile, Corbyn’s Labour party is near the 25% handle, while the Liberal Democrats are around 20% – both favor another referendum.

From a probabilistic perspective, there are two likely outcomes. Either Johnson gains a comfortable majority, strengthening his negotiating hand with the EU and making it easier for him to push any deal through the UK Parliament, or a Labour-led coalition gains power under the promise of a new referendum. Either result may be positive for sterling.

Election relief, but then what?

While the pound could extend its latest relief rally for now, the bigger outlook still isn’t bright. Even if Boris is elected with a strong majority, he may still have difficulties getting his party to go along with a deal that they see as giving away too much.

If Corbyn is elected, his vision of a soft Brexit where the UK stays in the EU customs union would probably face fierce backlash from lawmakers too. They would likely dub it “Brexit in name only”, given Britain’s inability to strike its own trade deals in that scenario.

For whom the (recession) bell tolls

The economic situation is just as worrisome, with the UK being on the brink of a technical recession. The economy already contracted in Q2 and business surveys point to a similar result in Q3, as Brexit-related uncertainties hold back business investment and hiring. 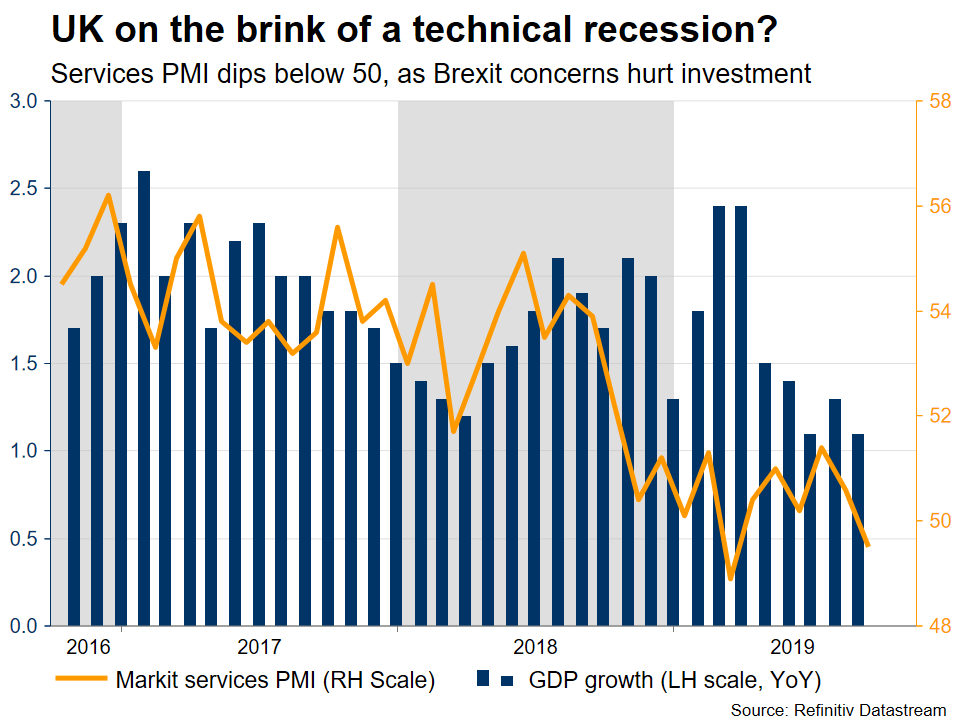 It’s no great mystery. British firms have faced the threat of no-deal Brexit three times this year alone, on top of the global economy slowing down and the US-China trade war sapping sentiment.

All this implies the Bank of England is likely to cut rates soon, perhaps as early as in December, something markets currently assign a mere 30% probability to. Admittedly, that pricing may be too conservative, and the risk clearly lies towards markets factoring in more aggressive cuts should the economy continue to deteriorate. Therefore, monetary policy also suggests that it’s too early to view this as the beginning of a long and sustainable uptrend in the pound.

Sky is the limit?

Finally, let’s examine the technical picture. Sterling/dollar remains in a long-term downtrend, below a downward sloping line drawn from the 2018 peak. If the current recovery continues and the bulls break above the intersection of that downtrend line and the 1.2780 area, the picture would turn neutral, opening the way towards the 1.3000 handle.

On the flipside, if the bears retake control, declines could stall around the 1.2580 handle, where a downside break could open the door for a test of 1.2200.