The virus reality has come back to bite markets just as investors were attempting once again to shrug off the gloom and doom. The daily frequency of tighter Covid restrictions being announced across Europe and dimming expectations of a pre-election stimulus deal by US lawmakers has put a dampener on risk sentiment over the past few days. Uncertainty about the US election and Brexit are adding to the market anxiety. With none of these outstanding issues expected to be resolved over the next week, traders might have to make do with the flash PMIs for October for some guidance.

China bounce is safe and sound

There’s a good chance, however, that the week will get off to a somewhat brighter start as GDP numbers out of China on Monday are likely to show the economy continued to recover in the third quarter. China’s economic output is projected to have expanded by 3.2% in the three months to September, taking the year-on-year rate to 5.2%. If confirmed, this would be a remarkable achievement when considering only two quarters ago, GDP stood 6.8% lower than a year ago. 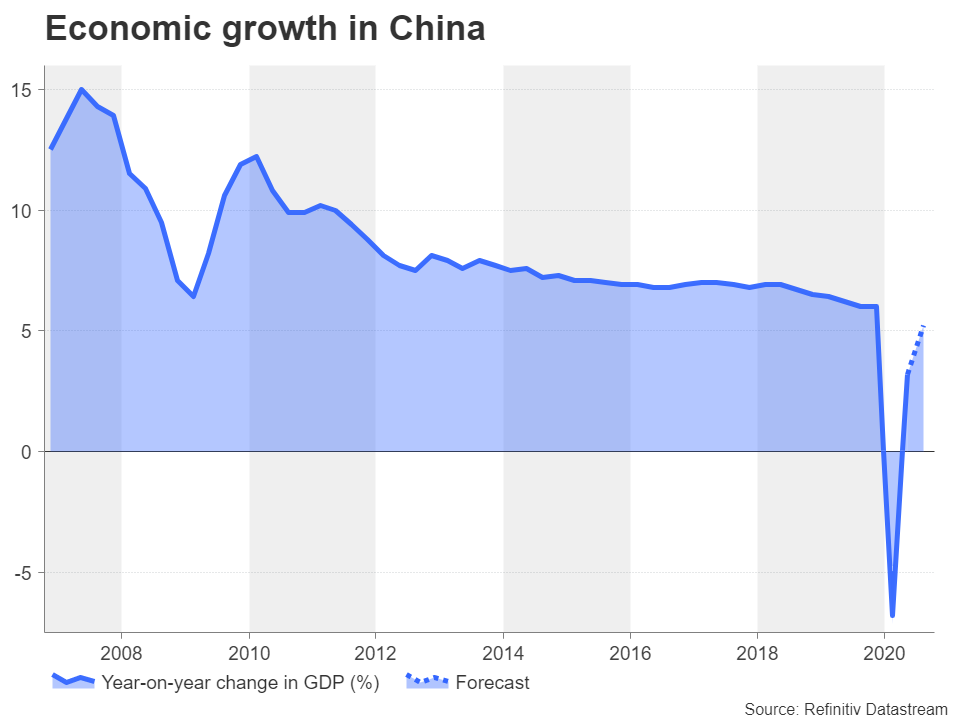 Other data released on Monday will include the monthly prints on industrial output, fixed-asset investment and retail sales. Industrial output and retail sales are both expected to have picked up pace in September, underlining the steady improvement in China’s economic backdrop even as the rest of the world struggles to get the coronavirus under control.

Barring any negative surprises, China’s GDP report could remind markets that there is light at the end of the tunnel, lifting risk assets at the start of the week. However, when it comes to the Australian dollar – the usual cheerleader of the Chinese economy – it might not be wise to anticipate a strong reaction. The combination of souring relations between Beijing and Canberra and mounting speculation of an imminent rate cut by the RBA could possibly hold back gains for the aussie.

Staying within the vicinity, there might be a little bit more excitement for the New Zealand dollar next week. New Zealanders go to the polls this Saturday to elect a new government. If incumbent prime minister Jacinda Ardern wins a decisive victory, securing a parliamentary majority, the kiwi is likely to jump higher when trading opens on Monday.

For the remainder of the week, however, the kiwi will probably be singing the same tune as the broader risk tone. That’s not to say, though, that traders won’t be keeping an eye on domestic data. The quarterly NZIER business confidence survey is due on Tuesday and the consumer price index for Q3 is out on Friday. Any deterioration in those numbers could further reinforce expectations that it’s only a matter of time before the Reserve Bank of New Zealand cuts rates to negative.

Inflation figures are also due out of Japan on Friday, along with the manufacturing PMI, to be preceded by September trade numbers on Monday. But with the Bank of Japan recently upgrading its assessments for most economic regions of Japan, there’s little expectation of a policy change anywhere on the horizon. Hence the data are not anticipated to leave any marks on the safe-haven yen, which has been crawling higher in the past week, including against the greenback, as caution has prevailed in the absence of positive drivers. Unless there was to be a breakthrough in the stimulus talks in Washington or some signs that new virus cases in Europe are slowing, it’s hard to see the risk-off mood ebbing substantially anytime soon, which can only mean ongoing underlying support for the yen. 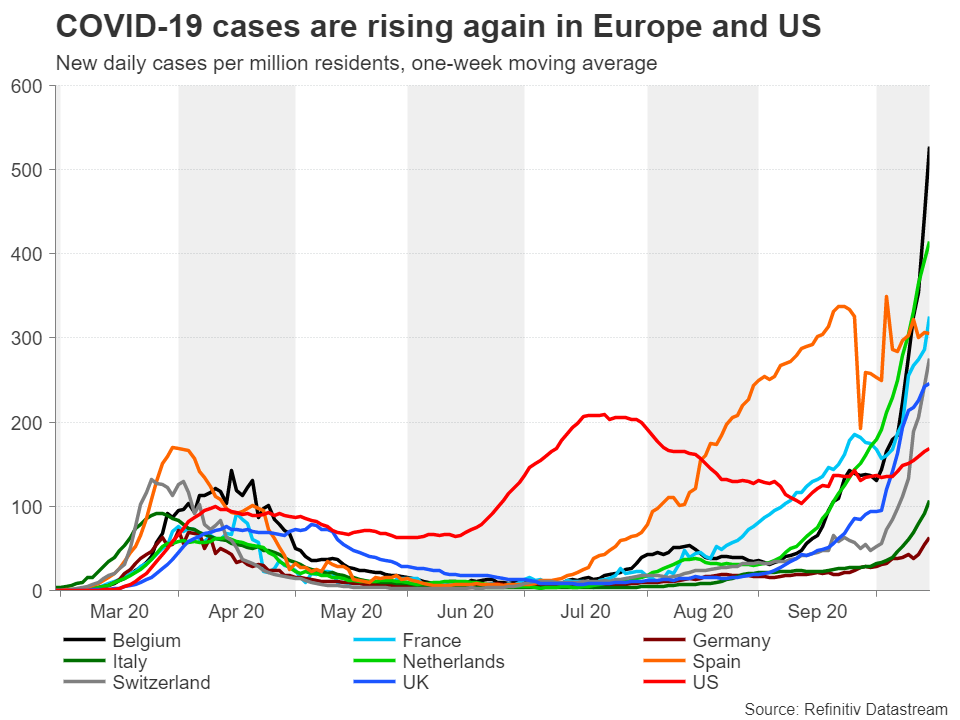 Is Europe headed for a double-dip?

After a strong bounce-back in early summer, it didn’t take long for the Eurozone recovery to hit a wall. Although the initial cooling off in the rebound wasn’t seen as too worrying, that downward trend is forecast to have continued into October, at least as far as the services sector is concerned. Manufacturers have fared much better since August as retailers and the hospitality industry have been harder hit by the gradual tightening in virus restrictions.

But the manufacturing PMI is expected to join the services PMI in edging lower in October, highlighting the difficult challenges ahead for both national governments and the European Central Bank in maintaining momentum in the recovery. The flash PMI reports are due on Friday and could weigh on the euro if they point to further weakness. However, until the US election is out of the way and there are clearer policy signals from the ECB, the euro will probably struggle to break out of its current range of $1.16-$1.19. 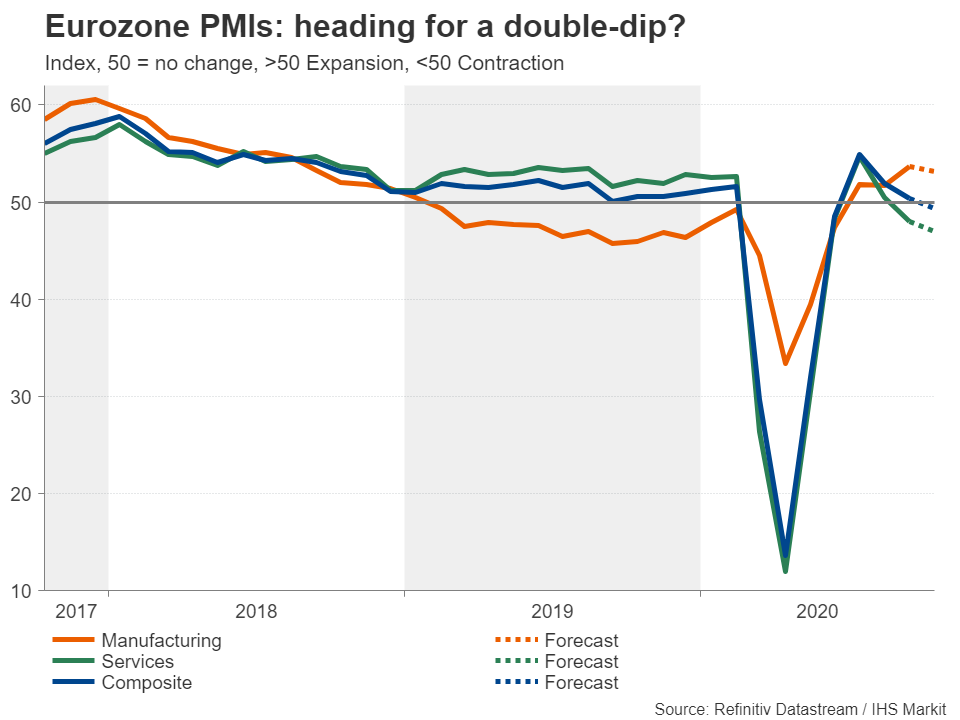 UK PMIs eyed as no breakthrough yet in Brexit talks

Flash PMI numbers will also be doing the rounds in the United Kingdom on Friday. Retail sales data for September to be released earlier the same day will be just as important, while inflation figures for the same month will be watched on Wednesday. UK PMIs have so far held up relatively better than in the euro area, but that outperformance might not last much longer as many parts of the country are now under stricter virus rules as the infection rate remains exceptionally high. 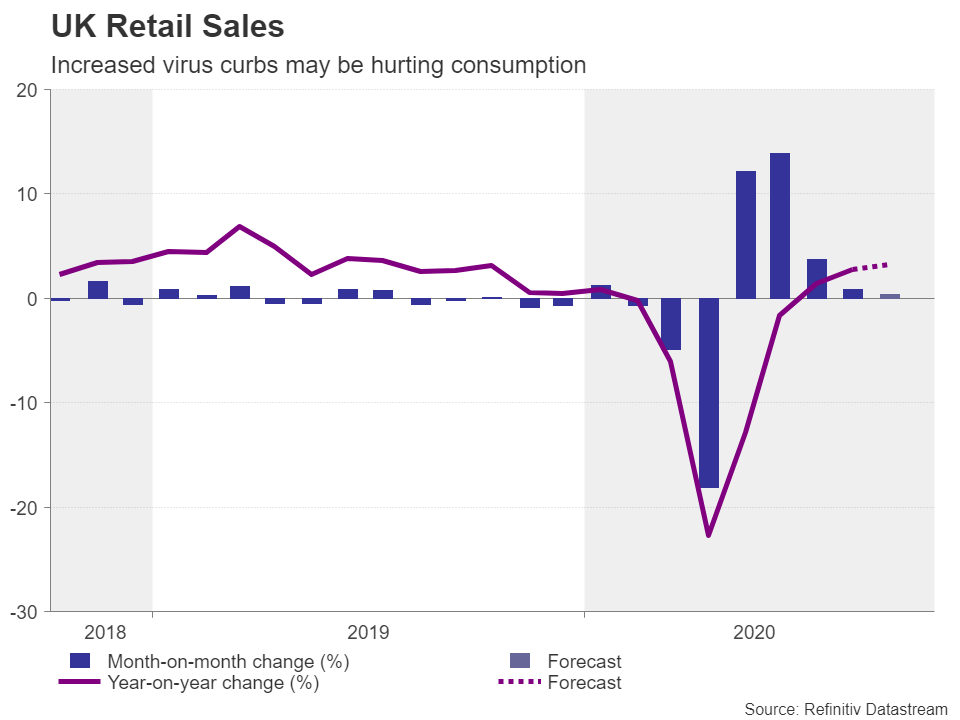 The pound is bound to come under pressure should the data suggest the growing list of regions under local lockdown is choking the recovery, especially as the Bank of England keeps its options open regarding negative interest rates. However, another risk for sterling in the coming days is the Brexit negotiations, which have been extended for two weeks as significant gaps remain. Incoming headlines on how the next phase of intensified talks are progressing are likely to keep traders on edge as it’s hard to see Boris Johnson agreeing to extend the negotiations beyond the end of October.

US election fever is heating up

Over in the United States, election fever is heating up, with Democratic candidate, Joe Biden, maintaining his strong lead over Donald Trump in the latest national polls. However, Trump’s campaign has been reenergized following the President’s recovery from the coronavirus and even though Biden is ahead in most swing states, Trump still has a chance to turn things around and secure a narrow victory.

The opinion polls will therefore be watched much more closely by the markets in the run up to the November 3 vote as it’s looking increasingly likely that the fate of the fiscal stimulus bill is tied to the outcome of the election. Many investors are betting on a ‘blue sweep’ where Democrats would take over the White House and both chambers of Congress, making it easy to pass large stimulus packages. But should the polls start to point to another term of a split Congress, equities could find themselves on the backfoot again and the US dollar would become the target for fresh safe-haven flows. 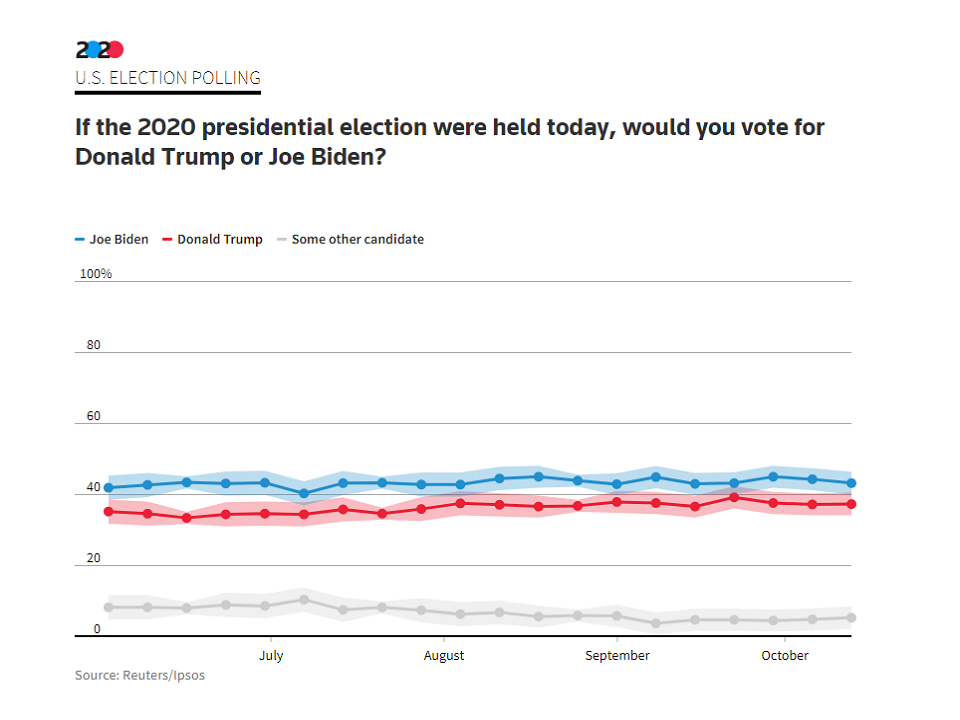 In the meantime, the flurry of housing data and the preliminary PMI readings by IHS Markit will offer some clues as to the strength of the US recovery. Building permits and housing starts are out on Tuesday, to be followed by existing home sales on Thursday. The flash PMIs for October will wrap up the week on Friday.

North of the border, Canadian inflation and retail sales figures should attract some attention for the loonie on Wednesday.