There are no central bank meetings next week but there is an avalanche of economic data from America, Europe, and Japan to keep traders entertained. Politics will also be in the spotlight with a G7 meeting over the weekend. Global leaders are expected to outline steps to stabilize energy markets, which could have tremendous implications for central banks.

The spike in energy prices and their impact on consumers has turned into the most important political issue across the world, sending global leaders scrambling to come up with solutions or suffer the wrath of angry voters. With midterm elections coming up in the United States, the White House is in the eye of the storm.

It’s not only politicians feeling the burn. Energy prices are one of the main drivers of inflation expectations in markets, which in turn drive central bank decisions. The Fed won’t need to be as aggressive with rate increases if oil prices finally cool down.

With this in mind, the meeting of G7 leaders in Germany this weekend could be crucial. Stabilizing energy prices is high on the agenda, amid whispers that even drastic measures like price controls are under consideration. These summits rarely produce any real action, but then again, markets only need to sense something is on the horizon to move. 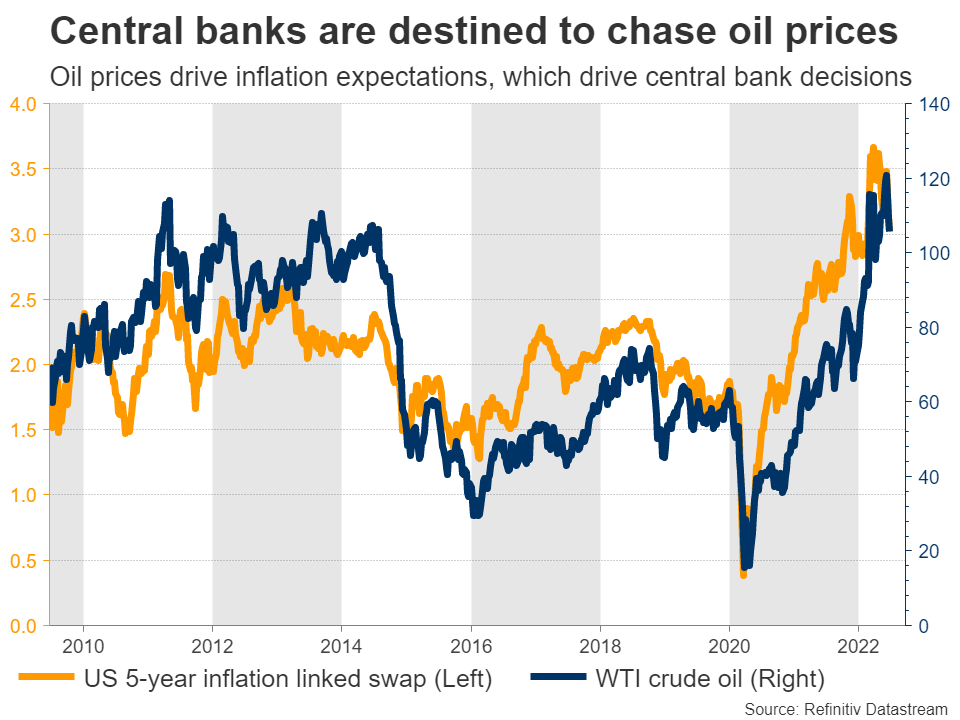 If oil prices extend their latest retreat, that could have repercussions in the FX arena too. The devastated Japanese yen and to a lesser extent the euro would likely get some valuable breathing room and might even stage a relief rally, as both economies are major importers of energy.

Beyond that, there is also a forum on central banking organized by the ECB. This event is usually academic in nature but market participants will still tune in for any signals from the ‘big 3’ on Wednesday - Fed Chairman Powell, ECB President Lagarde, and BoE Governor Bailey.

In Europe, there’s both good and bad news. The good news is that inflationary pressures finally seem to be losing steam according to the latest business surveys. The bad news is that this is happening because consumers have started to cut back on spending.

Business confidence has fallen sharply and new orders have stalled, which suggests the economy is slowing rapidly and the time window for the ECB to raise interest rates is closing. Market pricing suggests interest rates will end the year at 1% from -0.5% currently, which seems unrealistic considering the weakening data pulse. 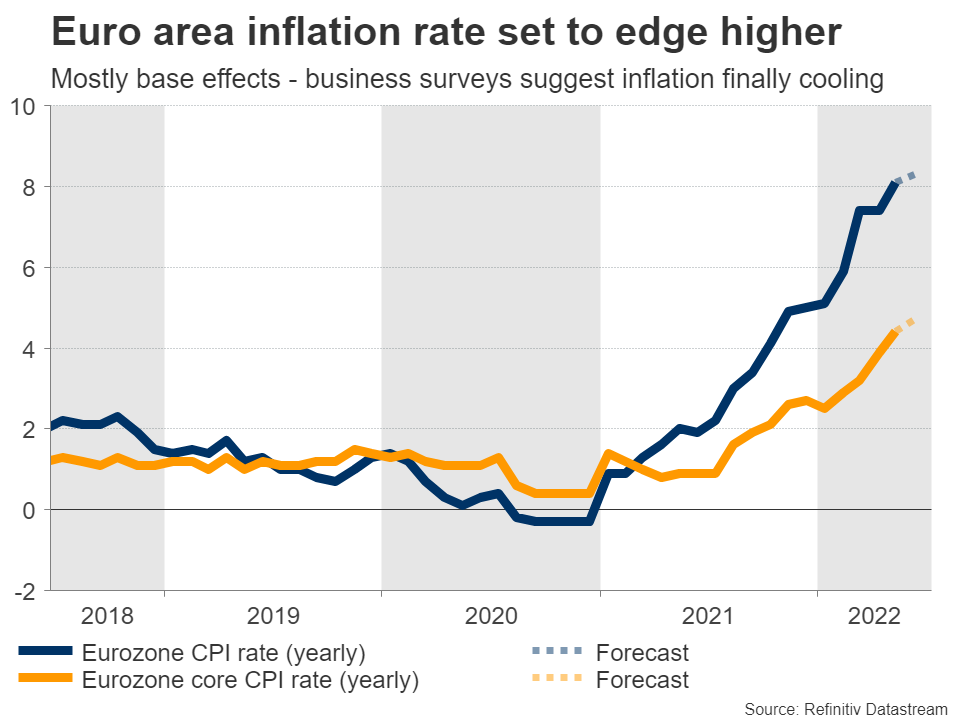 The next clue in this puzzle will come on Friday, with the Eurozone’s latest inflation report. Even though there are some early signs inflation has started to cool, the yearly CPI rate is still likely to edge higher as some very soft monthly prints from last year now drop out of the 12-month calculation.

As for the euro, it’s difficult to envision any trend reversal while energy prices are so high and recession indicators are flashing red. Historically, the euro’s advantage had always been the Eurozone’s trade surplus. This has now flipped into a trade deficit because of soaring oil prices. Hence, any relief rallies are likely to remain shallow until energy prices calm down.

Over in Japan, economic data have not moved the yen for half a decade now, but that might be about to change. The yen did not care about data releases because there was no prospect that the Bank of Japan would change its policy settings. Now there is. 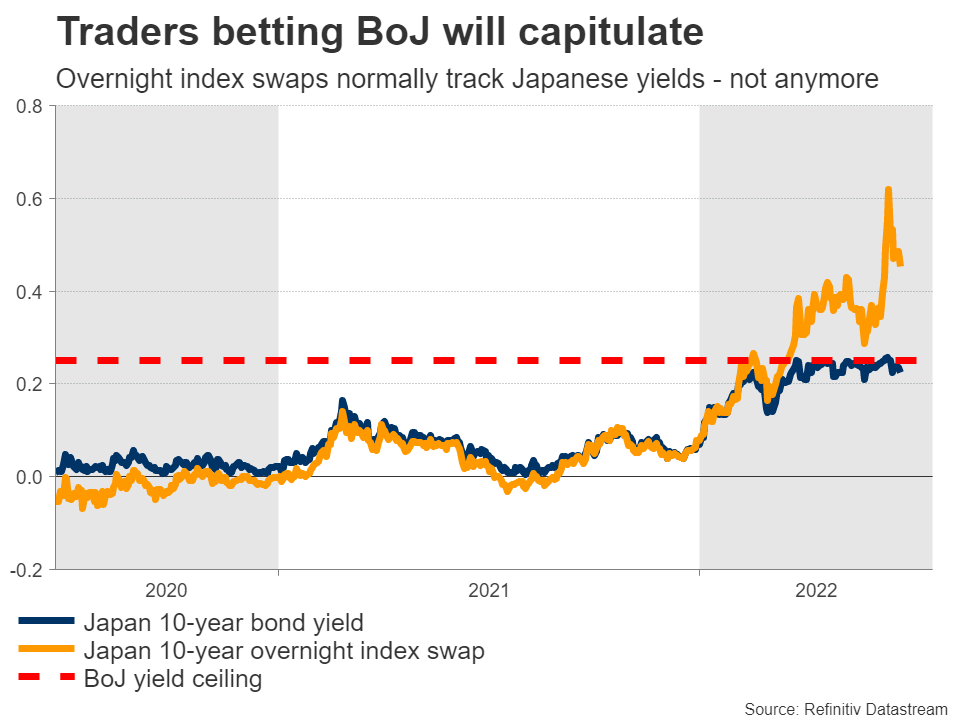 Traders can smell blood in the water, betting that the BoJ will capitulate soon and raise the ceiling it has imposed on Japanese yields - the strategy that has killed the yen. The yen’s collapse has turned into a political mess, with the government facing public outrage about the rising cost of living.

This suggests that FX intervention - even if only to flush out speculators - is on the table if the depreciation continues. Some strategists point to the 145 region in dollar/yen as the line in the sand. It boils down to this - either inflation will fire up enough and the BoJ will pivot by itself or the currency crisis will become unbearable politically and force intervention. 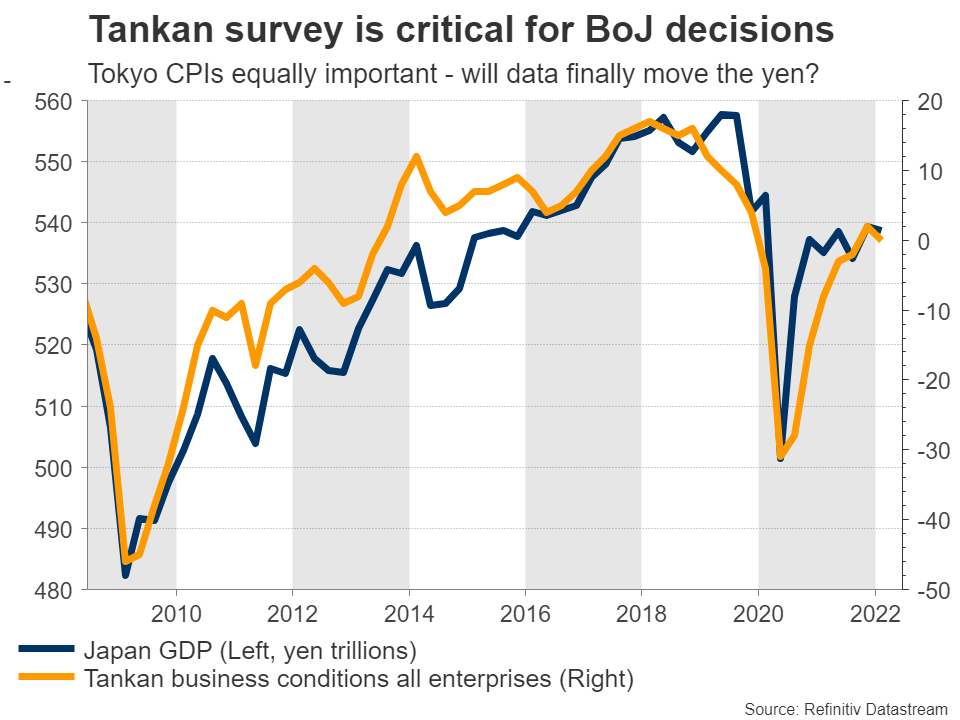 Either way, there is some light at the end of the tunnel. Investors will pay close attention to the summary of opinions from the BoJ’s latest meeting early on Monday, for any hints that policymakers are starting to get cold feet. But the main event will be on Friday, when the BoJ’s Tankan business survey is released alongside the forward-looking inflation stats for Tokyo.

Any signs that inflation is finally gaining some steam might add fuel to speculation about the BoJ changing course in July or September, helping to stop the yen’s bleeding.

Crossing into America, the dollar continues to party. It has turned into the ultimate ‘all weather’ currency, offering a combination of attractive yields as the Fed beats other central banks to the punch and an aura of safety thanks to its reserve currency status.

There are several signs that the US economy is also losing momentum, but the dollar is unlikely to lose its crown while every other major currency grapples with its own demons - euro with energy, yen with the BoJ, and sterling with unstable risk sentiment. 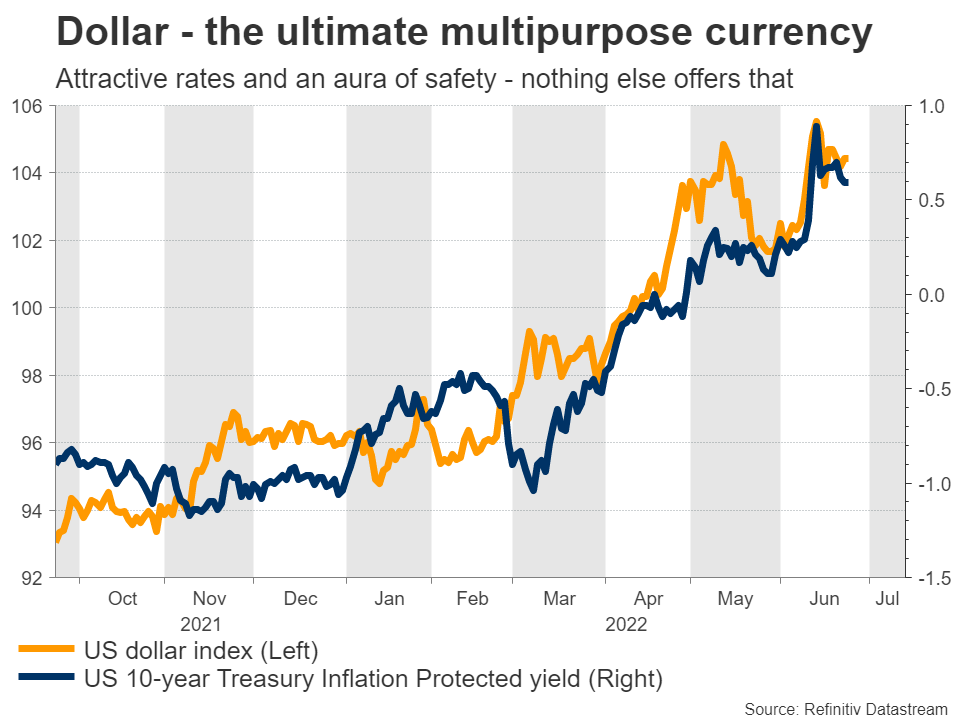 In terms of data releases, the coming week will feature durable goods orders on Monday, ahead of the core PCE price index on Thursday and the latest ISM manufacturing PMI on Friday.

In neighboring Canada, GDP numbers for April are out on Thursday but are likely to be seen as outdated by traders.

Finally in China, investors will get the first glimpse into how the economy performed in June when the official PMIs are released on Thursday.

EUR/USD is extending choppy trading below 1.0200 amid a downgrade to the Eurozone Q2 GDP and risk-aversion. The US dollar pauses its renewed upside ahead of Fed minutes. The euro remains vulnerable to recession fears and the gas crisis.

GBP/USD is trading above 1.2100 in the European session on Wednesday as investors assess the implications of surging UK inflation on the BOE's next policy move. The US dollar fails to hold the upside amid souring risk sentiment ahead of US data and Fed minutes.

Gold turns lower for the third successive day amid the emergence of fresh USD buying. Hawkish Fed expectations, rising US bond yields continue to underpin the greenback. Recession fears could limit losses for the XAU/USD ahead of the key FOMC minutes.