It’s a huge week ahead, with three central bank meetings and a storm of data releases that will reveal how the major economies performed amid paralyzed supply chains. The Bank of Canada might signal that powerful rate hikes are coming, whereas the European Central Bank could push back against speculation of early tightening as Europe grapples with the energy shock. Similarly, investors may have gone too far with pricing in aggressive rate increases in the UK and Australia.

The Canadian economy is absolutely roaring. Growth is coming back online, inflation is scorching hot, businesses are feeling optimistic, the housing market is on fire, and oil prices keep rising. Best of all, the recovery in the jobs market has been spectacular, with employment already back to pre-crisis levels. This suggests wage growth could fire up soon to keep inflation dynamics rolling. 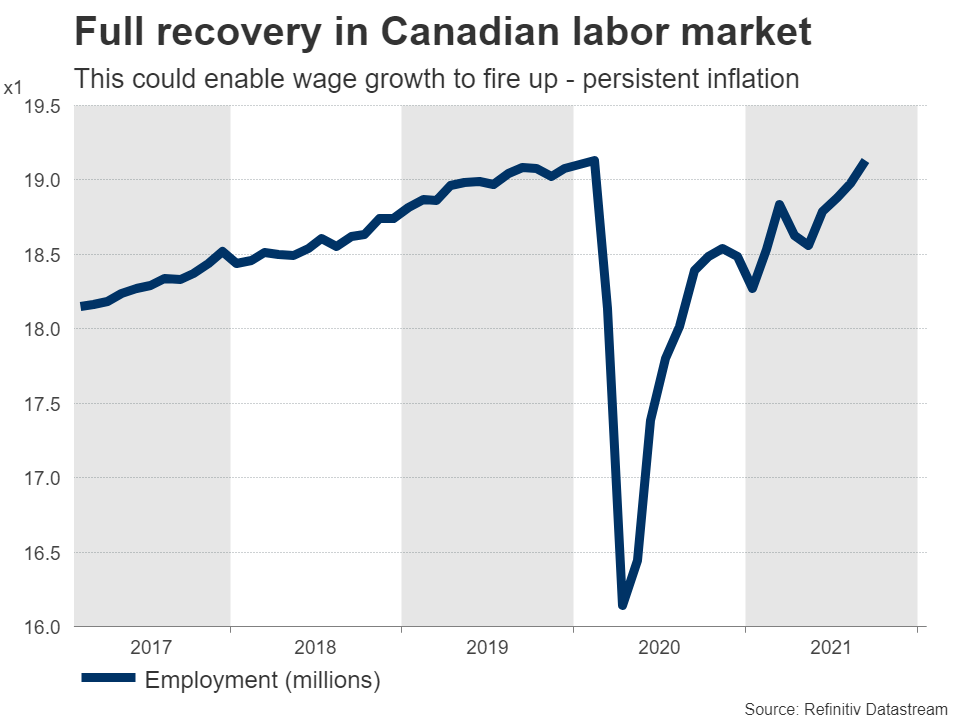 All this will be music to the ears of the Bank of Canada, which meets on Wednesday. Another reduction in weekly asset purchases seems almost certain, before the QE program is terminated completely in December. The real question is how the central bank will respond to investors expecting powerful rate increases.

Money markets are pricing in three rate hikes for next year, with the first one around April. But considering just how strong the economy is, this might be too conservative. The energy industry could go on an investment rampage if oil prices hold strong, turbocharging an economy that is already operating near full capacity. That’s exactly when a central bank needs to step on the brakes to prevent overheating, especially with bubbling risks in housing. 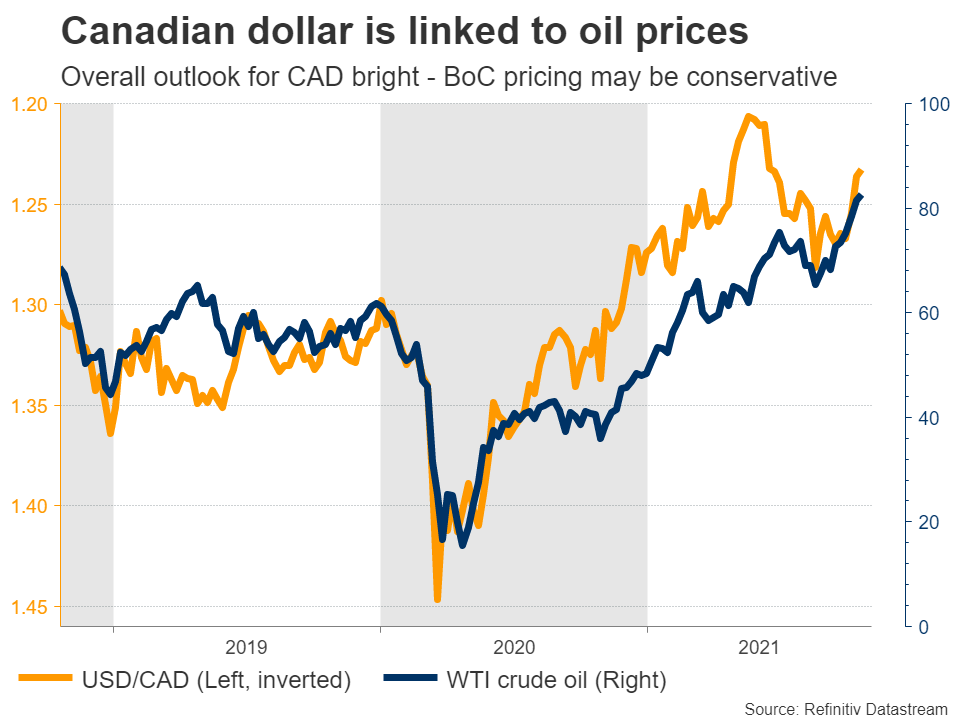 If the BoC indeed recalibrates its language to signal the hiking cycle could begin earlier, that would likely add fuel to the Canadian dollar’s recent rally. The main risk factor is that the BoC doesn’t want to get too far ahead of the Fed, fearful that the loonie will appreciate too fast. But with things going so well, there isn’t much choice.

ECB to play some defense

In the euro area, the situation is not so cheerful. Stagflation fears are dominating, as supply disruptions threaten to kneecap growth but skyrocketing energy prices keep inflation hot. There’s also the risk of a slowdown in China. The property market there is experiencing a painful hangover as the enormous construction sector deleverages, and with China being the Eurozone’s top trading partner, some collateral damage seems inevitable.

In this light, the European Central Bank that meets on Thursday won’t be comfortable with investors pricing in the first minor rate increase (10 basis points) for next year. The only bright spot is that inflation expectations are finally moving higher, but only because of the spiral in energy - the growth outlook remains dark. 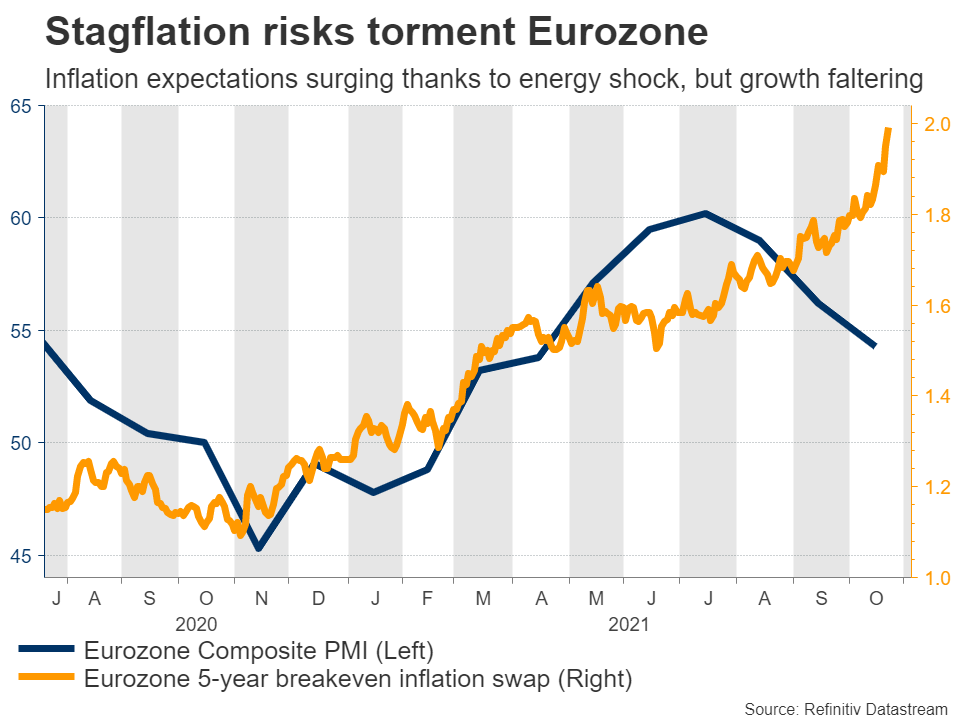 This implies the ECB might push back against market pricing, playing down the scenario of raising rates next year and consequently dealing a minor blow to the euro. President Lagarde recently reaffirmed her stance that inflation is transitory, so the risk of a change in tune seems low.

There’s also a heavy dose of data releases, most notably the preliminary GDP reading for Q3 and inflation numbers for October, both on Friday.

Over in America, the first estimate of GDP for the third quarter will be released Thursday. There is a sharp disconnect between market forecasts and Fed models on this one. Whereas the consensus among economists is for 3.2% annualized growth, the estimate from the Atlanta Fed’s GDPNow model stands at only 0.5%.

The funny part is that the GDPNow estimate started the quarter above 6% but has steadily moved lower as economic data kept disappointing. This spells some downside risks around the upcoming GDP number. 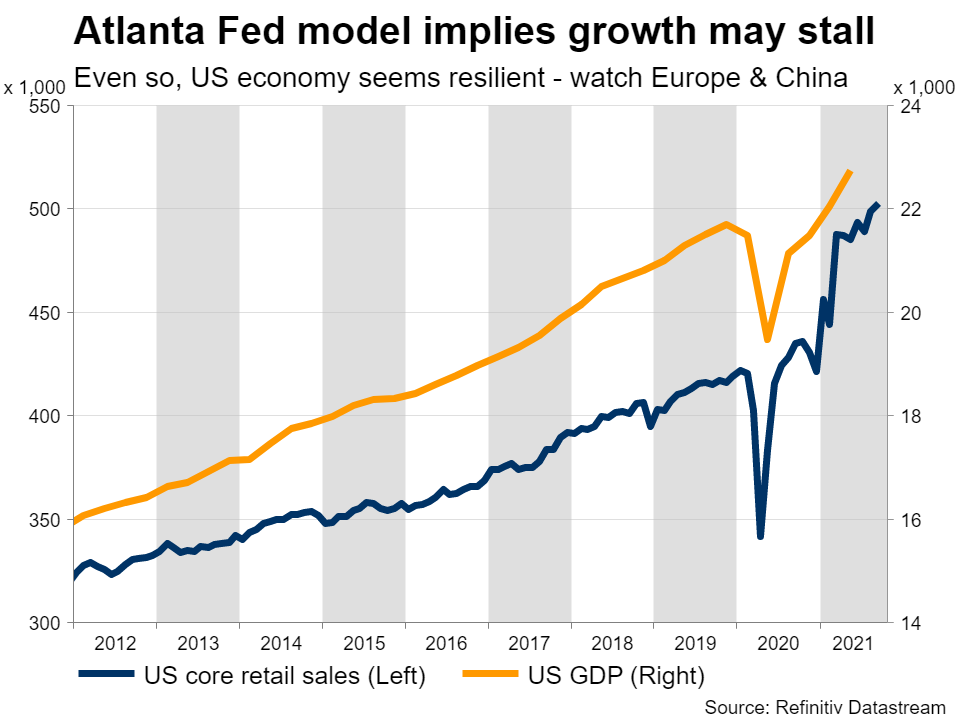 That could pressure the dollar, but any weakness is likely to remain short-lived. America is the most resilient of the major economies right now thanks to its energy independence, and with Congress ready to unleash more spending to power up growth. In contrast, the energy shortages will likely hit Europe and China harder, without any impressive government spending either.

Besides the GDP report, durable goods orders will hit the markets on Wednesday, while Friday will bring a barrage of releases including personal income and spending stats alongside the Fed’s favorite inflation metric - all for September.

In Japan, the central bank concludes its own meeting early on Thursday. Not much is expected. The economy has barely managed to escape deflation even despite the inflationary supernova in the rest of the world. This implies that demand is quite fragile and that the Bank of Japan won’t be joining the global rate-hike party anytime soon. 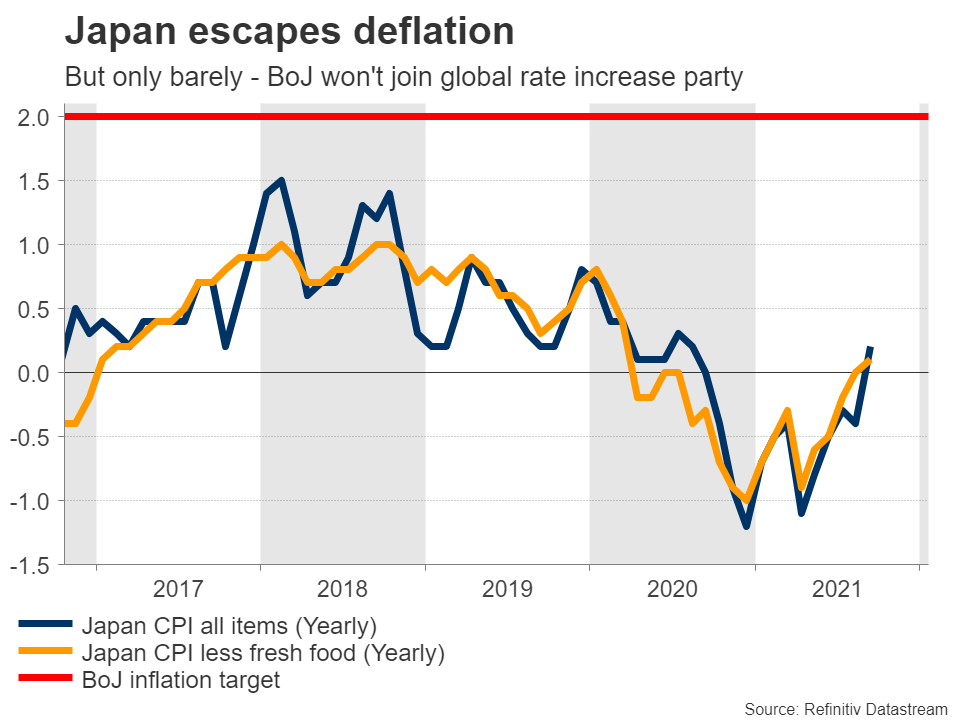 Precisely because there is zero expectation of any real policy changes, the yen no longer responds to BoJ decisions or economic data releases. Instead, the currency is driven almost entirely by how foreign yields move. When global yields move higher as investors price in higher inflation, Japanese yields cannot participate because the BoJ keeps a ceiling on the nation’s bond yields, so rate differentials widen to the yen’s detriment.

That’s exactly what has crippled the currency lately. As long as the market is trading on inflation worries and foreign central bank rate increases, the yen will likely continue to suffer.

In the United Kingdom, finance minister Rishi Sunak will present his latest budget on Wednesday. It seems government spending will be dialed back further to restrain debt levels now the economy is healthier. There’s also a fear that going strong with spending would stoke more inflation and make the Bank of England raise rates faster, exacerbating the debt burden. 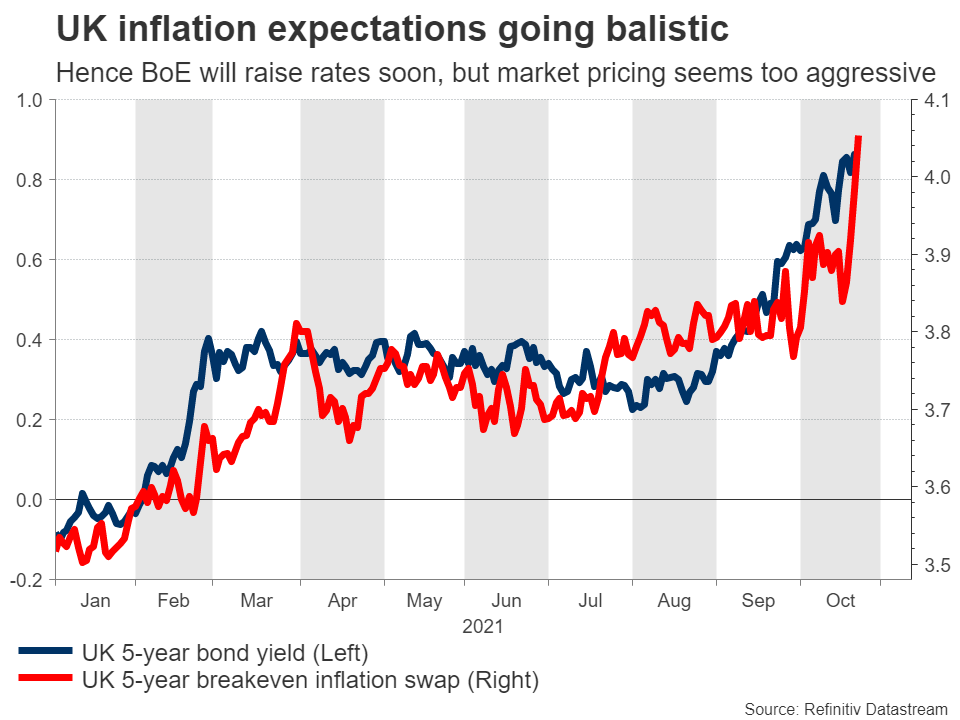 As for the pound, the outlook doesn’t seem so bright anymore. The BoE will raise rates soon in a slowing economy, to fight rising inflation expectations. That risks choking the recovery and may ultimately be a policy error. Indeed, market pricing is already super-aggressive. The first rate hike is priced for December this year, with another three to follow next year. There’s a lot of scope for disappointment here, as the UK economy is not really firing on all cylinders.

Finally in Australia, inflation stats for Q3 are due on Wednesday. Markets are playing ‘chicken’ with the RBA, pricing in the first rate increase for August while the central bank itself insists that won’t happen before 2024. Hence, the RBA also seems priced too aggressively, especially with China battling an economic slowdown and iron ore prices struggling.