As the global growth outlook darkens again, traders will be paying attention to the slew of data that’s expected out of China, the United Kingdom and the United States next week for clues on how major economies are withstanding the increased trade uncertainty. Important indicators are also due from Australia and Japan, while the Eurozone will be enjoying a quieter few days. As central banks around the world switch to a more accommodative stance, the Swiss National Bank could be the next to turn more dovish as investors flee to the safety of the franc, to the ire of Swiss policymakers.

The Reserve Bank of Australia delivered its first rate cut in three years this week and markets are anticipating two more 25-bps cuts before the year end. Despite those odds, the Australian dollar is headed for weekly gains of more than 0.5% against its US counterpart as the Fed could soon join the RBA in lowering borrowing costs. As a result, the aussie has managed to climb to near one-month highs. However, whether the rebound proves sustainable or not could depend on next week’s releases from Australia and China.

Traders will be watching the NAB business confidence index on Tuesday and Westpac’s consumer sentiment gauge on Wednesday, as well as the latest employment report on Thursday. April’s jobs numbers had disappointed and were a factor in the RBA’s decision to go ahead with a rate cut. Another weak report in May would increase speculation of more cuts to come, whereas an improvement in the labour market may see investors paring back their expectations. 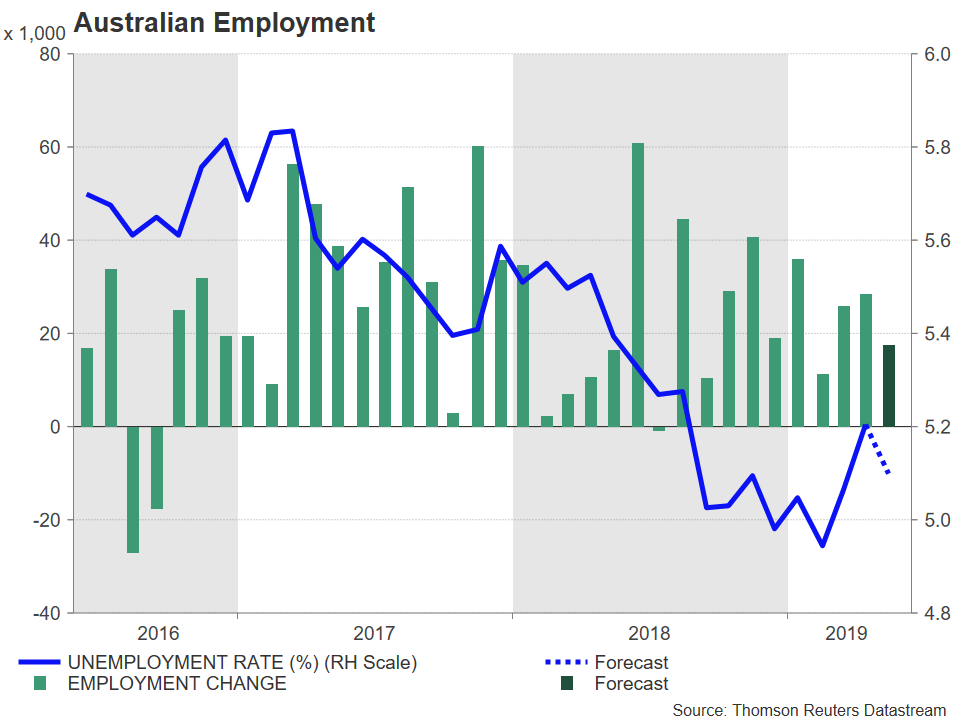 Chinese data will also be highly significant for the aussie given that China is the biggest buyer of Australian exports. Trade figures are out on Monday and economists are forecasting a second straight month of an annual drop in exports in May. On Wednesday, the producer and consumer price indices will be published for May, and rounding up the week on Friday are industrial output, retail sales and fixed-asset investment.

Growth in industrial production and retail sales are projected to have accelerated in May from an unexpectedly bad April. Market sentiment will be especially sensitive to the export and industrial output numbers as very poor readings in these barometers would heighten worries about slowing growth in the world’s second largest economy. 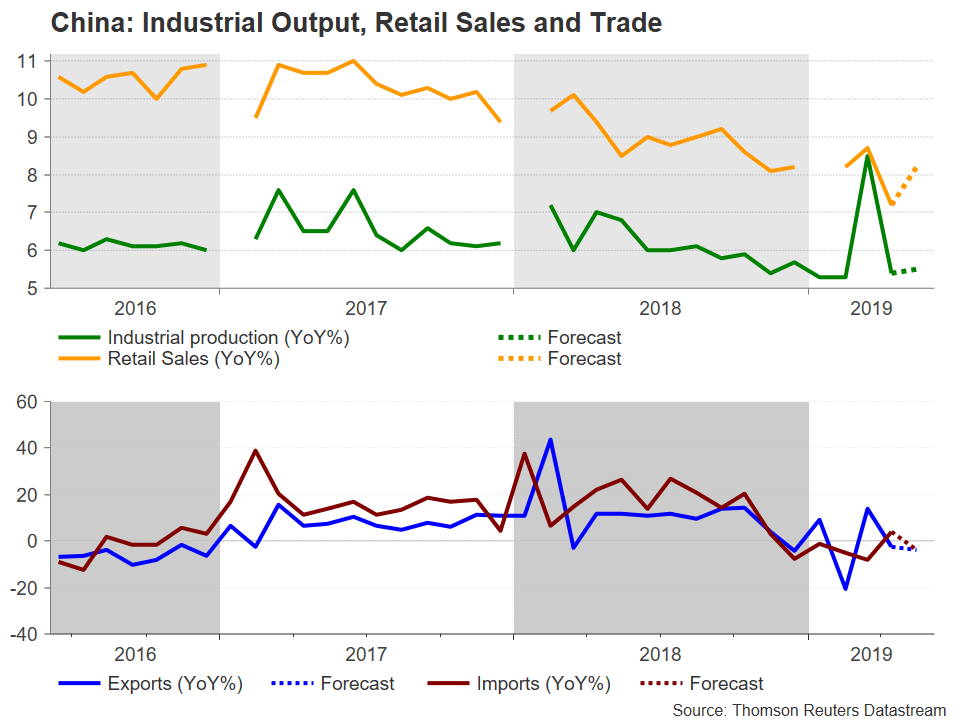 Japanese data not expected to be game changer for yen

As the yen approaches the highs it scaled during the flash crash of early January, the moves are sure to be raising eyebrows at the Bank of Japan. But with limited tools available at the BoJ’s disposal, next week’s figures are not expected to prompt policymakers into action just yet.

Revised GDP estimates for the first quarter are due on Monday, to be followed by corporate goods prices and machinery orders for May on Wednesday. Machinery orders – seen as a good indicator for future capital spending – has been declining year-on-year during the first quarter. A negative reading for April as well would signal Japanese businesses continue to see weak demand for their goods.

There’s not going to be much of interest for traders on the European calendar next week but that’s not to say the euro will be out of the spotlight as headlines about Italy have the potential to generate considerable volatility for the single currency. So far, there’s only been a cautious response by the markets to news that the European Commission has begun disciplinary action against Italy over excessive debt. The euro and Italian government bond prices could come under pressure if Italy’s coalition partners take a confrontational approach to the EU’s decision, or, infighting on how to deal with the country’s economic troubles leads to the resignation of the prime minister, Guiseppe Conte.

Also impacting the euro will be the Swiss National Bank’s policy decision on Thursday. The SNB is expected to hold interest rates unchanged in negative territory but could signal looser policy as a risk-off driven strong currency and global trade tensions threaten to derail Switzerland’s growth rebound enjoyed in the first quarter. SNB Chairman Thomas Jordan will probably also reiterate the central bank’s willingness to intervene in foreign exchange markets to keep the Swiss franc down. Policymakers are unlikely to be happy about the franc’s appreciation to 22-month highs versus the euro this week and euro/franc could face a sell-off if Jordan issues a strongly worded statement on the exchange rate. 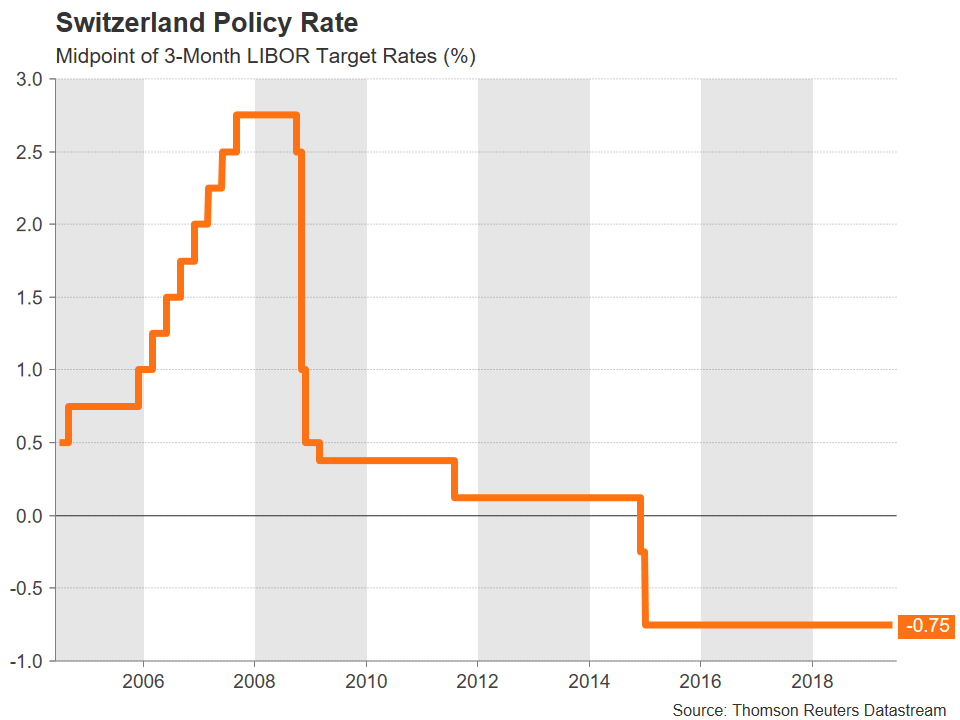 Plenty of UK data but focus on Tory leadership race

The race on who will replace Theresa May as Conservative party leader and as prime minister is well and truly underway and the first ballot to trim down the long list of candidates will take place on June 13. Thus, amidst all the political headlines, next week’s numbers from the UK could merely act as a distraction for the pound.

Still, investors will be keeping an eye on key monthly stats for possible signs UK growth could be faltering. Manufacturing output was boosted in March due to businesses stockpiling on fears of a hard Brexit. But with the Brexit deadline now pushed back until at least October 31, production likely fell back significantly in April. 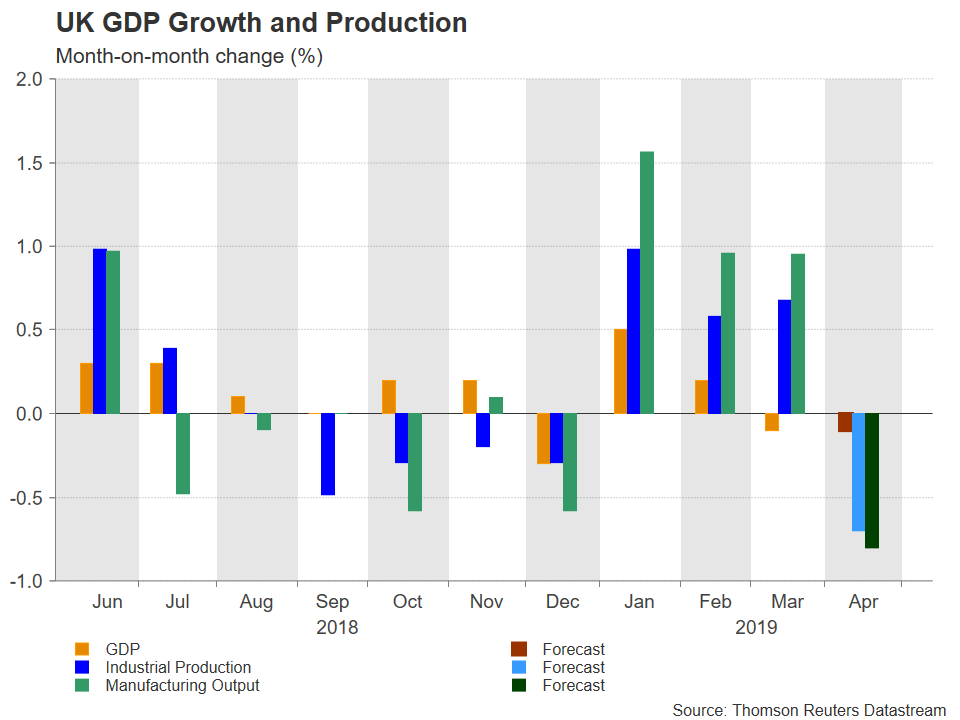 The services sector on the other hand is expected to have bounced back in April after being weighed by the Brexit turmoil in March. However, this probably wasn’t enough to lift the month-on-month GDP change to positive from -0.1% in March. The GDP and industrial/manufacturing output numbers will be released on Monday, along with April trade data. The latest employment report will follow on Tuesday where the focal point will be the pace of jobs and wage growth, as a tight labour market is essential to sustain domestic consumption in the UK against the backdrop of the Brexit uncertainty and sluggish overseas demand.

Inflation and retail sales to be watched in the US

As traders speculate when a Fed rate cut will arrive, there should be plenty of clues from next week’s data out of the US. The JOLTS job openings for April will kick off the week on Monday and May producer prices will follow on Tuesday. Next up, and likely to attract more attention, will be CPI numbers on Wednesday. Annual inflation, according to the consumer price index, is forecast to ease back to 1.9% in May from 2.0% previously. The core rate is expected to remain unchanged at 2.1%. Although the Fed does not target CPI inflation, a decline in this measure would not bode well for the preferred PCE inflation, which is even lower than the CPI rate.

The other highlight in the US will be Friday’s retail sales figures. Retail sales are expected to have increased by 0.6% m/m in May, which would suggest US consumer spending is holding up in what would be a healthy sign for Q2 growth. Also due on Friday are May industrial production figures and the University of Michigan’s preliminary print of the consumer sentiment index for June. 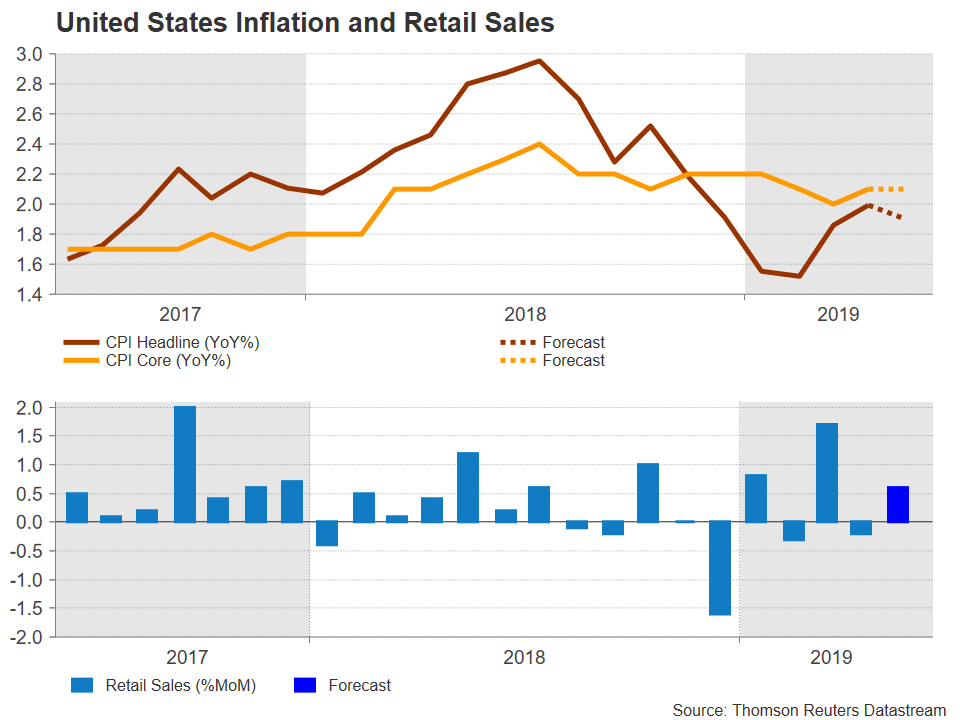 With recent data out of the US looking mixed, more of the same next week could help the sliding US dollar find a floor as this would indicate the American economy is nowhere near the doom and gloom that would cause the Fed to cut rates multiple times in the next 12 months, as is being predicted by the markets. However, any worrying numbers could fuel rate cut bets even more, pushing the greenback to new lows versus its peers, particularly the yen.