Economic releases will be somewhat sparser in the coming week but there will be several key data to keep an eye on as well as central bank activity that could shape expectations of future monetary policy. The Bank of Canada meets for its latest policy decision and will probably resist making a dovish tilt, while the minutes of the Federal Reserve’s and the European Central Bank’s last policy meetings will be watched for clues on their upcoming decisions later this month.

As US and Chinese officials make preparations to restart trade talks, trade numbers out of China on Friday will come under the spotlight amid signs the world’s second largest economy may require further stimulus to stave off a deep slowdown. Chinese exports unexpectedly rose by 1.1% year-on-year in May, though this was mostly due to the frontloading of shipments from the latest round of tariffs imposed by the United States. They are forecast to have declined by 2% y/y in June. A bigger drop would accentuate worries about the economy and add to calls for more policy easing. 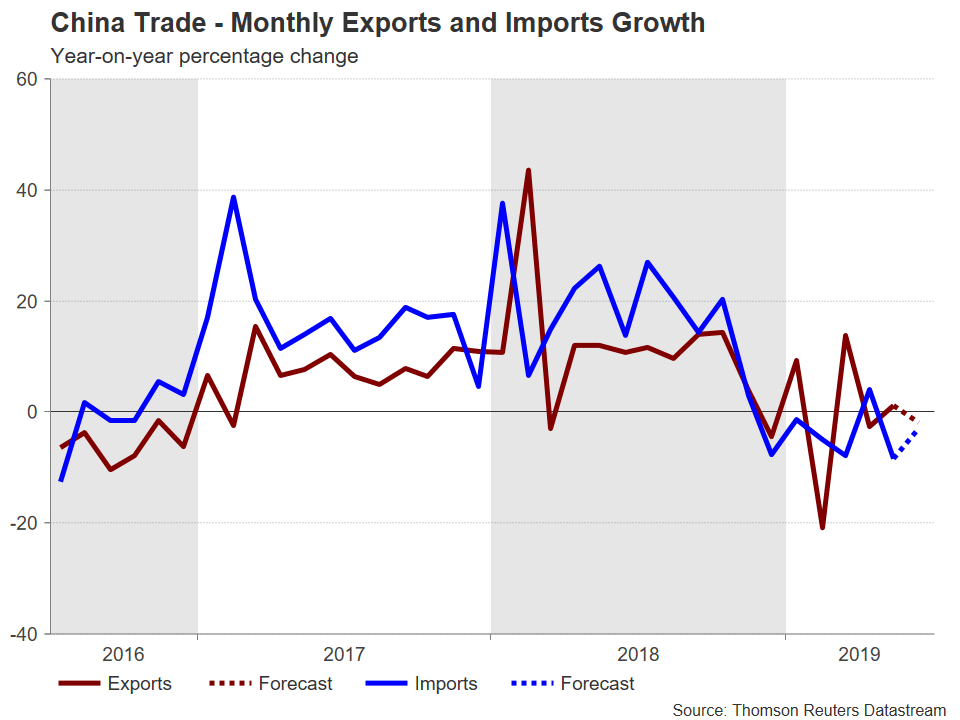 A disappointing set of figures could pressure the yuan a little but not so much the Australian dollar – often seen as a better liquid proxy for the yuan as China is the main destination for Australian exports. The aussie has been benefiting from higher iron ore prices and narrowing negative spreads between Australian and US yields so is likely to hold firm unless China’s trade stats cause a major deterioration in risk sentiment.

Machinery orders coming up in Japan

Machinery orders will be the main release in Japan, which will kick off the week on Monday. Despite the ongoing trade uncertainty and weakening overseas demand, Japanese machinery orders were up for the third straight month in April. Industrial production has also steadied after plunging in January. The final reading for industrial output in May is out on Friday and before that, corporate goods prices will be viewed on Wednesday. 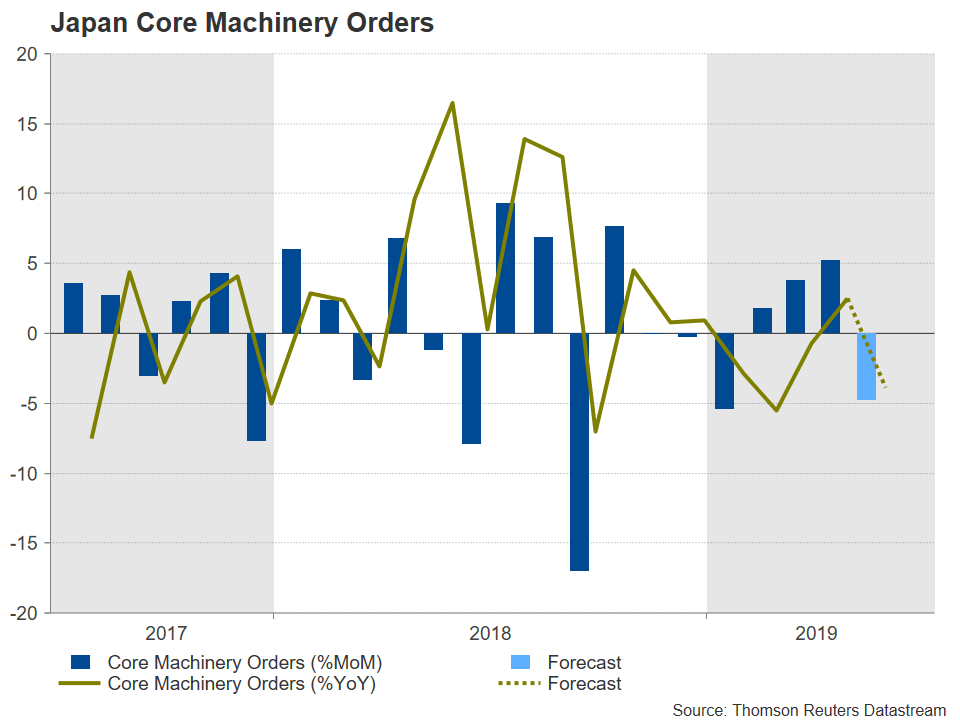 The not-so-gloomy economic picture in Japan probably explains why the Bank of Japan is not in any hurry yet to join its counterparts in signalling looser policy. One area of concern, though, for the BoJ is the deterioration in earnings, which have been falling throughout 2019. The May figure is out on Tuesday and another annual drop would not bode well for consumer demand, hence, growth.

But until the BoJ sends out explicit signals of policy easing, the yen will likely continue to appreciate against its peers as most other central banks move towards or have moved in cutting rates.

Apart from industrial output numbers, the European calendar will be relatively light next week, putting the focus on the ECB’s June meeting minutes. At the start of the week, the market’s attention will fall on the German economy as industrial output and trade data will be released on Monday. The Eurozone-wide industrial production figures will follow on Friday. 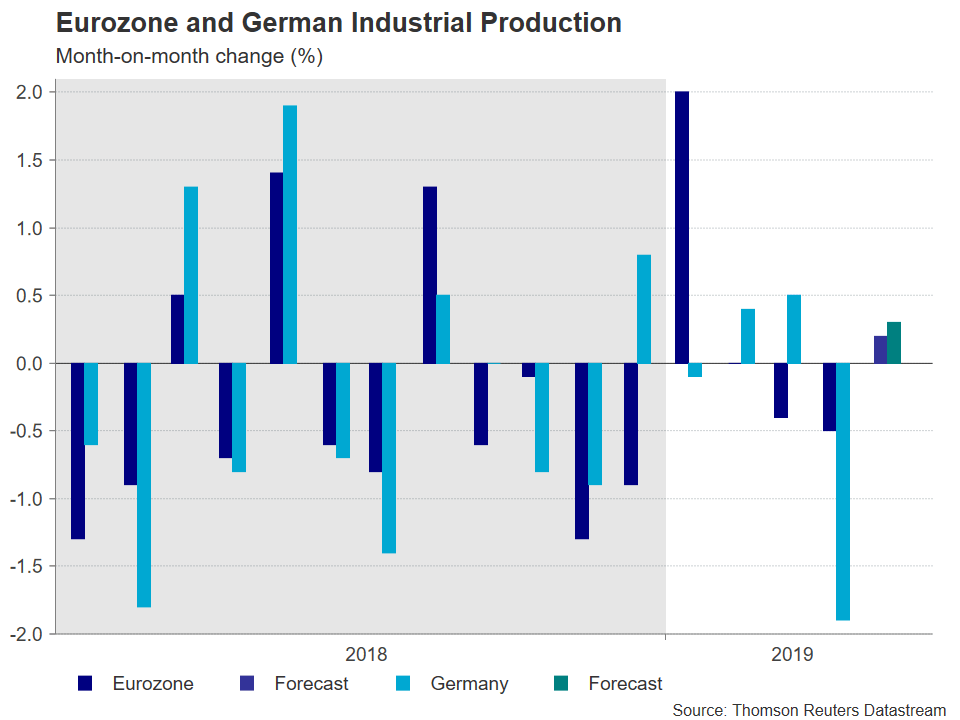 The bloc’s manufacturing sector, particularly Germany’s, continues to struggle as trade tensions weigh on business investment and disrupt global supply chains. And with the Trump administration seeking to expand the trade fight to more countries, including the European Union, instead of looking to end it, the Eurozone’s outlook has grown dimmer. This has forced the ECB to rethink its policy normalization plans as inflation has also moderated.

At the June meeting, the ECB refrained from adopting a clear loosening bias even though President Draghi did say some members raised the possibility of a rate cut. The account of that meeting, to be published on Thursday, should provide some insight into those discussions. Although there have been several signals since the June meeting, including from Draghi himself, that additional stimulus may be on the cards, a dovish account could still pressure the euro, which this week slipped back below $1.13 on declining Eurozone bond yields.

UK May data could point to Q2 contraction

The UK’s growth outlook is not looking any better either lately and the economy probably underperformed its European partners in the second quarter as the Brexit extension has only prolonged the period of uncertainty for British businesses. UK GDP shrank by 0.4% month-on-month in April and data due on Wednesday is forecast to show GDP recovering by 0.3% in May. Both industrial and manufacturing output also slumped in April as firms sought to run down the large stockpiles they built in the prior month. In May, they’re expected to have rebounded by 1.5% and 2.5% m/m, respectively. 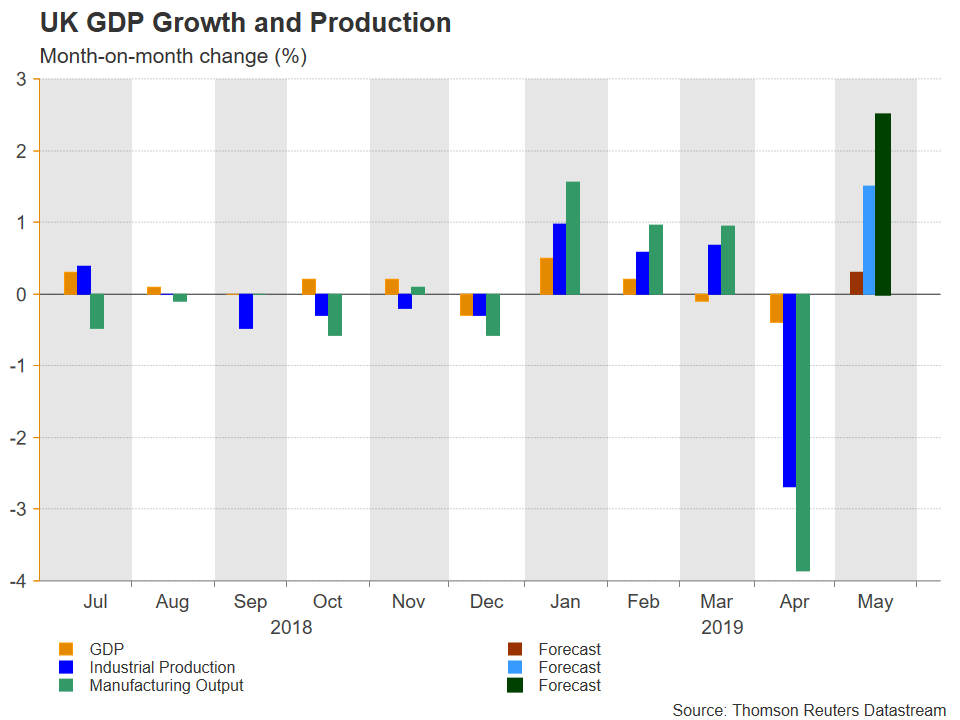 If the numbers indicate the UK economy likely contracted in the second quarter, this would further hinder the Bank of England’s intension to raise interest rates in the next 12 months even if there is a smooth Brexit. Markets already think the next move will be down, having priced in a more than 50% probability of a cut by December.

Sterling could struggle to hold above key support at the $1.25 level if next week’s releases further raise the odds of a BoE rate cut by year end.

FOMC minutes and June CPI to be US highlights

As investors digest the mixed data on the US economy from the past week, attention will move onto the latest consumer and producer prices, as well as the minutes of the Fed’s June policy meeting. The 12-month CPI rate, out on Thursday, is expected to have dropped by 0.1 percentage points to 1.7% in June. Producer prices for the same month will follow on Friday.

While the CPI numbers are not anticipated to be of much significance to investors’ pricing of a rate reduction by the Fed at the end of this month, weaker-than-expected figures would only reinforce the view that the US central bank will ease policy and this would keep the US dollar on the backfoot.

More important for the dollar, though, will be Wednesday’s FOMC minutes of the June meeting. The June dot plot chart saw a major shift in FOMC members’ forecasts of the rate path, but the median projection was for rates to stay on hold for the rest of 2019. The minutes could reveal how close 9 of the 17 FOMC members who didn’t predict a rate cut were to changing their inclination.

Bank of Canada to stand pat

Things have perked up lately for the Canadian economy as inflation has overshot expectations and GDP growth has accelerated. Higher oil prices have also improved Canada’s growth prospects as well as the Canadian dollar’s. Normally, the Bank of Canada would not have hesitated to hike rates under such conditions. However, with the global economy slowing down and other central banks switching to a dovish stance, the BoC will probably decide to hold monetary policy steady for the time being. 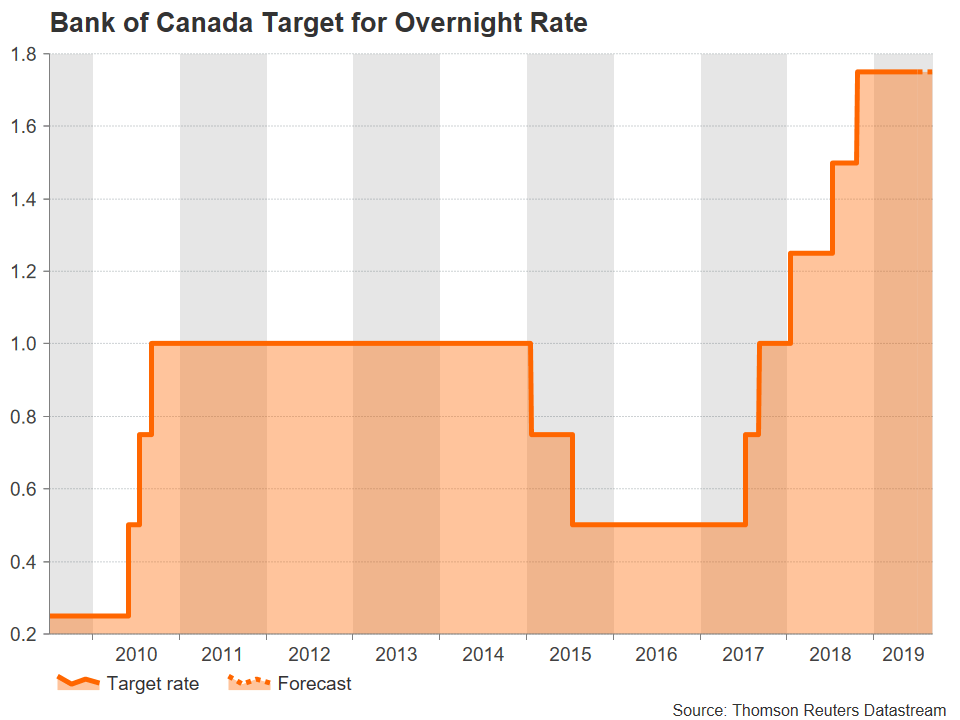 The Bank is widely anticipated to keep rates at 1.75% at it’s meeting on Wednesday and futures markets see only about a 20% probability of lower rates by December. With the Bank’s announcement statement not expected to give much away, investors will be looking at Stephen Poloz’s press conference and the quarterly Monetary Policy Report for more clues on what direction the BoC will take in the coming months.

In the meantime, the greenback’s declining yield advantage has driven the loonie to eight-month highs as interest rates in the US could soon fall below those in Canada.