We have some FX-relevant information today but it remains to be seen whether the prospect of war trumps everything. First up is the ISM PMI, forecast to show improvement to 49 from 48.1, but leaving it under the boom-bust line all the same. We also get the Fed minutes from Dec 11, ho hum. At the time we thought the Fed was talking too much about inflation and how much it would take to get a hike, which seemed out of place under the circumstances. Now it looks positively Cassandrian. War, if war is what we get, is inflationary. Oil has already moved up.

We can hope that Powell tells Trump to his face that if he continues on a war-like path, he will lose his low interest rates and falling dollar.

Unless something else comes along, we could be in for a war far more serious than Iraq. Iran is a far bigger and more advanced country than Iraq, proud of its history and heritage, and almost unwavering in religious ideology and opposition to all things socially modern and American.  According to the NYT, Suleimani “changed the shape of the Syrian civil war and tightened Iran’s grip on Iraq. He was behind hundreds of American deaths in Iraq and waves of militia attacks against Israel. And for two decades, his every move lit up the communications networks — and fed the obsessions — of intelligence operatives across the Middle East.”

For the US to target a foreign leader for assassination, and by a drone, is a Big Deal. “… his death is now likely to prove central to a new chapter of geopolitical tension across the region.” Note that the NYT uses a “u” in the general’s name and the WSJ and Bloomberg use an “o.” Confusion over spelling is rife. Is it Kiev or Kyiv?

The fate of the dollar and the safe-haven currencies is in the White House and Pentagon hands. It’s a little weird that the yen is the outperformer, compared to the classic safe-haven Swissie. Some may say that the European currencies will suffer the most, because they are within shooting distance of Iran, but that’s not how they think in Iran. The US killed their guy, the US is the target. Ally Israel is actually the closest target to Iran. And gee, do you think Trump still wants to pull out of Nato?

Glancing at newspaper front pages and summary notes from news agencies is likely misleading. The potential for a hot war between the US and Iran is all too real, and the single most important item in the world today for all markets. We hereby withdraw our forecast of the dollar downward slide. War and the threat of war always favor the dollar. 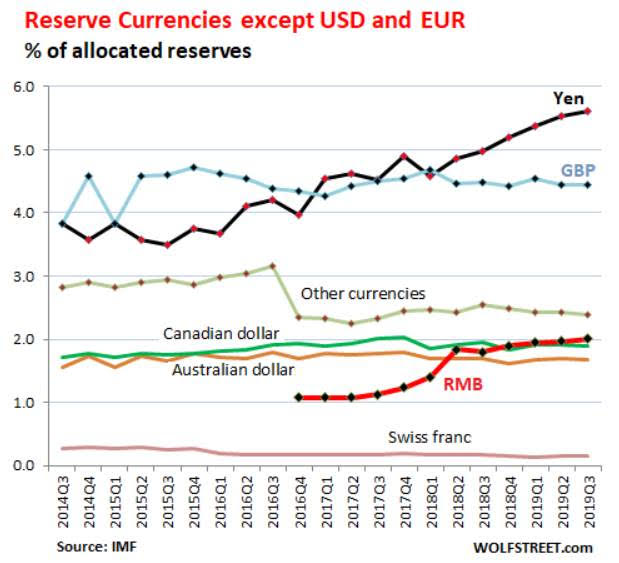 Tidbit: The IMF released its reserve report a few days ago. The dollar is losing ground from 66% of the world’s reserves in 2014 to 61.8% at the latest reading. So what? So nothing. This is not a piece of data that moves markets. It barely gets the attention of economists. See the longer-term chart from Wolfstreet. “Over the long term, the recent moves in the dollar’s share are relatively small. There have been huge moves from 1977 through 1991, when the dollar’s share plunged from 85% to 46%, and then huge moves as the share rose again to 70% by 2000.” Note that when the euro arrived, the US share of reserves slipped, but only a little. Evidently confidence in the eurozone as an institution failed to deliver the goods.

Besides, other reserve currencies lost share, too. What won? See the third chart. The winners are the yen and pound, but by fractional amounts. What did not win is the Chinese renminbi, although it now has a bigger share than Canada. Considering the relative size of the two economies, this is not a slur on Canada.

Not to be tiresome, but let’s not forget that countries save reserves in order to be able to buy food or weapons on short notice in an emergency. A reserve currency must be liquid above all else—immediately available. The euro is certainly very liquid but consider the totally screwed up eurozone bond market—still not an integrated entity. A country could hold reserves in cash, but getting some interest would be nice and may even be a legal requirement. And all the European bonds have a negative return. So, bottom line, don’t pay attention to any doom and gloom stories about the dollar losing its position as the world’s reserve currency. Most of us will be pushing up daisies before anyone needs to worry about it.