Another week nearly passed us then and as we write late into the session on Friday the week is ending with a decidedly negative tone. September has not been as rosy as the summer months for equities and headwinds continue to arise. Now that we have tired of delta and tapering it is Evrgrande and Chinese tech that is keeping investors awake at night. The Evergrange crisis is certainly alarming and does have worrying parrels to Lehman Brother. Evergrande, for those not in the know, is a huge Chinese property developer which is on the verge of bankruptcy and so defaulting on its debt. So what you say it is China. Well, the world is ever more interconnected these days and the Chinese economy is growing to rival that of the US. Evergrande is hugely interconnected in the Chinese economy so there are fears of contagion if it goes bankrupt as credit will likely immediately seize up in the event of a default. China can not afford this so investors have been assuming that China will not let it go bust. However, now it appears that China will step in but not with an unlimited backstop. China may want to take some steps but not let investors totally off the hook. Asian markets have not been performing well and with the already known worries over Chinese regulatory crackdowns on the tech space it all makes for some interesting times to be exposed to China-related equities.

Moving back west to the US and the latest sentiment readings from the American Association of Individual Investors (AAII) has garnered some attention as the reading sees bulls drop sharply by over 16%. The lowest reading for bulls in quite a while.

Despite this, the slow and steady grind higher that we have witnessed for much of the summer remains the trade that frustrates the masses so this trend could continue. JPM notes that it expects the S&P 500 to top 5,000 next year on the back of strong buybacks, central bank policies, and interestingly JPM is not worried about changes to corporate tax which have been on the Democratic agenda. JPM also ups Earnings Per Share (EPS) numbers for next year and are above consensus from the Street.

Next week will be a test of sentiment now that quadruple witching is behind us. The expiration at the close today of single stock futures and options and index futures and options always leads to a few unusual moves (witness Tesla on the open on Monday) but can lead to a volume lull the week after. Bears finally have a chance but with the wall of money from Central Banks and buybacks, it will not be easy so we remain bullish equities into year-end. But we have taken a more selective view with worries over tech from China.

Speaking of that wall of money and the latest fund flow data from Refinitiv Lipper Alpha shows net inflows again for equity funds up to September 15. Net equity inflows of $5.9 billion for the week despite the Nasdaq, Dow, and S&P all being down nearly three-quarters of a percent. Equity Exchange Traded Funds (ETF's) took in over $10 billion for the week with SPY the biggest winner in terms of flows. The unloved Russell 2000 (IWM) was the biggest outflow.

The chart makes for tough reading if you are a bull with the Relative Strength Index (RSI) below 50 and trending lower and the Moving Average Convergence Divergence (MACD) widening. We had mentioned previously that $447 was important and below things would turn bearish short term. Now support from the trendline is in sight at $439 but we prefer to catch the falling knife a bit lower down at the $420 zone. Here we can see a nice volume profile support and the support lows from June and July at $415 and $423 respectively. 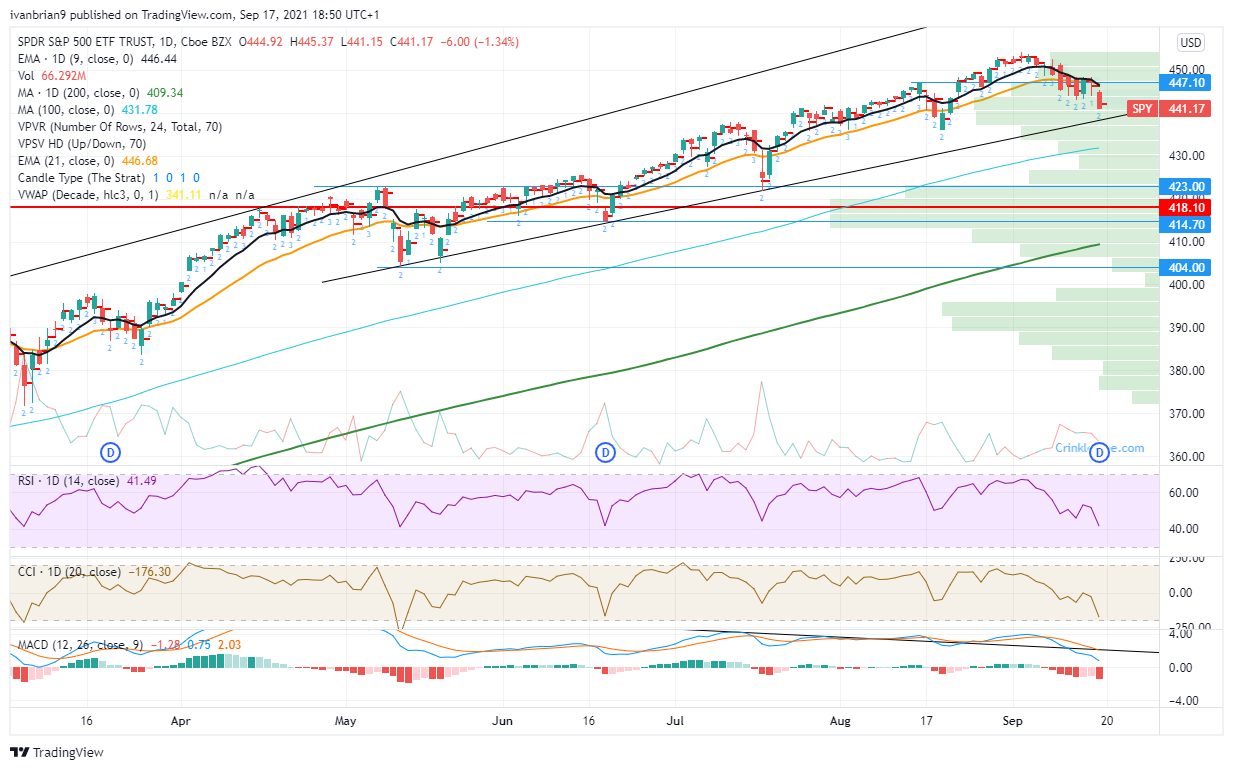 Strong support at $367 with the point of control and the sideways consolidation from July August at this level. This should at least slow any falls if not provide the entry point for a buy the dip. Once under $360 then things may get shorty as volume is thin, a move quickly to $340 would be on the cards. 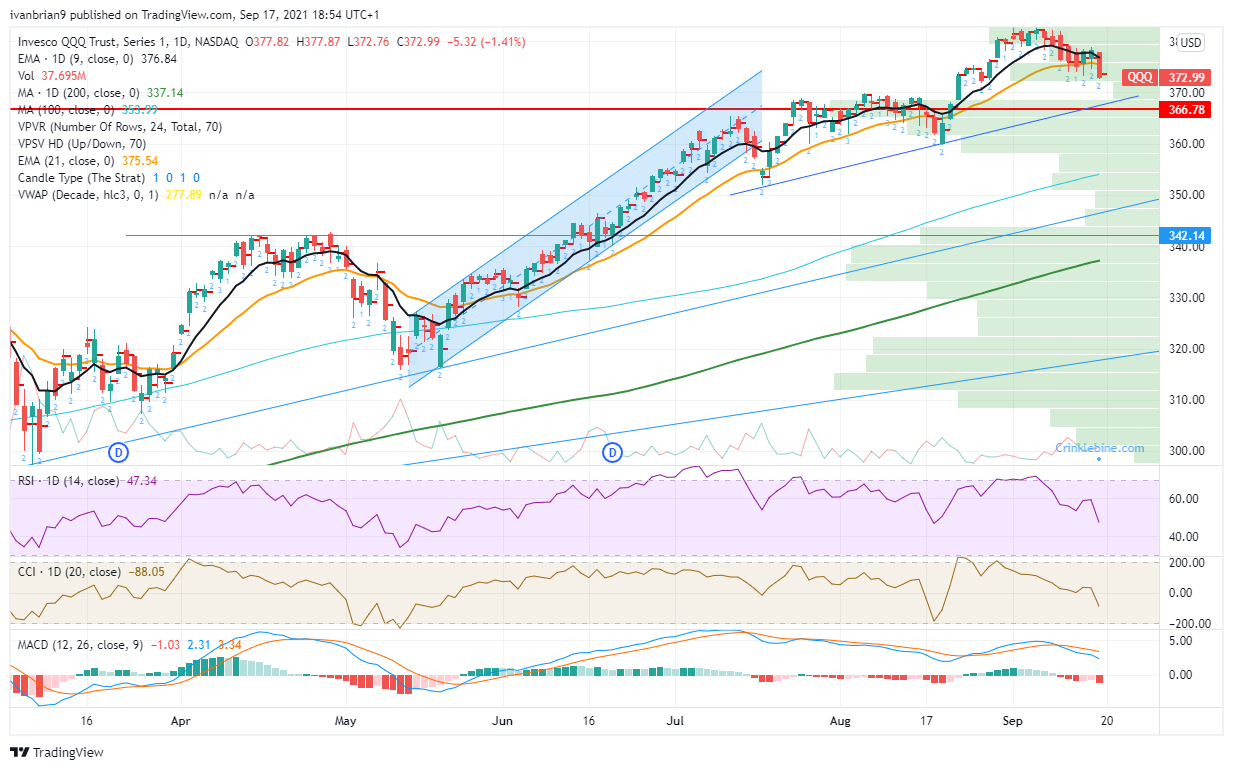 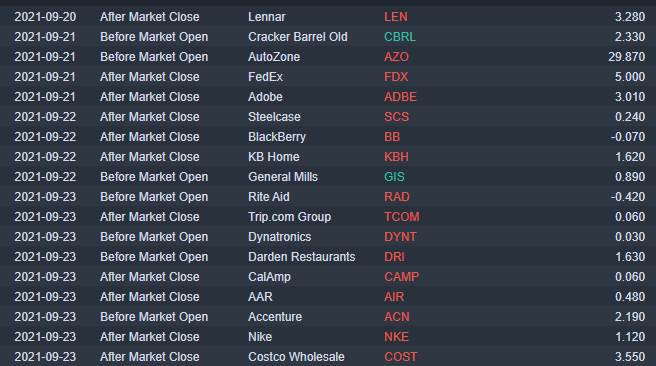 Some retail favorites in there such as Blackberry (BB) and Trip.com (TCOM) earnings season hots up nicely later in the week with some retail data from Nike (NKE) and Costco (COST).

Not the most exciting week on the data front but at least the Fed interest rate decision, well the commentary, might provide some volatility. 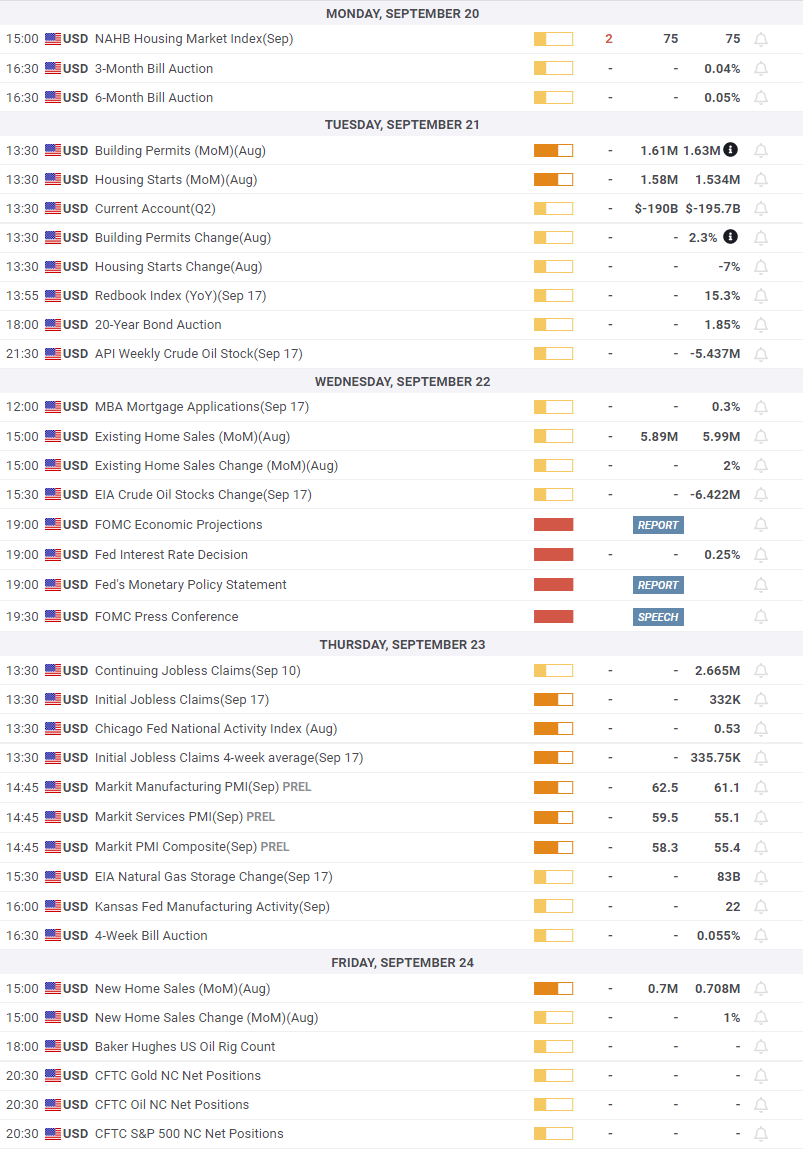