A topsy turvy week with a shocking opener on Monday leading to some stabilization on Tuesday ahead of the Fed. The Fed played its hand well and we welcomed a Wednesday rally with more gains on Thursday and now a flat Friday. Equity investors are confusing themselves while bond traders know the only way is up. Yields are on the prowl again, just when we have started to discount that particular worry as yesterday's fear. The US yield curve has steepened and the 10-year yield has made its biggest move this week for some time. Witness the chart below, we really should have seen this one earlier but look at that bullish divergence on the Relative Strength Index (RSI). Now yields have broken out, where to next? Not good for equities is the likely answer. This week alone we had results from Nike (NKE), Costco (COST) and General Mills (GIS) and all warned of supply chain issues and rising costs. Companies do not generally keep those rising costs to themselves, they get passed right on to you and me thank you very much. The Fed is likely to be forced to act and at their midweek meeting, they did make a somewhat surprising reference to rate hikes sooner in 2022 than anticipated but still refused to say when they were turning on the taper tap. 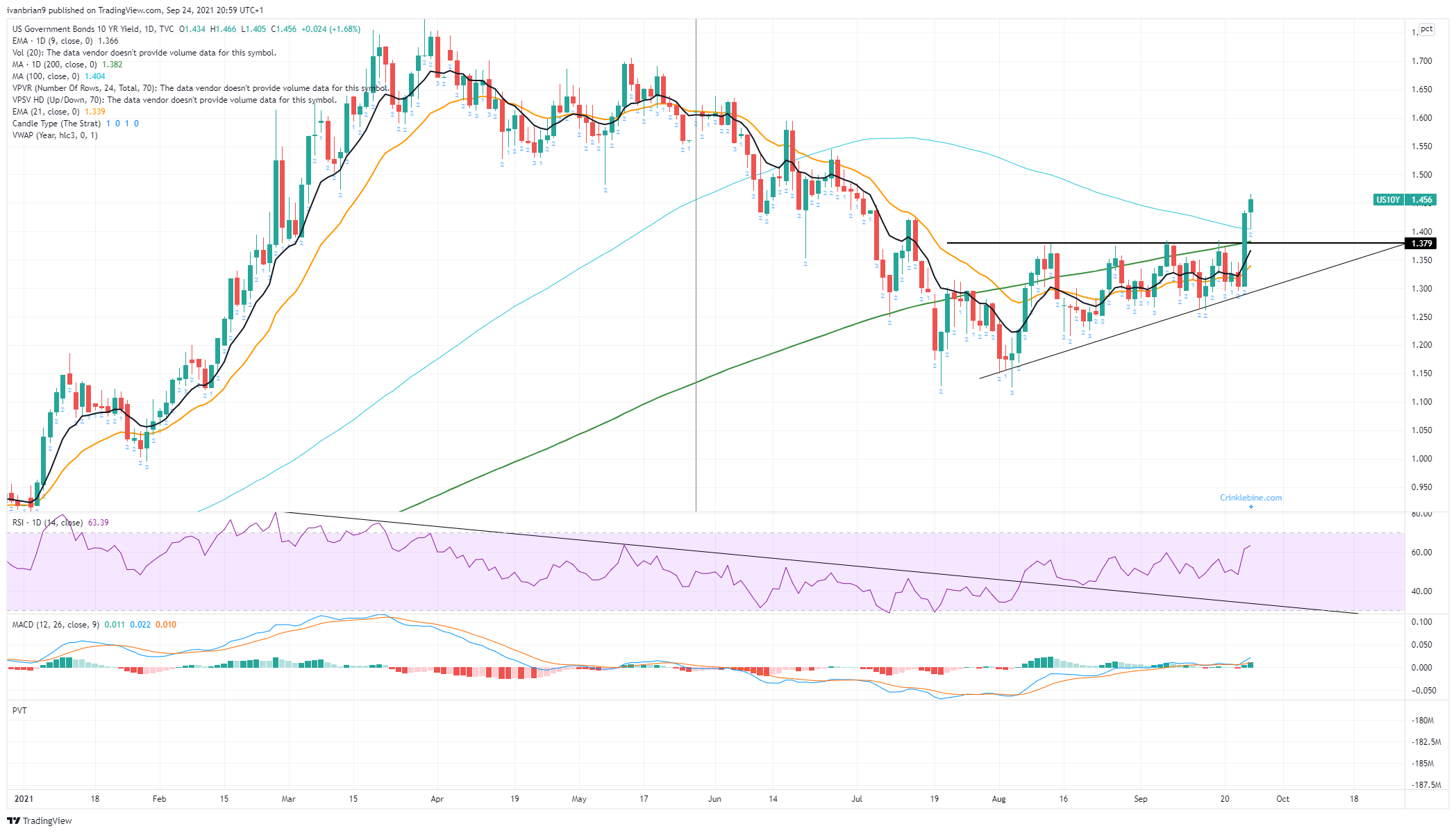 Evergrande is a cautionary tale for bond investors as it would now appear likely from reports that the troubled Chinese real estate behemoth has not paid overseas interest due yesterday. Technically a default does not occur until 30 days have passed so the clock is ticking but investors are growing increasingly wary. Investors are also unsure of the direct impact this will have with many citing Evergrande's $300 billion debt as comparable to Lehmans. But as we have mentioned before we think the spillover to global markets is unlikely. For starters, Lehman was more interconnected and caused the global shutdown of interbank liquidity which is necessary for the smooth flow of finance. Also while $300 billion is half the $600 billion debt attributed to Lehman, the US investment bank was the poster child for a much more endemic weakness, that of subprime debt being bundled together and sold as investment-grade debt. This is where the problem spread as previously investment-grade debt became junk or worthless. This is not likely the case with Evergrande.

But the fact remains the recent dip in the S&P is the first one this year that has broken below the previous dips. Before now we have always maintained the series of higher lows or dips but as our SPX chart below shows, this time it is different!

This deeper dip has also nicely correlated with a dip in fund flow data. The latest data from Refinitiv LipperAlpha to September 22 shows investors took $6.7 billion out of equity funds with the headline S&P 500 ETF (SPY) being the biggest loser, dropping $4 billion in net flows. 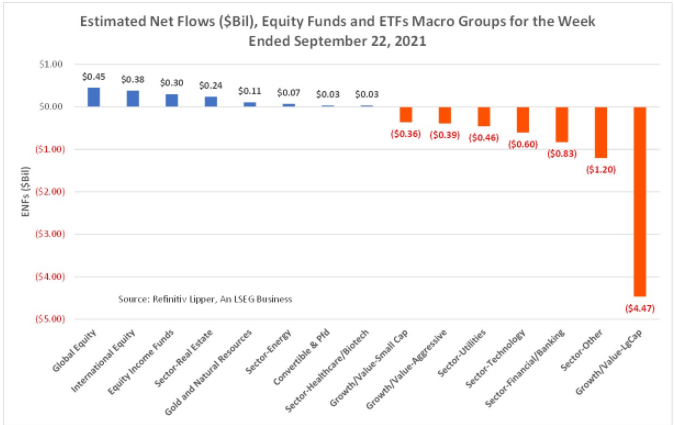 Now, how do we analyze this one? Well, let us take a step back a bit and look at the weekly chart. Since September 2020 we have traded in the wedge channel pattern and it was actually last week's move that took us out of this pattern. This week has merely confirmed that move. So clearly something has changed. 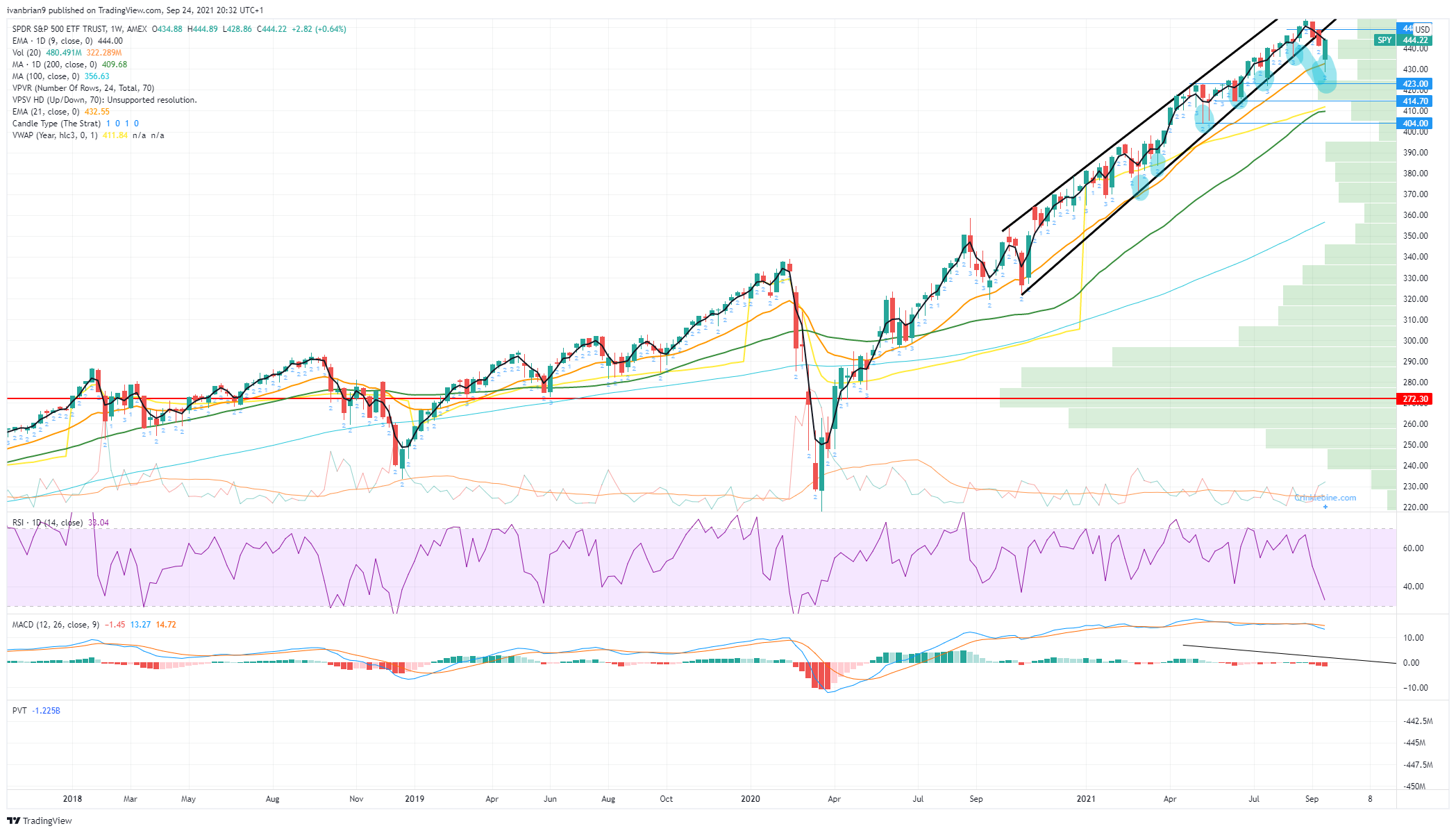 The downward trend in the number of stocks making 52-week highs (below) continues. 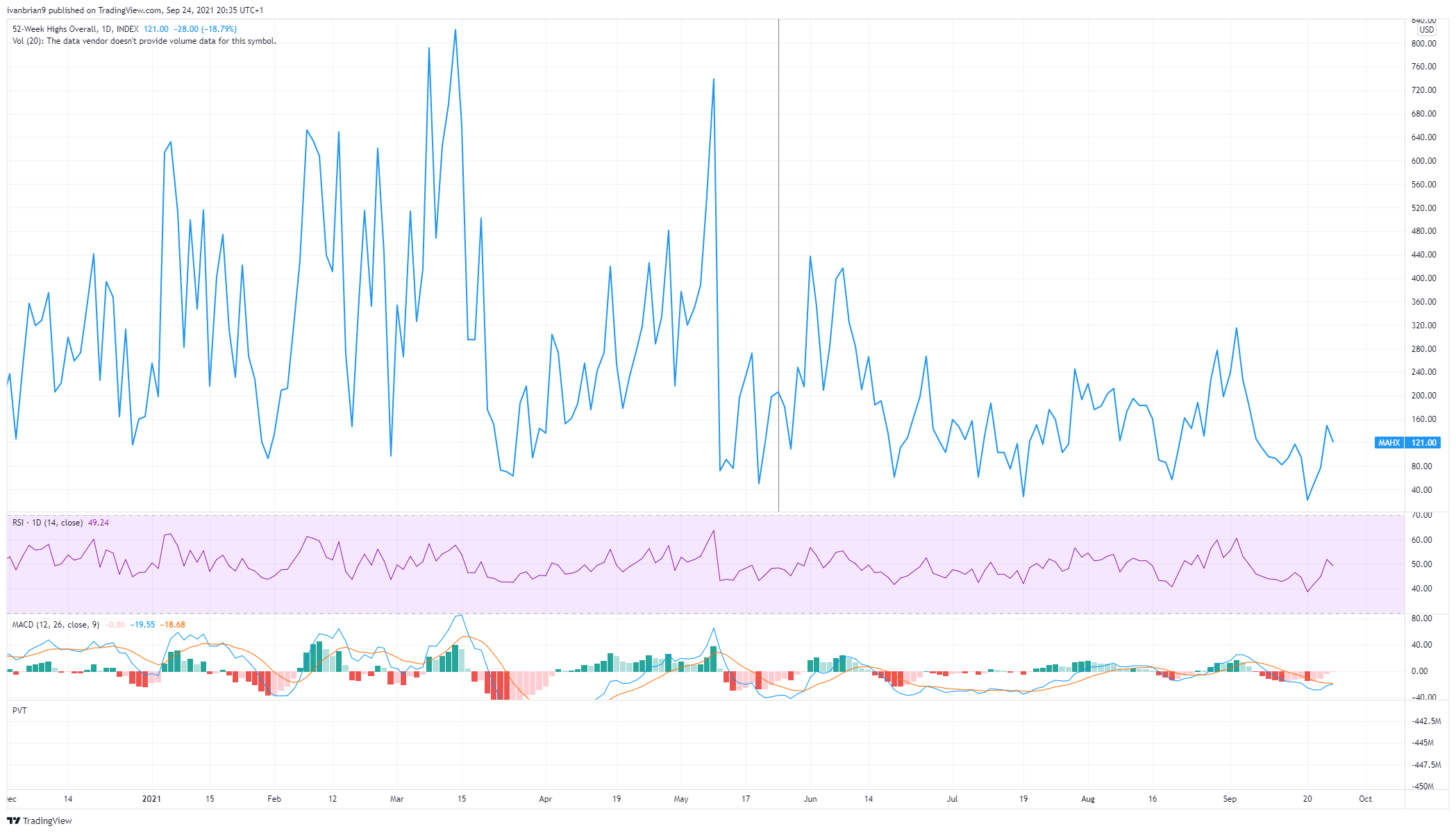 Even sharper is the decline in the number of stocks trading above their 200-day moving average. 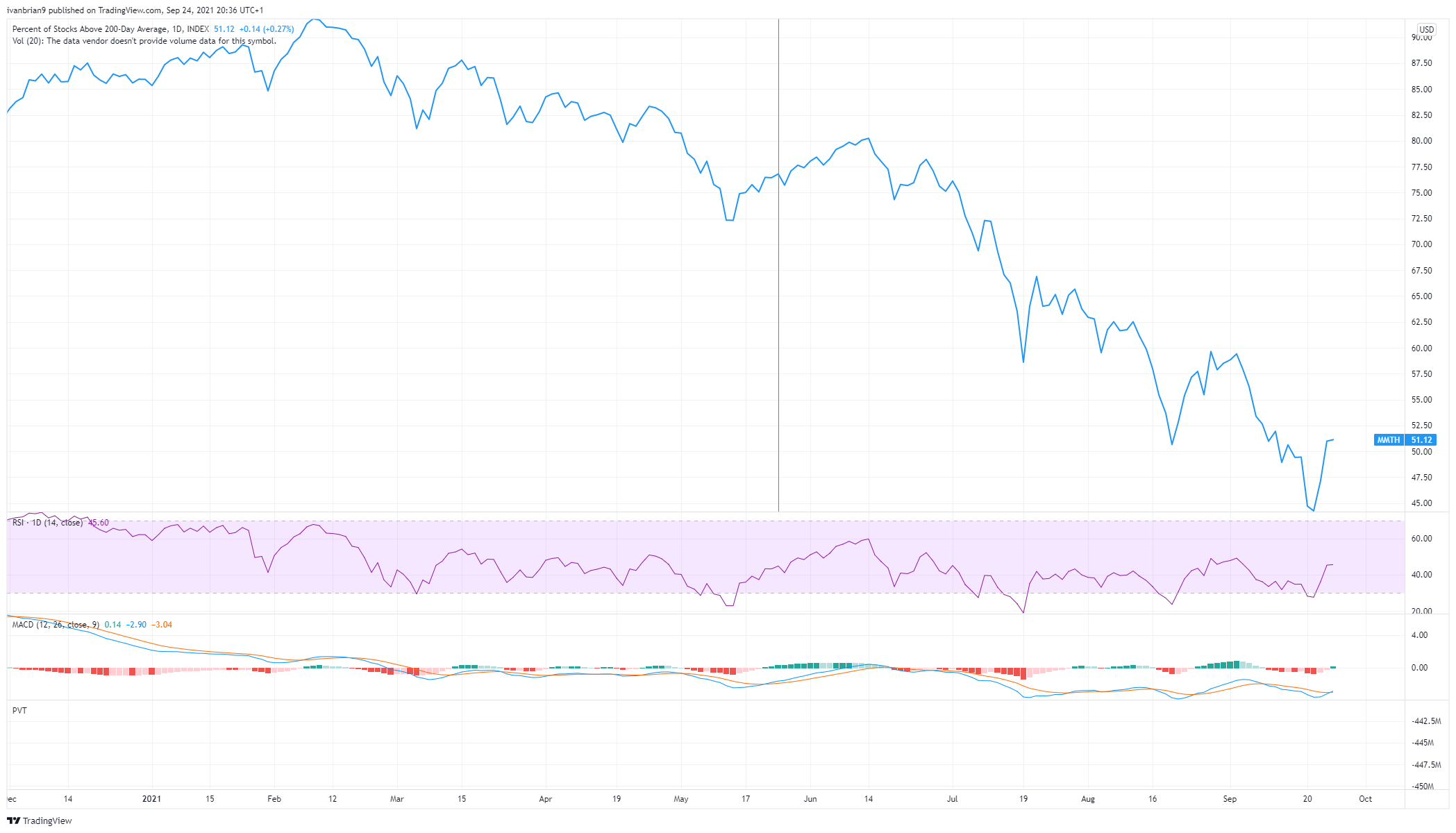 Friday's move has retraced the SPY to just above the 9-day moving average and the damage for the week is not as bad as initially feared. However, we remain bearish in our view unless $448.92 is broken. That level is last week's high. This late bounce to us looks like an opportunity to short. If you do, please use stops, always with the stops! 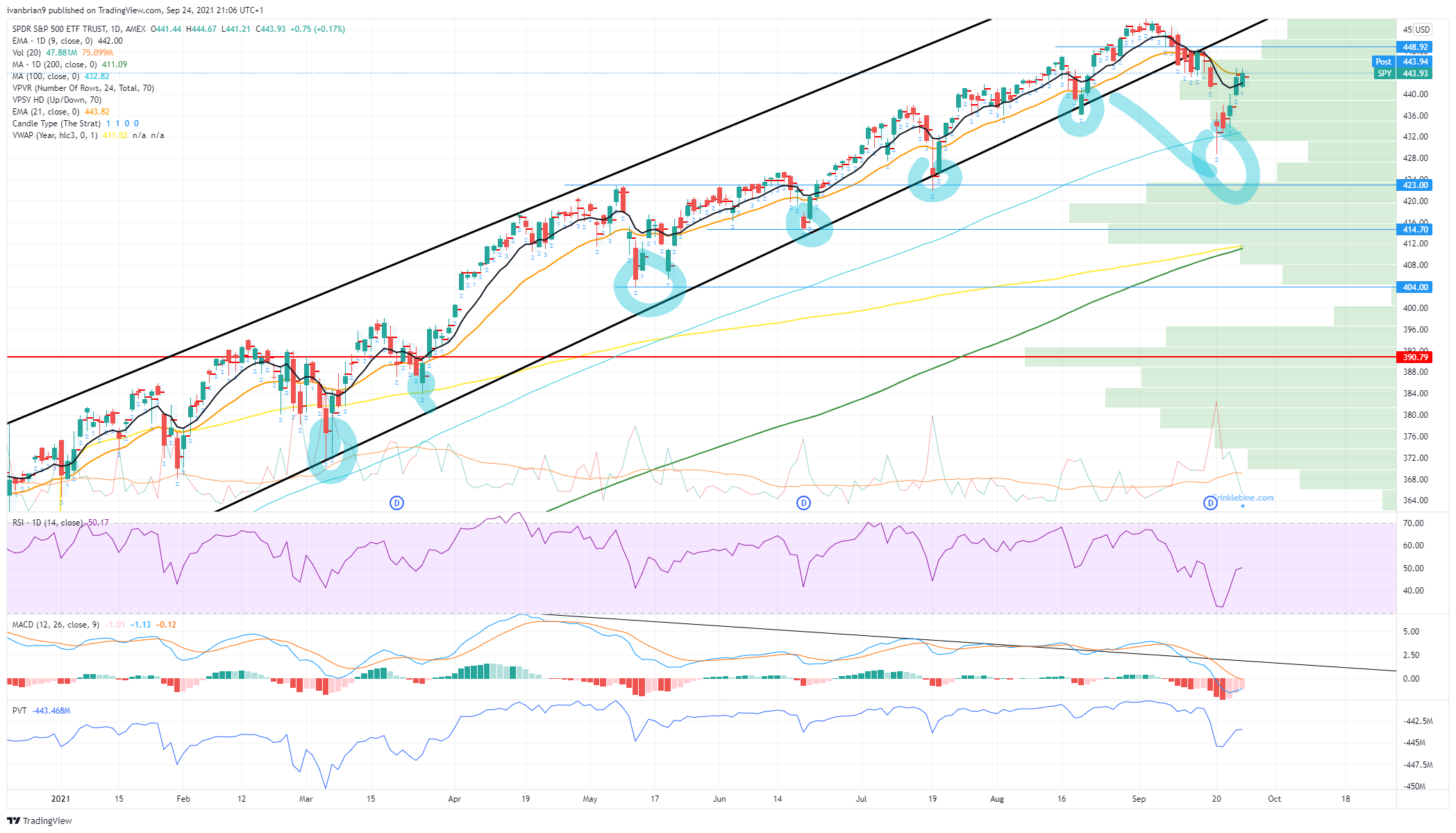 Last week we identified $367 as the point of control for the last quarter (price with the highest volume) and wanted $360 to hold. Well, this week's low was $361 from Monday and the bounce took us back to $373 and counting with the week nearly over. Not bad. We remain on watch for a break of $360 as volume is thin below meaning a potential price acceleration. $360 is also the last dip. We are bearish here too, only turning bullish on a break of $379. 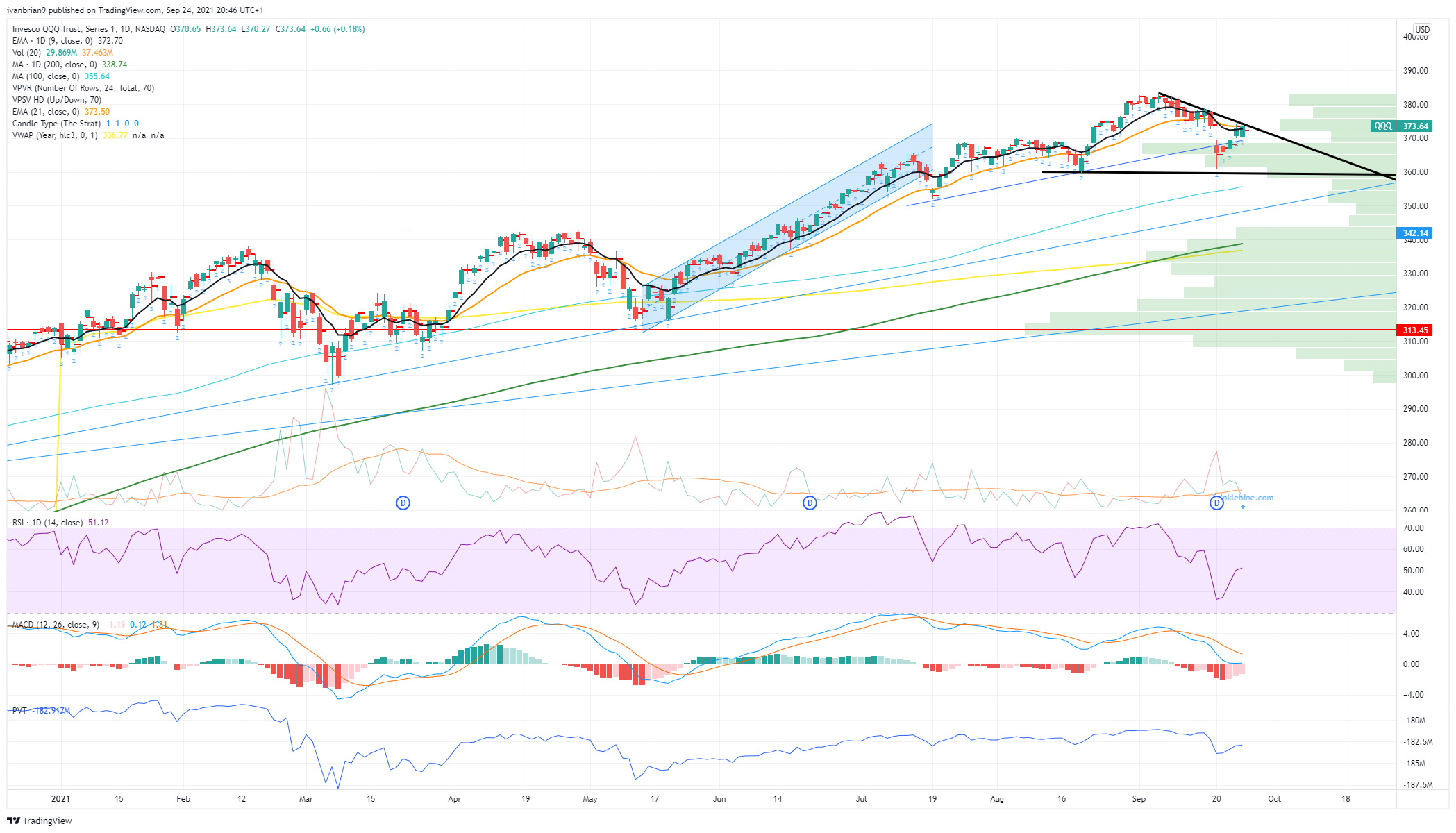 Not a huge amount on the earnings front. Some retail favourites such as Bed Bath and Beyond (BBBY) and Aurora Cannabis (ACB). 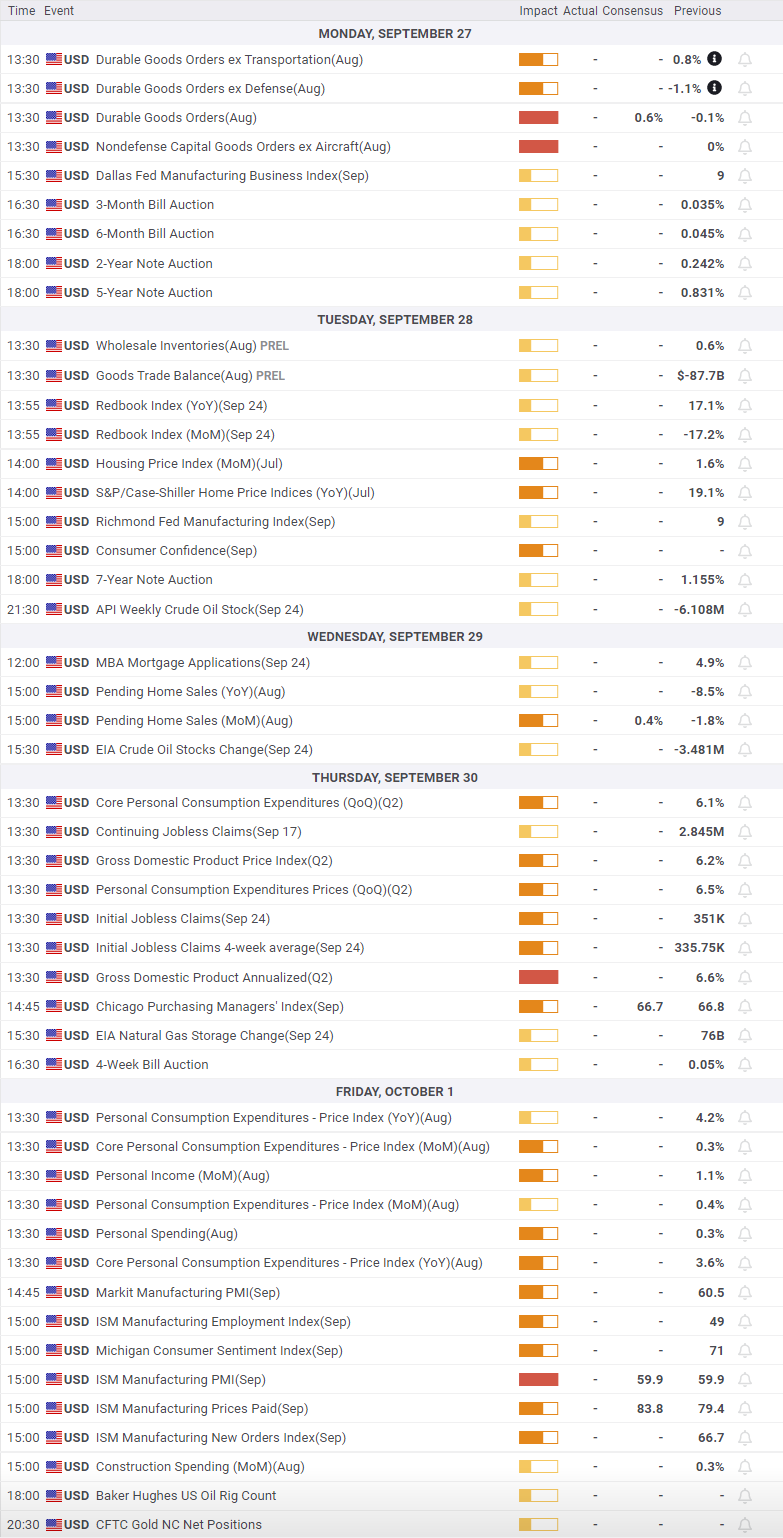