Powell is expected to confirm Fed’s view that interest rates will need to rise further, targeting the terminal rate, which is still undetermined as Fed revised higher its initial estimation of the highest rate.

Fresh strength emerges after a multiple failure to clearly break pivotal Fibo support at 138.62 (61.8% of 130.39/151.94 advance, adding to a bear-trap and also formation of a higher base on daily chart.

Technical studies show still fully bearish picture on daily chart, although 14-d momentum is in steep ascend but still in the negative territory. 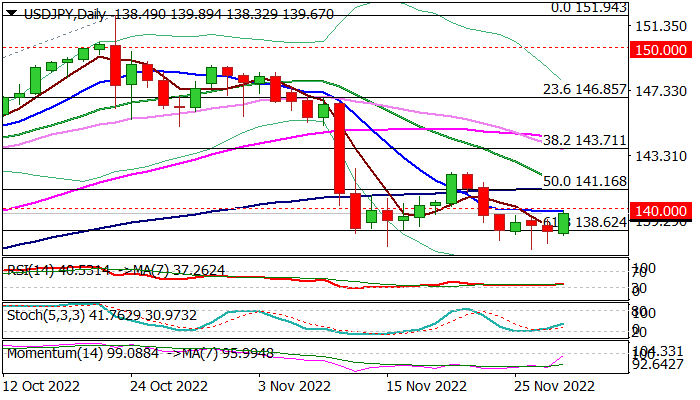 GBP/USD is easing toward 1.2350 in the European trading hours this 'Super Thursday'. Pound Sterling bulls take a breather ahead of the expected BoE 50 bps rate hike. The US Dollar pauses its decline, fuelled by the dovish Fed verdict.

EUR/USD is holding mild gains around 1.1000, as buyers keep the reins ahead of the ECB policy decision. The pair is sitting close to the highest level in 10 months, as the US Dollar licks the dovish Fed decision-inflicted wounds. The Euro remains underpinned by hawkish ECB expectations.

Gold juggles above $1,950 as risk-on mood loses momentum ahead of US NFP

Gold price is facing barricades in extending range towards the north as USD Index is attempting a cushion around 100.50. Going forward, the US NFP data will be of utmost importance.