The USD/CAD closed at 1.2507, just under half-a-figure lower on the week as rising oil prices and retreating US Treasury rates failed to inflict any substantial damage. The pair remained within the range of the past three weeks. One attempt at 1.2630 resistance on Tuesday was short-circuited by the US March Consumer Price Index, which sent the pair 60 points lower in an hour and over a figure before the day was finished.

March US inflation was marginally higher than forecast, 2.6% vs. 2.5% annually, and almost a point over the February rate of 1.7%, but it was not sufficient to provide a rationale for a Federal Reserve rate hike.

It was a bit surprising that the USD/CAD was positioned at the weekly high of 1.2630 just before the US CPI data, since the base effect of the March 2020 0.8% pandemic decline was a common topic in the market. 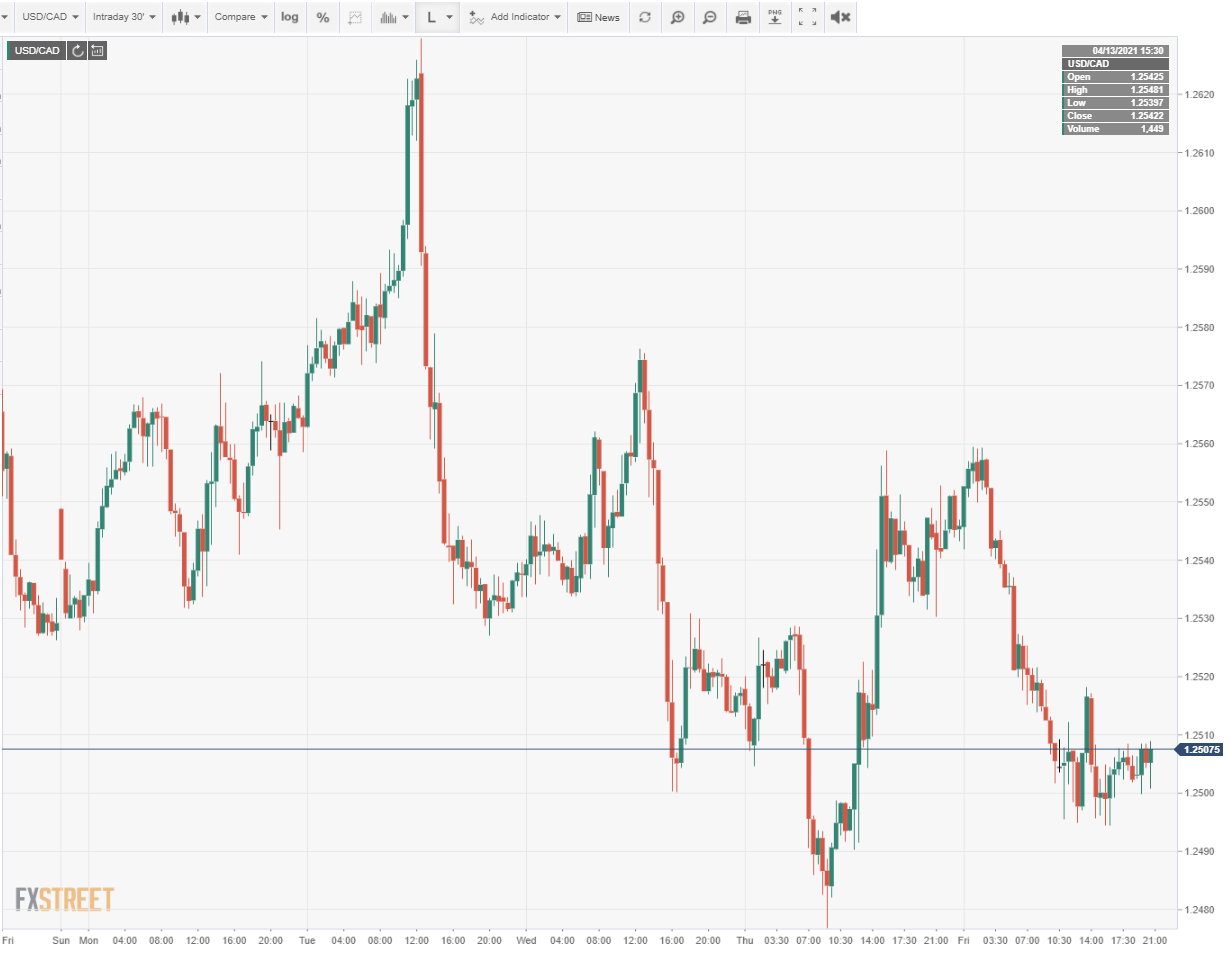 American Treasury rates slipped from their recent highs and were the main cause of the US dollar’s retreat. The 10-year yield lost nine basis points to 1.59% on the week but added six from Thursday’s finish at 1.53%, which was the first below 1.6% since March 11.

On the week, West Texas Intermediate (WTI) gained 6.3%, with the main move Wednesday’s 3.8% increase. The commodity is back at its level of early January last year before the pandemic struck. 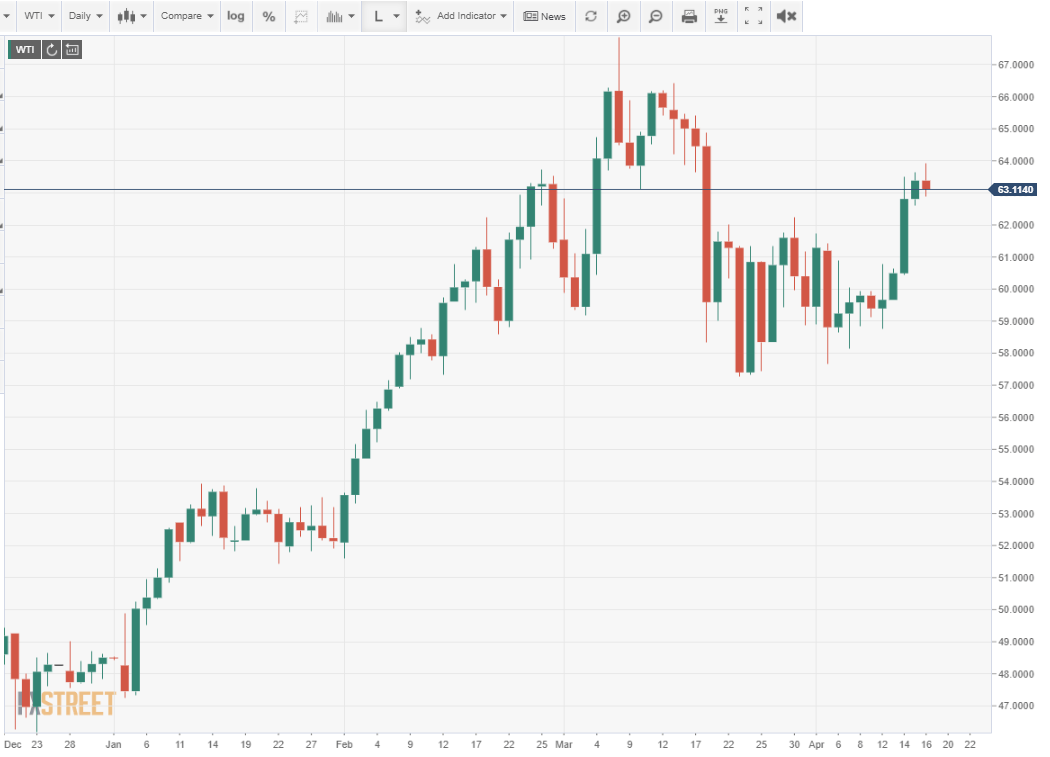 The loonie has not been affected so far by the shortage of vaccines in Canada, the rising case loads in Ontario and elsewhere or the contrast with the more successful US program.

There has been considerable speculation that the Bank of Canada (BOC) may be the first central bank to curtail its pandemic support program at this Wednesday's meeting.

Governor Tiff Macklem and other officials, particularly Toni Gravelle, have hinted that the bank could reduce its C$4 billion a week of government bond purchases. No change is anticipated in the 0.25% overnight rate target.

While the possibility of a reduction has received a good deal of press, markets may have gotten a bit ahead of reality. With COVID-19 rates on the rise in much of the country, the bank might easily choose to wait until the pandemic situation is more favorable.

Still, the expectation will make it difficult for the USD/CAD to rise until that policy question is settled on Wednesday. The BOC will also issue updated economic estimates that are expected to be much improved.

Technically, a re-entry to the descending channel that dates from last March, is a distinct possibility. The immediate border coincides with support at 1.2475 but with fundamental aspects dominating such would be incidental to the fortunes of the USD/CAD.

Canadian private employment rolls tracked by Automatic Data Processing (ADP) more than doubled in March to 634,800 from 271,700 in February, but after the excellent national numbers that was hardly unexpected. Wholesale and Manufacturing Sales in February were weaker than forecast but left no market imprint.

In the US, data confirmed the strong recovery in the first quarter.

Retail Sales vaulted 9.8% in March, far more than the 5.9% forecast, even beating the 7.6% burst in January. The federal government stimulus payment of $1,400 in March, like the $600 check in January, was largely responsible. The Control Group category of sales that enters the Bureau of Economic Analysis’ GDP calculation rose a cumulative 12.2% in January, February and March.

Sales seconded the excellent March payrolls, released on April 2, as did Thursday’s initial Jobless Claims report for April 9, which showed 576,000 filers, by far the lowest of the pandemic era. Stocks rallied on the news with the Dow reaching another all-time record, but Treasury yields and the dollar fell on Thursday.

The recent decline in Treasury yields is due to two factors.

First, US economic growth may or may not maintain its more than 8% expansion into the second and third quarters. Much depends on the final size and success of the Biden administration’s planned $3 trillion infrastructure spending. The March Retail Sales figures likely marked a top in consumption.

The second doubt is the ability of the US to avoid a general rise in COVID-19 cases and the potential economic disruption that would cause.

Neither is assured, but regarding the pandemic the outlook is promising with 3 to 4 million vaccinations daily.

Given the sharp sell-off in bonds this year, prices move inversely to yields, a profit pause was clearly in order. The overall trend in yields remains higher with the 10-year return expected to revert to more historical levels at or above 2% in the coming month, provided the US economy stays buoyant.

Fundamentally, the Canadian economy and its currency have profited from its position as a resource supplier to the US, China and other manufacturing centers. Commodity prices advanced this week  with the Bloomberg Index (BCOM) closing at its highest price since February 25 and WTI rose as well.

Canada stands to profit from the US expansion, even if its domestic generated growth is slower due to pandemic restraints.

Canadian bond rates have largely kept pace with those in the US largely mitigating one of the dollar’s key assets in other currency paris.

These factors have made the loonie a standout against the greenback this year.

That edge will  be enhanced if the BOC decides to begin its bond taper.

The BOC QE decision is the pivot this week with the market focus wholly instigated by the BOC.

Even if the Governor Macklem does not opt for a reduction this month, the BOC is closer to a change of policy than the Fed.

The USD/CAD should test support early in the week, with1.2500 and 1.2475 unlikely to offer much impediment, though a deeper move will wait for the BOC decision on Wednesday.

If the BOC tapers its QE program, the USD/CAD could drop below the old pandemic low of 1.2365, if not another attempt on 1.2630 resistance is likely.

February Wholesale and Manufacturing Sales were weaker than forecast but had no market impact.

Retail Sales were the main event.The nearly 10% burst in consumption was fueled by the federal stimulus payment and the confidence imbued by the excellent March labor market reported two weeks ago. Initial Claims showed good progress for the first time since November. The housing market remained very strong with both starts and permits beating forecasts in March.

Industrial Production in March came in at half its estimate but was an outlier in an otherwise impressive month. Consumer inflation was higher than predicted in March, and the base effect should continue through May. With the Fed's adoption of inflation averaging last September and the many statements by Chair Jerome Powell and other officials that low rates will remain until the economy is fully recovered, price changes have ceased to motivate markets. 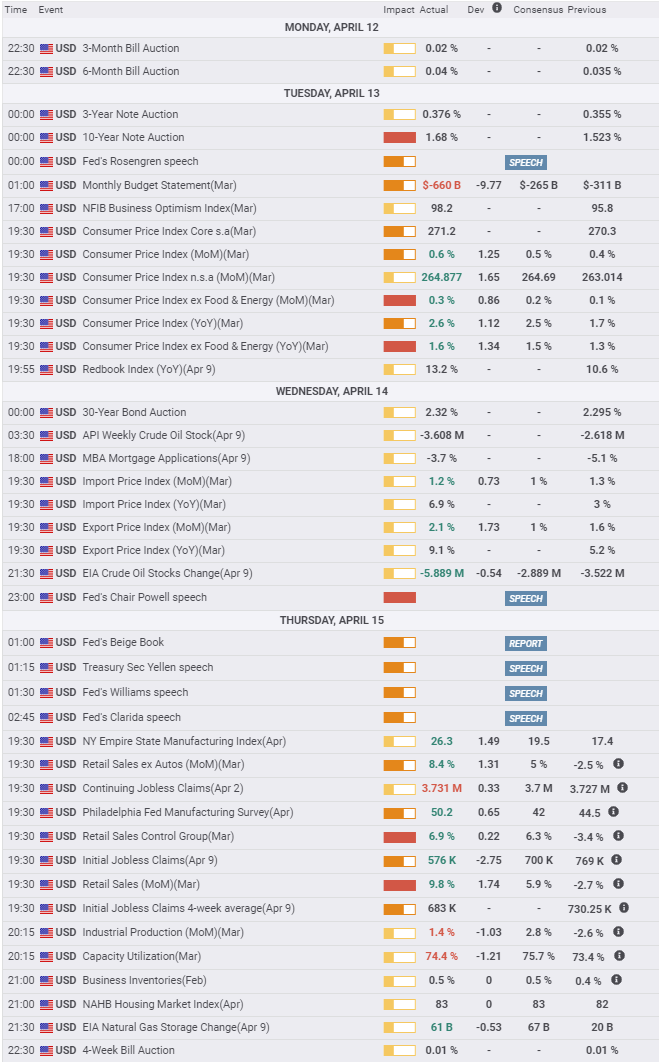 The BOC decision on tapering its bond purchase program is the fulcrum for the week. The bank has hinted that it is ready to begin, but with rising pandemic cases in much of the country the odds are probably even. 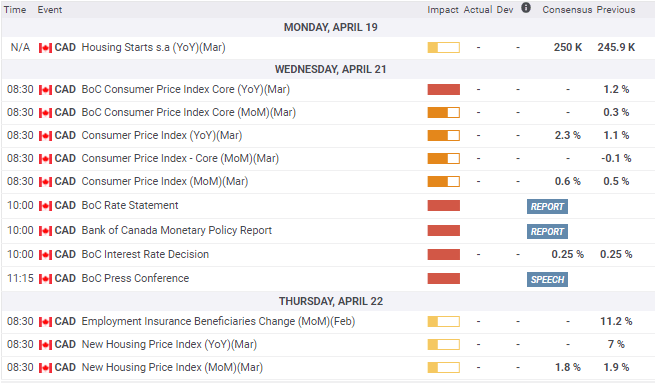 A thin week for US information. The housing market can be expected to remain strong in March with Existing Homes Sales, 90% of the US market, and New Home Sales, the balance, reported. Jobless Claims for the April 16 week have the most economic significance but little market impact. 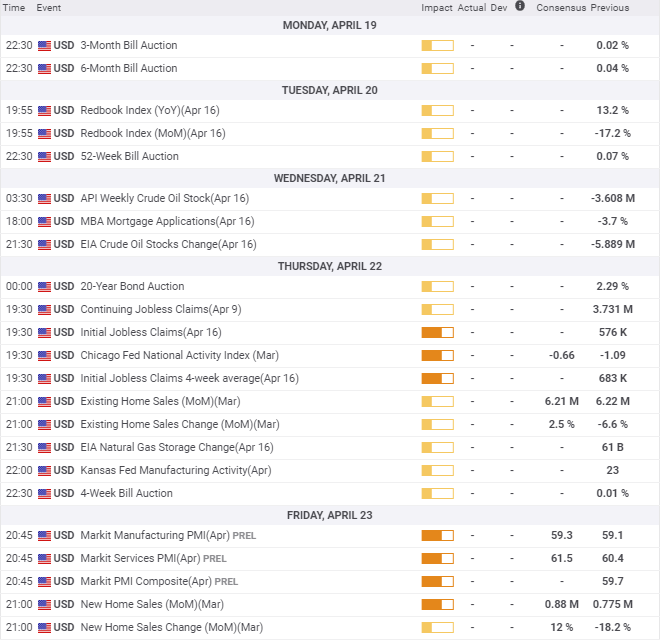 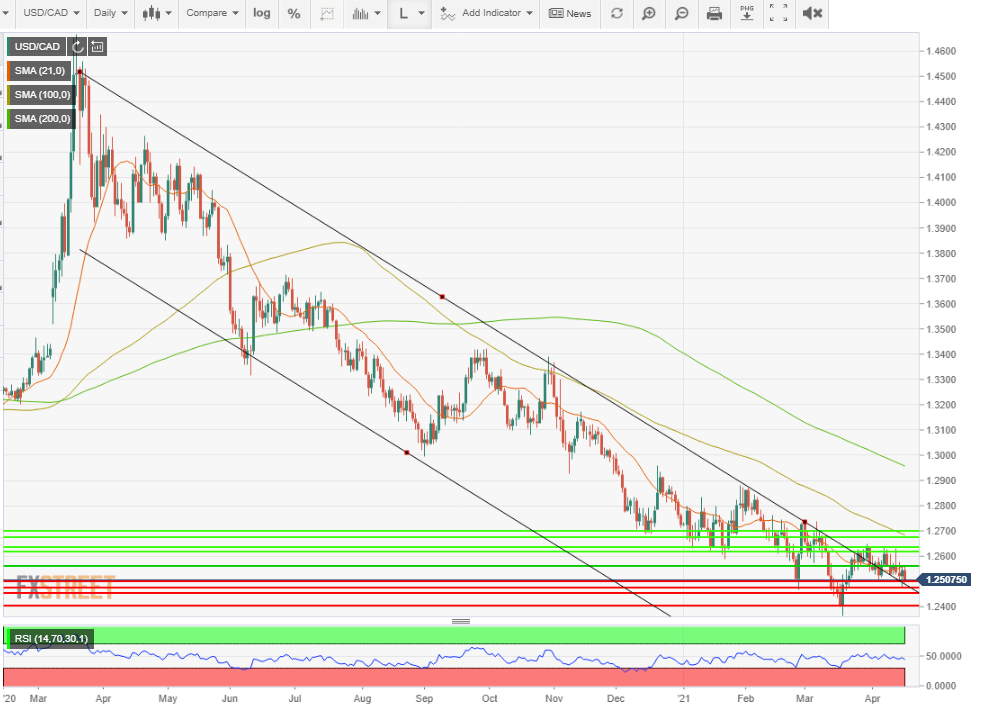 The technical pressure on USD/CAD is unabated. The Relative Strength Index at 43.96 having turned lower from Monday is a mild sell signal. The 21-day moving average (MA) at 1.2559 was traded through in both directions in the earlier part of the week, on Friday it became straigh resistance, coinciding with the line at 1.2560. Resistance levels have greater weight and are in endless supply if the market moves higher. Support is limited to the price action from the March 12 to 23 dip.

The technical aspect this week is likely to be overruled by the BOC decision on Wednesday. If the BOC does begin to taper its QE program, USD/CAD targets will move to the area below 1.2300.

The FXStreet Forecast Poll  is range-bound, approaching neither the March low at 1.2365 or the resistance at 1.2630. One side or the other will likely be outmoded after the BOC decision on Wednesday.

EUR/USD remains pressured below 1.21 ahead of critical US CPI data

EUR/USD is under pressure below 1.2150 as the dollar benefits from concerns over the escalation in the Middle East and fears of rising interest rates.

GBP/USD is trading above 1.41 but below the highs. The risk-off mood boosts the safe-haven US dollar, while sterling is underpinned by upbeat UK GDP data. The economy shrank by 1.5% in Q1, better than expected. US inflation data is awaited.

Gold: All eyes turn to inflation data for gold's next big move

Gold price remains on the back foot around $1830, unable to clear a minor resistance near $1836 despite a pause in the US dollar’s advance. That barrier appears to be the horizontal 50-SMA on the hourly sticks.

American consumer prices are set to rise by the most in a decade as the base effect from last year’s pandemic collapse reaches its height. The Consumer Price Index (CPI) is expected to climb 0.2% in April.