The USD/CAD pair attracted some dip-buying on Tuesday and built on its recent bounce from the vicinity of the key 1.2000 psychological mark, or multi-year lows touched earlier this month. The momentum pushed the pair to over one-month tops, though bulls struggled to capitalize on the move beyond the 1.2200 mark. The intraday positive move was exclusively sponsored by a goodish pickup in the US dollar demand, supported by expectations of a slightly less dovish Fed. The markets might have started pricing in the prospects for an earlier stimulus withdrawal amid worries about rising inflationary pressure.

The concerns were further fueled by the hotter-than-expected US Producer Price Index, which rose 0.8% MoM in May and accelerated 6.6% on a yearly basis. Separately, the US monthly Retail Sales fell short of market expectations and dropped 1.3% MoM in May. Adding to this, both Core Retail Sales (excluding autos) and the closely watched Retail Sales Control Group fell 0.7% as against consensus for a reading of +0.2% and -0.6%, respectively. The weaker-than-anticipated prints, however, were offset by an upward revision of sales in April. This, along with an uptick in the US Treasury bond yields, underpinned the greenback.

On the other hand, an extended bullish run in crude oil prices extended some support to the commodity-linked loonie and kept a lid on any further gains for the major. The continuous improvement of the coronavirus situation in the United States and much of Europe has been fueling optimism for a strong recovery in the fuel demand. The black gold got an additional boost and climbed beyond the $72.00/barrel, for the first time since October 2018 after data from the American Petroleum Institute showed a larger-than-expected draw in US crude oil supplies. Investors also seemed reluctant heading into this week's key event risk.

The Fed is scheduled to announce its monetary policy decision later during the US session. Investors will be closely watching for clues about a possible change in the policy outlook and if members have already started the discussion to taper the current $120 billion in monthly bond purchases. This will play a key role in influencing the near-term USD price dynamics and provide a fresh directional impetus to the major. In the meantime, Canadian consumer inflation figures will be looked upon for some trading opportunities during the early North American session.

From a technical perspective, the overnight positive move validated a near-term bullish breakout through the 1.2140-45 supply zone and a bullish rounding bottom chart pattern. A subsequent strength beyond the 1.2200 mark will reaffirm the positive outlook and prompt some technical selling. The next relevant hurdle is pegged near the 1.2265-70 horizontal support breakpoint, above which the pair seems all set to climb towards reclaiming the 1.2300 round figure. The momentum could further get extended towards May swing highs, around mid-1.2300s.

On the flip side, any meaningful slide below the 1.2160 horizontal level might still be seen as a buying opportunity and remain limited near the 1.2130 area. This is followed by the 1.2100 mark, which if broken decisively will negate any near-term bullish bias. The pair might then turn vulnerable and accelerate the slide towards intermediate support near the 1.2050-45 region. Bears might eventually aim to challenge multi-year lows, around the key 1.2000 psychological mark. 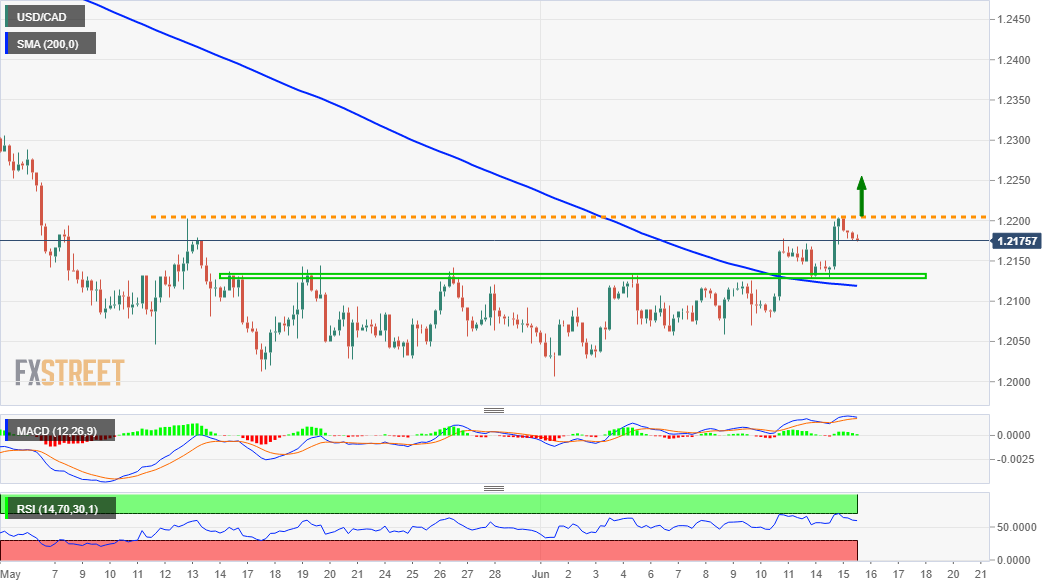