The Canadian dollar has lost ground on Friday, erasing most of the gains seen on Thursday. Currently, USD/CAD is trading at 1.3336, down 0.37% on the day. On the release front, there are no Canadian events. In the U.S., UoM consumer sentiment is expected to improve to 98.1. As well, the Treasury department releases its semi-annual currency report.

There was some positive news on the U.S. inflation front, as key indicators headed higher in March. CPI, the key gauge of consumer spending, climbed to 0.4%, its highest gain since January 2018. The producers price index also looked strong, climbing 0.6%, a 5-month high. Inflation remains well below the Federal Reserve target of 2.0%, but stronger inflation numbers will bolster the case of Fed officials who favor raising rates in 2019 if the economic outlook improves. The Fed minutes from the March meeting left the door open to further rate hikes this year, but current market pricing suggests no hikes until 2020, and some analysts are expecting a cut in rates later this year.

Earlier in the week, the IMF downgraded economic forecasts worldwide, and Canada was no exception. The IMF lowered its forecast for the Canadian growth from 1.9% to 1.5%. The report noted that Canada would be a major beneficiary if the U.S and China can hammer out a deal and end their bruising trade war. The IMF also lowered its forecast for global growth, from 3.5% to 3.3%. 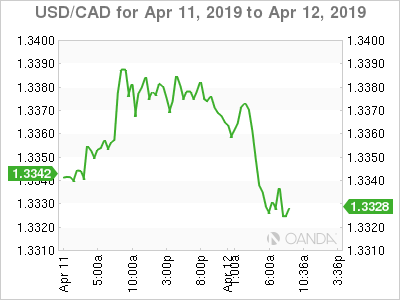