Global stocks retreated sharply on Tuesday as concerns about the new variant of the coronavirus rose. In the United States, futures linked to the Dow Jones index declined by more than 1.1% while those linked to the Nasdaq 100 index declined by more than 1.5%. It was also a sea of red in Europe, where indices like the German DAX and FTSE 100 declined by more than 1%. This drop happened after the Chief Executive at Moderna warned that existing vaccines will struggle with the current variant. He also said that it will take months for companies to come up with a jab specific for this vaccine. There are also additional concerns about future variants of the disease. Some of the worst-performing stocks were those in the hospitality industry.

The euro rose against the US dollar and the British pound after the strong Eurozone inflation numbers. Data published by Eurostat showed that the bloc’s headline consumer price index (CPI) rose from 4.1% in October to about 4.9% in November. This was a bigger increase than the median estimate of 4.5%. On a month-on-month basis, the bloc’s inflation declined from 0.8% to 0.5%. Other flash inflation numbers from countries like Germany, France, and Italy have been relatively strong as well. Still, it is unlikely that the European Central Bank (ECB) will change its policy since it believes that the current pace of inflation is transitory.

The Australian dollar was little changed after the latest China manufacturing and services PMI numbers. According to the National Bureau of Statistics, the country’s manufacturing PMI rose from 49.2 in October to 50.1 in November. This was a better number than the median estimate of 49.6. It was also the first time in two months that the PMI has been in an expansionary zone. The services PMI declined from 52.4 to 52.3 while the composite PMI rose from 50.8 to 52.2. These numbers show that the country’s business activity is improving. Elsewhere, in Australia, the private sector credit declined to 0.5% while building approvals declined by 12.9% in October.

The AUDUSD pair has been in a strong bearish trend in the past few weeks. This momentum has waned recently as investors focus on the Omicron variant. The pair is trading at 0.7130, which is slightly below the key resistance level at 0.7170. The price is also slightly above this week’s low at 0.7090. On the four-hour chart, the price is below the 25-day moving average. Therefore, there is a likelihood that the pair will retest this week’s low as the variant concerns remain. 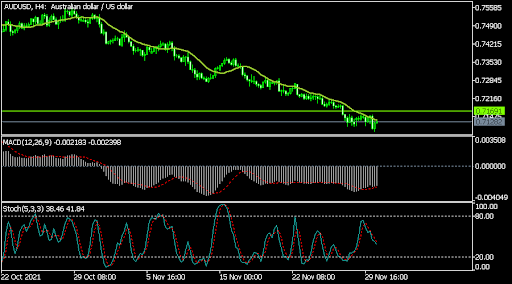 The EURUSD pair rose to the highest level since November 22. On the four-hour chart, the pair rose above the 23.6% Fibonacci retracement level. It also crossed the 25-day and 15-day moving averages while the Relative Strength Index (RSI) has been in a bullish trend. It also moved slightly above the neckline of the inverted head and shoulders pattern. Therefore, the pair will likely keep rising during the American session. 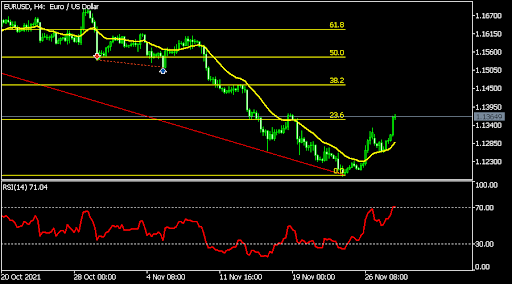 The USDCHF pair declined sharply as the US dollar retreated. The pair declined to a low of 0.9177, which was the lowest level since November 14. The pair has managed to erase most of the gains it made in November. It also crashed below all moving averages and is along the lower line of the Bollinger Bands. Therefore, the pair will likely keep falling. 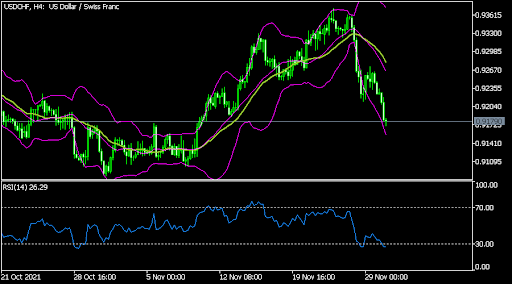