Since 1 June, the US Federal Reserve (Fed) has been scaling back its balance sheet, limiting the reinvestment of maturing debt in its securities portfolio. Assuming that the pace of disposals stays at the announced level, the Fed could shrink its balance sheet by around USD1,600 billion over eighteen months.

The Fed’s securities portfolio (assets on its balance sheet) will automatically reduce, whilst a share of its liabilities, the cash placed with the Fed by commercial banks and/or money market funds, will be destroyed. In 2019, the Fed’s first experiment in quantitative tightening (QT1) had to be halted: it had exhausted the “excess” reserves over and above the liquidity constraints applied to the banks1 and caused the money markets to seize up.

It is true that this time around, reserves with the Fed (USD3,200 billion at 15 June, compared to USD1,400 billion at the time of the repo market crisis in September 2019) and the Fed’s outstanding repurchase agreements with money market funds (USD2,200 billion at 17 June) represent significant reserves of liquidity that should help lessen the shock of this tightening. However, it seems unlikely, in the short term at least, that money market funds will reallocate much of the cash placed with the Fed to T-bills, due to the attractive yield on the facility and the scarcity of T-bills. What is more, in the absence of sufficient investor appetite for long-term securities, primary dealers could be forced to expand their inventories and seek new financing from money market funds. But most such primary dealers are subsidiaries of major banks, whose leverage ratios are already flirting with minimum regulatory requirements. Balance sheet constraints could thus hamper the start of QT2.

Changes on the liability side of the Fed’s balance sheet 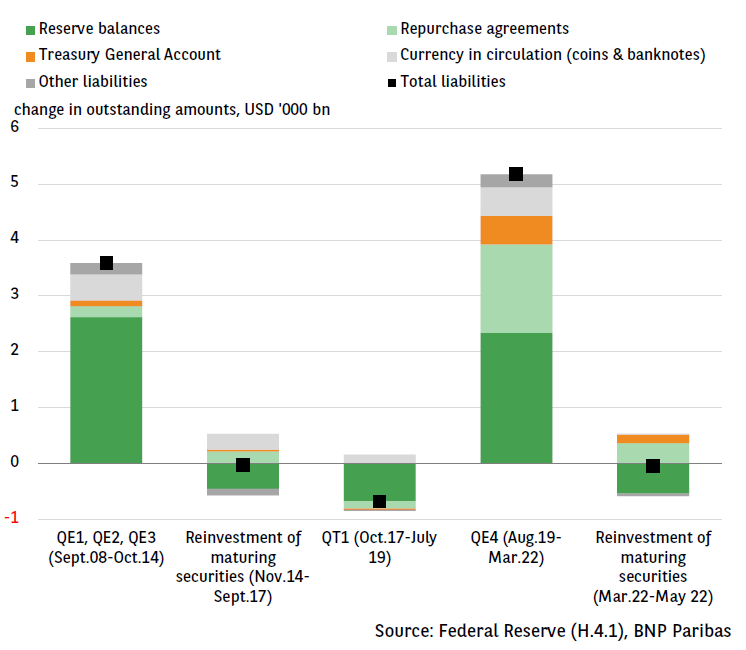