Outlook: The exact data numbers yesterday are not what’s important, although some nit-pickers will make an effort. What’s important is that US retail sales and industrial output both rose for the 4th month.

We are so attuned to moment-by-moment changes that we tend to forget real economic activity is on a far slower timetable. The response effect to something that happened in March may take until May or June to show up. Remember that the University of Michigan consumer confidence index was so low the other day? It was not useful to extrapolate that into lousy retail sales—yet. Seek what they do, not what they say—and line things up with a cupful of lag.

The other event yesterday was Fed chief Powell affirming that even rising unemployment, if that’s what we get, will not drive the Fed to chicken out from its Knights of the Roundtable quest to tame inflation.

Today the data plate contains housing starts and mortgage applications, with the usual whining about affordability. We also get Canadian inflation.

Two possible areas of fresh news—eurozone inflation from Austria and Portugal while G7 finance ministers are meeting in Germany. We have no advance information about what G7 has in mind. Will it come up with any initiatives? The most needed are consensus on proceeding against Russia and agreeing on at least some aspects of inflation. The oil and gas markets are the obvious targets. But don’t hold your breath.

The dollar has the clear relative rate advantage and we can hang onto that as the core reason to expect it to return from the corrective pushback we are seeing now. We sometimes choose to trade countertrend when the signal is strong enough. It works only about half the time.

Tidbit: It may seem that concerns about the central banks’ “neutral rates” is a central issue, not a tidbit, but remember that the neutral rate is imaginary.  It’s the hypothetical rate at which inflation is steady. The FT calls it a Goldilocks number and offers an essay on how nobody can agree on it. We say nothing is more damaging to the economics profession than experts not being able to agree on a theory that is used as the basis for policy.

The essence of the problem is that all the equilibrium concepts used in economic modelling point to a fictitious single point in time surrounded by dynamic changes. Of course equilibrium never gets met… the same way a company balance sheet is for a moment in time that has already passed. In other words, the neutral rate appears static and is spoken of as a fixed thing when reality is ever-changing. 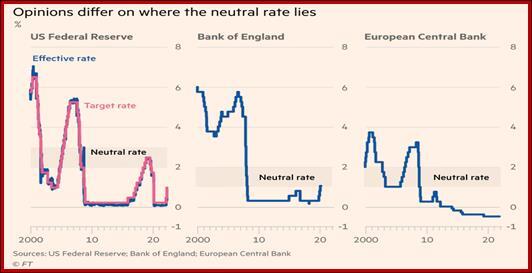 See the charts. We find two other important sentences in the FT essay, starting with ECB chief Lagarde. “Lagarde has made clear that the ECB, which has yet to raise its deposit rate from minus 0.5 per cent but is expected to do so for the first time in a decade in July, aims to ‘normalise’ rather than ‘tighten’ monetary policy, moving towards the neutral rate but not beyond it.” This refers to the Fed saying it will let inflation “run hot” in order to get the averages where they are acceptable. Apparently Lagarde thinks she would get run out of town on a rail if she accepted “running hot.”

The other useful remark is from former BoE official Vicky Redwood, now at Capital Economics: “If high inflation has become more ingrained than we think, then a Volcker-shock style recession probably will be required.”

Like contagion in dumping certain high-risk assets as we have seen in various earlier crises, prominently the emerging market crash started by Long-Term Capital in 1998, we struggle with the concept of the neutral rate and whether overshooting it is a valid and reasonable procedure. If a target is a range and not a single number and if averaging is an acceptable (or necessary) process with something so slippery, overshooting seems reasonable if not necessary.