The latest polls foresee a very balanced result, with a very slight advantage for the Conservative over the Labour, but with both needing to form a coalition with parties such as the SNP, the UKIP or the LibDems if they want to reach Downing Street. Markets will not be ignorant of the results and the subsequent negotiations to form a government, and uncertainty could hit the GBP and British equity markets.

Ahead of the voting we take a look at our contributors' thoughts on the event and the effects it may have on the markets. 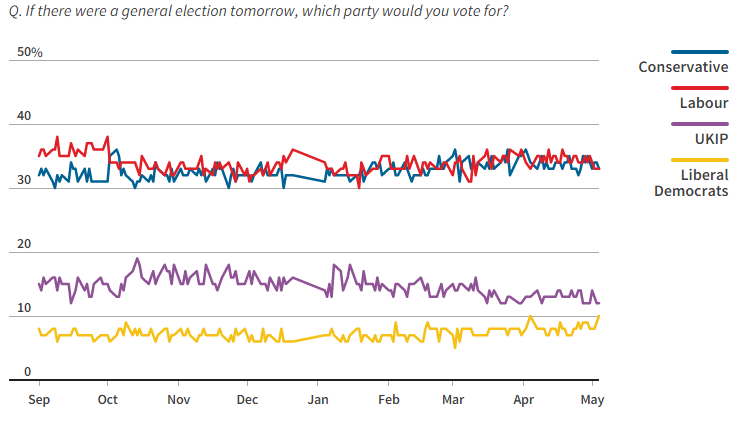 Being quite bullish on the Pound, our Chief Analyst acknowledges the strength the Pound has experienced lately against its major counterparts: Ã¢â‚¬Å“Poor UK GDP readings for the first quarter of 2015 were erased by even worse developments in the US, whilst the ECB's decision to launch QE in Europe has kept the EUR subdued against all of its major rivalsÃ¢â‚¬Â.

On her analysis, Bednarik also mentions the gains for the Pound against the US Dollar after prior elections before concluding that this time, weighing the uncertainty carried by the possibility of a Hung Parliament and Brexit talks, the market could Ã¢â‚¬Å“act 'sell the rumor, buy the fact', with Pound probably under pressure until Thursday, and regaining the upside afterwards, should the outcome result less dark than expectedÃ¢â‚¬Â.

Ridgeway believes this UK Election matters for the traders, arguing Ã¢â‚¬Å“the sterling will likely suffer as the uncertainty over economic policy or a vote on Europe, just like the Scottish referendum, will bring with it a hiatus for business decisions being made and deals being doneÃ¢â‚¬Â.

The analyst, though, thinks Ã¢â‚¬Å“an election with no clear outcome could be the best result for financial markets in the short-term. If no party has a clear majority, then passing legislation will be a near impossibility, so consequently the status-quo would remainÃ¢â‚¬Â.

Ridgeway also takes a look back on past elections to learn some lessons. He sees that Ã¢â‚¬Å“market volatility tends to increase in the 15 days before an election, and then increase further in the days afterwardsÃ¢â‚¬Â and remembers Ã¢â‚¬Å“how quickly UK markets became unsettled in the run-up to the Scottish referendumÃ¢â‚¬Â.

Possible Scenarios on EURGBP and GBPUSD

Kathleen Brooks, Matt Weller and Fawad Razaqzada, Technical Analysts at FOREX.com: Ã¢â‚¬Å“EURGBP may be the currency pair to play if the UK election results in a pound-bullish outcomeÃ¢â‚¬Â

These analysts also take a look at the technical levels of the GBPUSD, pointing to a possible bearish run. They acknowledge that Ã¢â‚¬Å“if we do see a pound-negative election result (a hung parliament or, to a lesser extent, a fractious coalition), GBPUSD could resume its downtrend for a possible test of the next level of converging previous / Fibonacci support in the 1.42-1.43 areaÃ¢â‚¬Â.
Feed news Join Telegram