What’s next for trade talks with China and the U.S.?, Emerging markets face the middle-income trap, CECL provides more insurance for the financial system

In geometry, we’re taught that the shortest distance from A to B is a straight line. In economics, everything is described by a curve.  And in political science, we learn that policymaking can be a long and winding road.

Trade negotiations between China and the United States took a sudden turn last week, when the White House announced new tariffs.  China responded early this week with countermeasures.  These provocations came as a rude awakening after three months of negotiations that seemed to be on the brink of success.

While abrupt, the reversal of course was not altogether unexpected.  As we noted several weeks ago, trade negotiations are difficult, and ratification of agreements can be more so.  The issues being discussed are complex, and they are part of a large, complicated economic and strategic relationship between the two countries.  Consensus is still possible, but it may take longer to reach.  The consequences of delay for the global economy could be substantial.

Last week, the United States increased tariffs on $200 billion of imported goods from China and threatened to extend the tariffs to an additional $325 billion of products.  The new measures were prompted by allegations that China had retreated from commitments made during negotiations.  China has denied this assertion, and has retaliated by increasing tariffs on $60 billion in goods imported from the U.S.

A review of how tariffs operate is in order.  Counter to popular belief, the target country’s government does not pay the tariff: it is paid by domestic importers from that country.  In the short-term, this prompts importers to do one (or a combination of) three things:

As a result of these effects, the tariff is a kind of tax largely paid by U.S. consumers and shareholders.  But American negotiators feel that the current backdrop of strong economic growth and strong markets mean these costs can be absorbed comfortably.

Over the longer term, tariffs may cause consumers to shift away from Chinese products, and U.S. firms to shift supply chains to reduce reliance on China.  Whereas a 10% tariff may not have been enough to prompt this reorientation, a 25% tariff might be.  This is why economic projections show that the new measures will hit China much harder than the United States.

“The longer that tariffs last, the more likely that production will shift out of China.”

American negotiators have been betting that the Chinese economy would not be able to withstand an extended trade conflict.  While China’s dependence on exports has fallen during the past five years, it still relies on overseas sales to a greater degree than does the United States.  The increase in tariff rates and the potential for them to spread to a broader community of products will further the discomfort faced by Chinese producers and make it more difficult for them to compete in U.S. markets.

China’s financial condition has become more tenuous during the past decade.  Total debt as a percentage of gross domestic product has doubled in the past decade, and credit losses are increasing.  Chinese President Xi Jinping has recently highlighted the importance of financial stability. In 2017, the government took steps to curb credit, trading strength for stability and causing growth to moderate.  That moderation has been extended by uncertainty over trade conditions, which has taken a bite out of both production and consumption. 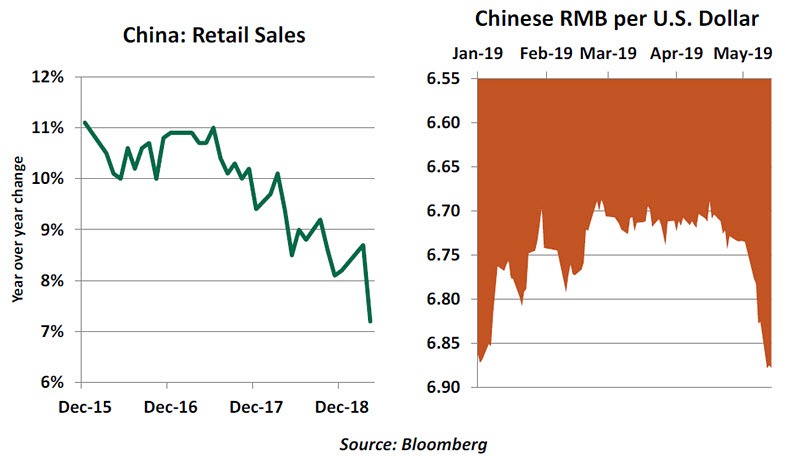 China has the means to buffer the impact of the trade war, and has been using them effectively.  Credit has been eased, and the government is spending strategically to sustain economic growth.  But the impact of the escalation in trade tension has already been reflected in the value of the Chinese currency and in the level of Chinese equity markets.  Chinese shares have lost 10% of their value over the past month.  Any further deterioration could cause further damage to consumer and business confidence.

China has been expecting political considerations to lead the U.S. to conclude an agreement.  The government believed President Trump wanted to make a deal in order to demonstrate progress on his foreign policy program.  This may have been a miscalculation on two fronts.  First, the White House seems to be scoring political points by taking a hard line.  And secondly, political capital is most valuable when accrued close to Election Day.

As the two titans battle it out, a series of other countries are caught in the middle.  Emerging Asian economies that supply China are seeing orders cut.  Australia, which sells China raw materials and takes in its tourists, may be at risk for its first recession in 28 years.  And Germany, as we covered in a recent note, may be facing new hurdles.

“As we’ve noted before, there are no winners in a trade war.”

At the moment, the rhetoric between China and the United States has gotten sharper.  The provocation now includes U.S. restrictions on the purchase of Huawei telecommunications equipment, a blow to one of China’s national champions.  The next key milepost in the process is the G-20 meeting in Japan at the end of June.  Presidents Trump and Xi will both be in attendance; they have shared productive conversations during past encounters.  Further, and more fruitful, discussions could be initiated at that time.

There is a Chinese proverb that at the 90th mile in a 100 mile journey, you are only halfway there.  The last miles on the road to trade peace may be difficult to traverse, but things should be fine as long as the destination remains in sight.  Nonetheless, the risk has risen of a sustained U-turn that would cause deeper and more widespread economic damage.

Globalization has generally been good for countries.  Low-income countries at nascent stages of economic development have the most to gain, as their entry to global systems reduces extreme poverty and boosts incomes.  Moving from low- to middle-income status is great progress, but many nations fail to continue into the highest income bracket.  Countries in this middle-income trap struggle to continue competing internationally for growth.

Growth for developing markets comes in phases.  Urbanization and industrialization occur first and spur high growth.  Thereafter, countries often experience prolonged stagnation and struggle to remain competitive.   An important obstacle is a country's inability to continue the process of moving from low value-added to high value-added industries.  Capabilities that enhance productivity (from low-productivity to high-productivity activities) can be elusive.

Income inequality also hinders countries trying to escape a middle-income trap.   Greater distance between winners and losers often leads to a backlash against market-oriented reforms and the inflow of capital.  Poland serves as a good example; inequality across income groups remained low as the country successfully transitioned from the middle- to high-income group in less than two decades.

“Many countries stall in their economic development.”

According to World Bank data, only a handful of middle-income nations have managed to escape the trap since the 1960s.  South Korea, Taiwan and Israel are notable success stories.  Gaining comparative advantage in the production of sophisticated products and improving the quality of education have been pivotal to South Korea’s success.  These nations have also invested in improving governance and avoiding corruption.  Combined, these factors have led to improved productivity, higher investment, and the rise of competitive corporations. 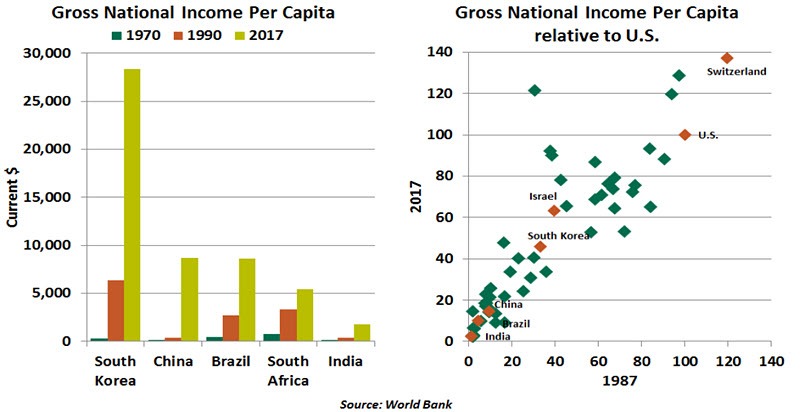 By contrast, countries like Brazil and South Africa are stuck in the middle-income trap.  In addition to some of the above mentioned causes, kleptocracy has also played its part.  China still has the potential to escape the trap, but its industrialization policy has some resemblance to the ones adopted by Latin American economies in the postwar era.  These policies do bear fruit but ultimately leave nations in a pool of debt.

Chinese policymakers have increasingly focused on building a high-value exports industry to steer away from the trap.  But China’s move up the value chain in sectors like robotics and artificial intelligence has become a point of contention in the current U.S.-China trade negotiations.

So the formula for escaping the middle-income trap includes improving governance (reducing bureaucracy and graft), stressing quality education, eliminating constraints on economic activity and providing social safety nets.  Together, these measures not only boost productivity and private sector participation, but also help in reducing income inequality.

Embracing and implementing these strategies will not be easy in many places.  But they are essential if developing countries want to continue progressing.

Every loan carries a risk of default.  Lenders must set aside reserves for loan losses, but the approach for doing so in the United States is about to change substantially.

Starting next year, the Financial Accounting Standards Board’s (FASB) Current Expected Credit Loss (CECL) standard will require banks to set aside reserves for expected loan losses over the full life of the loan.  This contrasts with the current, rather simple, convention of booking reserves only when a borrower begins to show some likelihood of defaulting. FASB is concerned that banks may carry insufficient reserves to endure a sudden change from a strong economy to a credit crisis.

Lenders will now rely on economic forecasts and statistical models of credit losses to predict future loan losses.  While this application is novel, credit risk modeling itself is not new: for example, the FICO score is a way to express a consumer’s probability of defaulting on a new loan.

“CECL is designed to provide more insurance against a banking crisis.”

Some observers have criticized CECL for being “pro-cyclical,” creating a risk of amplifying the severity of downturns.  Models may overcompensate when economic conditions worsen, and many banks have changed lending strategies, so past losses may not be comparable to future experiences.  If risk models yield results that show a need for a large, immediate increase to loss reserves, banks will tighten lending standards just when the economy most needs loans.  Alternative research disputes this concern, but the final outcome won’t be known until lenders experience a recession. 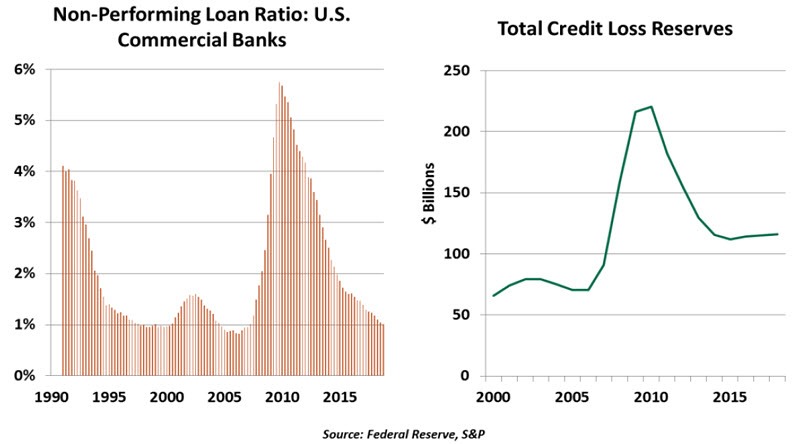 The concern driving CECL is legitimate.  Banks were indeed underprepared for the losses experienced in the 2008 global financial crisis, leading to government intervention that we never wish to repeat.  Since then, banks have been asked to hold more capital and enhance liquidity.  CECL is intended to expand on this foundation by building reserves against loss during good times.

All banks are currently working to ensure compliance with CECL.  If we agree with Ben Franklin’s aphorism that an ounce of prevention is worth a pound of cure, the financial services industry will be well-fortified against the next crisis.