In today's blog, I'm going to go through and cover some of the ideas I have been considering. I am looking mainly at two different stocks and trying to make my own decisions around them. The two companies that I'm looking at in question are Coca Cola and Pepsico, and I am specifically looking at the Australian and the US markets.

You may be wondering why I'm looking at these two, if you recall, just in the last week or two, we have seen stocks behaving a little differently than throughout much of the pandemic. There has been a little bit of a rotation, a change in human sentiment about what the economy is going to be doing soon. The evidence for this is based off what we can see in stock prices, much of this year tech stocks and highflyers have been driving the gains, while the rest of the market lags. Last week and this week on Monday, losses and gains have been broad-based, in fact on Monday Financial and Energy sectors were the daily leaders.

And to me that says that investors are starting to look closer at cyclical stocks, those pre-pandemic earners.

Looking at the Pepsi and Coca Cola theory, why do I think they are going to be improving? Well, a lot of the stocks from what I can see on this rotation have been coming from a cyclical side, and therefore they are companies that were doing well before the pandemic and are likely to improve post-pandemic, not just Pepsi and Coke.

In a post-pandemic world, after massive waves of stimulus and inflation, we would get an improvement in the jobs markets, in consumer sentiment and spending. Eventually, as people buy products, return to bars and go out for dinner, it trickles into those cyclical stocks as well. Pepsi and coke are not the only stocks in this category; there are just too many to list.

When we look at Pepsi and Coca Cola, I see them as being undervalued, and I feel that there is still room for them to grow. Their quarterly earnings have shown promise, they have had consistent improvements after the initial pandemic driven fall. Pepsi has been lagging their expected earnings whilst Coca Cola has been ahead of them, but this year the numbers are not quite as significant as the management.

Eventually, all of this will come round trip; timing is perhaps the biggest issue that faces all cyclical and dividend earning shares. To some, holding some risk over an extended period is not a problem; to others, it goes against all preservation of capital instincts. 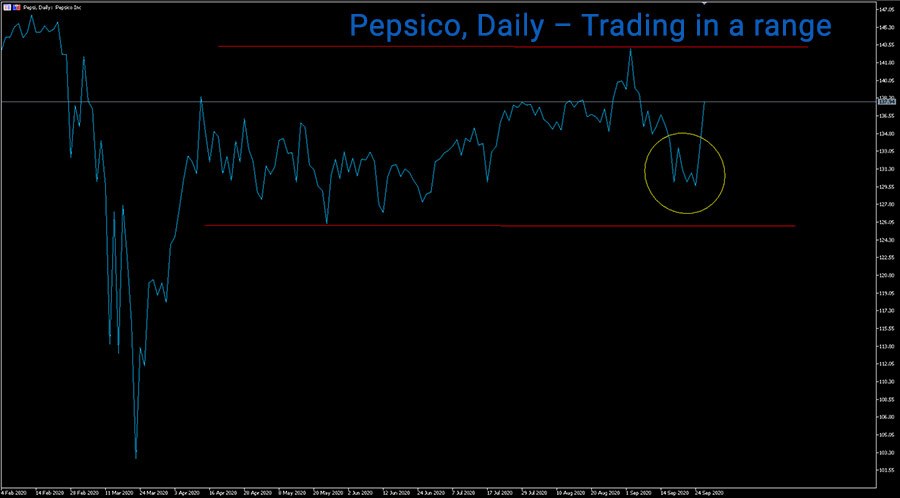 Pepsico, Daily – Trading in a range